Vagina grooming: Brightening up 'down there' is big business

Hilary Fannin: Just as we started letting our Brazilians grow out comes a new luminiser 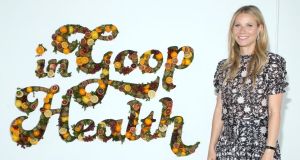 Forgive me if I’m telling you something you already know, but I’ve just crawled out from under a stone and discovered there’s a new beauty product on the market (actually, beauty products – plural – on the market) specifically designed to brighten up the vagina. Yep, some entrepreneurial boffin out there has had the brass neck to develop vaginal make-up, or skincare, and apparently it’s flying off the shelves.

Holy cow, just as the tide seemed to be going out on glittering vajazzles, just as the adhesive rhinestones were biting the dust and the stick-on diamanté was becoming unstuck, just as we were letting our Brazilians get straggly and using our thongs as catapults to fell strong horses, we are being asked to embrace a vagina luminiser.

The range of beauty products available for purchase apparently includes a wash, an exfoliator, a serum, a couple of creams, a mist (of a type that doesn’t roll in from the Mull of Kintyre) and, of course, the aforementioned luminiser. (I should probably point out here that I have absolutely no idea what a luminiser actually is or does, unless it encourages one to glow in the dark.)

I did once mistakenly purchase a pubic-hair dye kit, thinking it was something to unblock the drain

These supposedly innovative products were launched in Hong Kong and, unsurprisingly, the “early adopters” were young girls who go to spas and salons, as opposed to cackling old bags like me who sit around eating bread and butter, sipping black pudding-flavoured gin and scoffing up their greasy sleeves at the antics of youth. (Although, hang on, come to think of it, I did once mistakenly purchase a pubic-hair dye kit, thinking it was something to unblock the drain.)

A cosmetic range specifically targeting our nether regions is hardly that much of a novelty, given that “lady garden” grooming is already big business. From supermarket and pharmacy shelves to beauty salons and spas, the range of products and services available to encourage pubic waxing, shaving, pruning and zapping is plucking staggering. I read recently that “in terms of women’s body hair, the landscape has always been very removal-centric”, which just might qualify as one of my favourite sentences of all time.

Man alive, that’s a hell of a lot of hot wax being dripped on to American genitals

Apparently, the balder you choose to become, the more money it’ll cost ya; depilation don’t come cheap. The word in the glossies is that it’s all about maintenance, and unless you want to look like a stubbly old turkey who’s uncomfortably close to its sell-by date, you’ll probably need to invest in a “vagina facial” (also known as a “vajacial”) to keep the skin “supple and moisturised”.

In the course of researching this column (and believe me, when I say research I mean that I flicked through a couple of random magazines in the dentist’s waiting room while trying to think of an excuse for forgetting to floss), I read that in the US it is estimated that a woman might, over the course of her lifetime, spend approximately $10,000 (more than €8,000) on removing her pubes. Man alive, that’s a hell of a lot of hot wax being dripped on to American genitals.

And there was I thinking that in these days of activism and veganism and new-wave feminism, things might be changing. I’m pretty sure I read somewhere that “bush is back”, and it wasn’t referring to George W.

What, you might ask, about all those fish swimming around our oceans with a bellyful of microbeads from exfoliating cleansers, and what about single-use plastic razors? Aren’t we all supposed to be eschewing chemicals and non-biodegradable materials and generally embracing natural products? Can’t we be happily hirsute?

Gwyneth Paltrow, for example, who knows absolutely everything about everything (including the medicinal benefits of squatting over steaming buckets of mugwort), told chat-show host Ellen DeGeneres recently that she was “working a Seventies vibe ‘down there’”, and I don’t think she meant an avocado bathroom suite.

Don’t look at me, mate. I know nothing. I wouldn’t recognise a luminiser if it jumped up and bit me in the backside (which, apparently, is one of its flaws). There are enough young women in this porn-fuelled, Barbie-smooth epoch wilting under the pressure to achieve some unattainable level of perfection without being told, subtly or unsubtly, that they are less than they should be, that they don’t quite qualify in the game of good grooming, unless they’re refining, renewing, refreshing and revitalising their vaginas. It’s a pretty depressingly awful message to be sending to our daughters, eh?

What’s next? Shake ’n’ Vac for the uterus?

Barbara (83): ‘I light candles because they make me feel somebody is here’