‘We sold them a house, now they’re coming for Christmas dinner’ 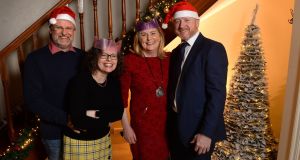 Did 2020 turn out the way you expected it to? If it did, it’s safe you say that you are in a very small minority. The pandemic dashed several plans in the last 12 months, and so it goes for the festive season.

While Christmas has long been the one time of year in which traditions and rituals remain unsullied, this year’s Christmas is looking unexpectedly different for many people, for better or worse. We spoke to a few of them about how when it comes to celebrating the festive season, things will be different for them this time around.

The estate agent, the buyer and a Christmas invite

When auctioneer Fintan Cahill sold a house in Virginia, Cavan, to Rolf and Denise McLoughlin back in February, no one involved had any idea of what was just around the corner.

“We were actually thinking of buying in Donegal, but then we came through Virginia and saw some really lovely properties there, and that was that,” Denise recalls. “We also loved that it wasn’t too far from the airport - we would tend to see family in London and Kent, so that was a bonus for us.”

German-born Rolf and Denise relocated from the UK to Cavan in February, yet their plans to settle in and meet the locals took a dramatic turn.

“I’d just found a Zumba class I like and was delighted, and then it got shut,” recalls Denise.

Fintan’s wife Kathryn realised that the pair were struggling to meet new people in the area during lockdown. “They’re lovely, sociable people, but they were stuck,” she recalls. “We kept in touch with them, so we invited them around for Christmas, to make a night of it.”

“The invite from Fintan and Kathryn was wonderful,” notes Denise. “It was certainly way above the call of duty.

“Our typical Christmas is very quiet, where we batten down the hatches, and wouldn’t go for the big dinner,” Kathryn adds. “We’re setting the bar high this year though - we’re getting the Richard Corrigan [Christmas dinner] hamper.”

“I’ve never had strangers in my house for Christmas, but we kept in touch with Rolf and Denise after the house sale,” Kathryn laughs. “I wouldn’t have asked them if I didn’t truly enjoy their company - I’m not that altruistic!”

‘It’s my first Christmas volunteering on a helpline’

Dubliner Colene Faulkner started training with the Dublin Rape Crisis Centre earlier this year, and took her first calls on the helpline as a volunteer over the summer.

“If this was something that happened to my mother or sister, I’d like to know that someone is there to support them,” Faulker says. “It can be hard on the line, hearing people being sad and upset, but in the long run, you know you’re helping people simply by being there to answer the phone.”

When the organisation was looking for volunteers to cover Christmas shifts, Faulkner immediately put herself forward.

“I’ve no issue at all volunteering on the line over Christmas,” she says. “Christmas is the one time most people get to be with their families, but not everyone has that.

“You never know what the calls will be like, but Christmas will just be like another day. Last year, I think the centre took 67 calls over Christmas. It just goes to show, people will still want to talk.

“When someone rings the line, it means they’re able to talk about their experience, or they’re trying to,” Faulkner adds. “You being on the line is possibly helping someone out of a really tough spot, which can only be a good thing.”

The Dublin Rape Crisis Centre’s National 24-Hour helpline, supporting anyone who has been affected by sexual violence, is 1800 778888. More information can be found at drcc.ie.

Beverley East is pulling out all the stops for Christmas in her south Dublin home. “There will be gin, I have my smoked salmon, and I’ll have my few treats,” she enthuses. “I’ll make a turkey, ham and stuffing, and I’ve bought myself two books that I’m not to open until Christmas Day.”

After her husband died in 2016, Beverley has spent ensuing Christmases with one of her two daughters, in either Berlin or New Zealand.

“Years ago, we’d have 10-12 people around for dinner, and visit lots of people on St Stephen’s Day,” she recalls.

“Normally, I love travelling, but going through the airport at Christmas, with masks and crowds and having to avoid people - there would be no pleasure in that,” Beverley explains.

“Once I decided to be on my own, I thought, ‘I’ll really enjoy it’,” she adds. “I’ve had invitations from friends, but I’d probably feel more lonely going to another crowd. In fact, I’ve realised how lucky I am that I’m happy to be on my own,”

Does she worry that she might find herself in a lonely moment on the day itself? “I’ve thought about that, and maybe there will be a time where I remember all those Christmases that came before, but I don’t dwell on them. When your children are growing up, they’re your primary worry on Christmas Day - this year, I feel like I’ll get to do what I want to do.”

‘After spending Christmas homeless, this is our first year in a family home’

Anna* moved into her home in May, after being homeless for two years and three months. She now lives in Finglas with her partner James* and two children, aged 4 and 2. Last Christmas was a very different prospect for the family. “We had been living in hotels, and then were in a family hub this time last year,” she says. “We couldn’t have a proper Christmas. We had nowhere to put presents from Santa - I wasn’t going to trust the neighbour with them in case she ran off with them.

“I remember saying to my daughter, ‘let’s put up some lights’ and Santy will find you,” Anna recalls. “She was worried he wouldn’t find his way into the room. We’d walk by all the houses and she’d ask, ‘Mammy, when are we going to get to put up a tree in our house?’ It wouldn’t be a Christmas I’d wish on anyone. I felt like I’d failed as a mother.”

Finally, the family received keys to their own house. “I actually cried,” Anna admits. “The kids ran through the rooms with smiles on their faces. It’s moments like that you’ll remember for a long time.”

Anna is thrilled about planning a big family Christmas.

“Our tree has been up since November 2nd, and it might stay up until next year,” she smiles. “James was more excited about the tree than me - he was like a small child at Christmas getting exactly the present he wanted.

“We already have the day planned out,” Anna adds. “We’ll do a full dinner, and enjoy a couple of drinks. It’s nice to be able to live by your own rules.

“Coronavirus won’t get in the way of Christmas this year,” Anna vows. “We went a bit extra this year, but my kids deserve it. It makes up for the last few years, and everything that they lost.”

* Names have been changed.

Simon Community has launched 12 Challenges Of Christmas to combat 2020’s fundraising shortfall, and to help families like Anna’s. For more information, or to make a donation, visit Dubsimon.ie.

Kevin Murphy is no stranger to the LauraLynn hospice - he has been involved to some extent with the charity since 1993, when it was the Children’s Sunshine home. However, the volunteer who usually takes on the role of Santa is recovering from illness, meaning that Murphy now has to step into the breach.

He will spend Christmas Day visiting children in the hospice, and the residents of LauraLynn’s adult disability unit, Willow View.

“My own family are laughing hard at the prospect [of me being Santa],” Murphy smiles. “But I’ve seen enough people do Santa by now, so it’s going to be fantastic. Of course I’m a little apprehensive - you want to make it as real as you can.”

Murphy knows that as soon as he gets into character, any nerves will effectively evaporate.

“It’s the biggest role of the day and it’s absolutely huge for the kids, and to just see the look in their eyes,” Murphy adds. “I’ve seen that look when kids have met Santa before, and to be on the other side of that beard is going to be magical.

“It sounds like I’m doing it for myself, which in a way I am,” Murphy laughs. “I get a huge amount out of it.”