‘This is my actual Dad, Ross: a kind of fat rugby has-been’

Ross O'Carroll-Kelly: It’s like Honor’s had some kind of, I don’t know, personality transplant? 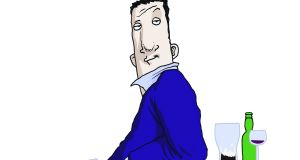 Honor reminds me of one of those shop girls who can chat away happily to the girl working at the next till while at the same time acting like a complete focker to actual customers.

It’s weird. It’s like Honor’s had some kind of, I don’t know, personality transplant? She’s smiling, for storters. And I literally haven’t seen that happen since Jennifer Lawrence snotted herself on the red corpet at the Oscars three years ago.

“Now,” she goes, staring into the camera, “a jumper dress is one of my – oh my God – favourite things to wear in the autumn? And this one I’m going to show you is from Joseph and it’s cashmere mix, which means it’s super, super warm. Literally, there is nothing not to love about this dress!”

I end up having to laugh. I’m actually in awe of her, even though I haven’t a clue what she’s talking about or why anyone would be interested in hearing it.

This is while the camera is still rolling.

I’m there, “I’m just taking an interest, Honor. I can’t tell you how proud I am that you’re an actual influencer, even though I’m not 100 per cent sure what it even means.”

She just sighs – like she’s bored with me – then she looks into the camera again. She goes, “Thank you all for the amazing, amazing response to my Transitioning Your Wardrobe from Summer to Autumn video. It has 77,000 likes and counting, so thank you so, so much for that!”

It’s amazing how she can turn the chorm on and off. She reminds me of one of those shop girls who can chat away happily to the girl working at the next till while at the same time acting like a complete focker to actual customers. It’s a gift, is what I’m saying.

“Today,” she goes, “I’m going to be showing you a pair of boots, which are pretty much my life at the moment – like, literally? – and I’m also going to be doing a Zara haul and a Luisaviaroma unboxing, which I’m – oh my God – so, so excited about! But first I want to introduce you to someone…”

Suddenly, without warning, she turns the camera around on the tripod so that it’s pointing at me.

“This is my actual dad!” she goes. “His name is Ross and I think the best way to describe him is that he’s a kind of fat rugby has-been!”

“I prefer rugby could-have-been,” I go, correcting her.

I’m suddenly like a jelly, being put on the spot like this. I’m like, “Er, yeah, no, just how – I suppose – proud of you I am? It’s lovely to see some of my qualities coming out in you.”

She actually laughs. “Oh my God!” she goes. “And what qualities would they be?”

I’m there, “Er, the whole fashion influencer thing? Bear in mind, I was the first person in Ireland to wear Dubarry Docksiders with beige chinos. I think that’s generally accepted.”

She points the camera at my feet.

I’m like, “Hey, it’s a classic look, Honor. You don’t fock around with a classic look. That’d be basically my message to your 400,000 followers.”

“Okay, describe for us then why you think this look is in any way attractive.”

“Well, basically, it’s a casual look but at the same time it’s, like, dressy? As in, you could wear it if you were meeting the goys for a few quiet scoops in, for instance, Kielys of Donnybrook. But then if you decide to kick on – maybe hit a club or something – there’s no need to go home and change, because you’re basically dressed for that, too.”

Honor turns the camera back around. “The words of my dad – who’s a sort of John Galliano of the middle-aged jock world.”

That doesn’t sound like a compliment, so I decide I’m not going to stand here and be possibly insulted. So I leave Honor to it. I tip downstairs and watch a couple of episodes of Judge Judy before Sorcha arrives home with the triplets.

“I know! Oh my God, I am so, so proud of her! Especially when I think where she got her actual love of clothes from!”

“Er, hordly? She got it from me obviously. She spent practically her entire childhood in my boutique in the Powerscourt Townhouse Centre. She’s been immersed in fashion all her life. Why would you think it was you, Ross?”

“Yeah, you’ve been wearing exactly the same clothes since you were, like, 16.”

“Hey, if it’s not broke, don’t fix it. I actually just described it on her vlog as a classic look, although I wish I’d used the phrase ‘anytime look’ now. I’m kicking myself here.”

Sorcha seems definitely put out by this news. She’s like, “You were on Honor’s vlog?”

I’m like, “Yeah, no, she just wanted me to explain to her followers the success of this look that I – and this is possibly a made-up word but – pioneered?”

Sorcha’s spitting nails. She goes, “Well, the only reason she hasn’t asked me is because I haven’t crowded her. I’m giving her space. But I know in time she’s going to come to me looking for advice, which I’ll be happy to give her – as someone who actually worked in the fashion industry and not someone who’s worn the same thing every day since 1996.”

I don’t get a chance to defend myself because Honor suddenly steps into the kitchen. She’s staring at her phone in just, like, disbelief.

She’s there, “You! Listen to these comments. ‘Your dad is so cool!’ ‘Your dad is hilarious!’ ‘I wish my dad was more like your dad.’”

It’s definitely a boost for the old confidence. I’m there, “People do genuinely love me, Honor.”

She goes, “I only put the video up, like, an hour ago and I’ve got, like, two thousand new subscribers. That’s it – from now on, you’re going to have to be in every video!”