‘There’s something wrong with the cat. I think she’s got dementia’

Hilary Fannin: It began when she said she expected to go to Gwyneth Paltrow’s wedding 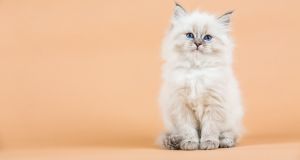 My son wants to put the cat in a home, which augurs terrifically well for my future.

The cat is having intimacy issues. She had a difficult kittenhood; I suspect she may have been weaned too early, though I don’t know the details of her infancy. Like many things in my life, she’s second-hand.

She’d been living with a distant acquaintance of my niece. Then, due to this person’s landlord having a no-pet policy, the cat washed up, mewling and spitting, in my sister’s kitchen. As my sister already had, and unfortunately still has, a truly awful cat called Squeak (a biter, with one-and-a-half ears and a personality disorder), it was mooted that the ratty new arrival quaking under the fridge would be happier with me. If I’d been her, I’ve had taken my chances with my sister and her psychotic moggie.

I’d always seen myself as a dog person (not that I had one of those either), as there’s something straightforward about the dog/human dynamic that you don’t get with felines.

A dog will love you with reckless abandon as long as you feed it. Other than that, you just have to pack its excrement into poo bags and remember to give it a name it has some chance of recognising, preferably something like Rex or Spot rather than the current trend for complicatedly human monikers such as Mary-Ann or Bartholomew or, as I heard on the beach the other day, Magnus.

Where was I? Yes, without a whole heap of enthusiasm from either party, the cat moved in and, over the past decade-and-a-half, we’ve come to an accommodation. I don’t attempt to elicit any affection from her and, in return, she’s stopped leaving dead things on the step for me to tread on, barefooted, when I’m lashing out the door in my fetching dressing gown to put out the bin.

Recently, however, there’s been a change in her behaviour which I’m finding unsettling.

It started when she told me she was expecting an invitation to Gwyneth Paltrow’s wedding to the boy they call Brad.

Ever since, she’s taken to purring loudly and rolling around in a state of amorous disarray on abandoned winter jumpers. Confused by the weather, she stands just outside the open door looking at the rain/hail/sun/sleet before rushing back in again, crossing her knees and getting on with waiting for the postman. Then, as if hearing a secret call, she rushes out again, into the dewy morning like a runaway bride, all high-tailed giddiness.

“There’s something wrong with the cat,” my son said. “I think she’s got dementia. Maybe you should put her in a home.” (An edifying conversation, which augurs terrifically well for my future.)

She never had kittens; she’d been spayed when we got her. It occurred to me that, in her virginal dotage, she might be rethinking her approach to intimacy. I’ve spotted her out of my bedroom window, frolicking around among the wilting daffodils with a debonair tom, newly arrived in the ’hood.

With the late arrival of spring, I was under the sink looking for slug pellets, when she tottered into the kitchen eating olives and drinking Martini.

“I’ve been in relationships that were riddled with intimacy issues,” she said, to my great surprise, largely because she was employing an accent that sounded distinctly Californian. “Now, for the first time, I feel I’m in an adult relationship that is sometimes uncomfortable because he sort of demands a certain level of intimacy and communication that I haven’t been held to before.”

“I beg your pardon,” I said to my normally taciturn pet.

“Yes, I feared intimacy and communication,” she wailed, throwing herself in a tangled heap over my newly rediscovered gardening gloves.

“Are you quoting Gwyneth Paltrow on her upcoming nuptials again?” I asked her. “You know it’s in all the papers that the marriage has already happened, under a veil of secrecy?”

“Nope. GP tied the knot without you.”

“What if she did?” spat the cat. “Regardless, Gwyneth speaks for all of us older pussies about to embark on love’s gruelling journey. All of us withered kitties, mounting that worn plastic pony on life’s rusting merry-go-round, can learn a thing or two from Gwyn when it comes to affairs of the heart.”

Well well, I realised, the old fur-ball was smitten. Between her and the gathering gastropods, it felt like spring must finally have sprung.

It’s just a shame about the fascinator she ordered from Harvey Nicks. Still, if she can’t wear it, she can probably eat it.