Melania Trump appears in public after ‘a little rough patch’ 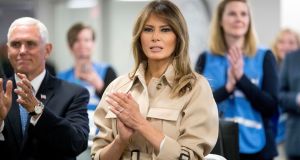 After spending nearly a month out of the public eye, Melania Trump emerged from the White House on Wednesday, putting an end to at least a few of the theories, some her husband has repeated to his 52 million Twitter followers, that blossomed like swampland ragweed during her time in seclusion.

Dressed in a trench coat and heels, the first lady accompanied US president Donald Trump to the headquarters of the Federal Emergency Management Agency (FEMA) to attend a briefing on the coming hurricane season. Sitting nearly still, Melania Trump cut a totemic figure alongside her husband as they sat around a conference table at the agency’s headquarters.

The president, reading from a notecard, introduced “our great first lady” to several members of his cabinet, vice-president Mike Pence and an assembled group of reporters. “She went through a little rough patch, but she’s doing great,” the president said, patting his wife on the hand.

“The people love you. Thank you, honey.” Melania Trump spent five days at Walter Reed National Military Medical Center in May to treat what her aides called a benign kidney condition, and had not appeared in public since before entering the hospital.

On Twitter Wednesday morning, Donald Trump bitterly complained about the speculation by the public and some journalists about her absence. But in attacking what he said were several conspiracy theories the news media had generated about his wife’s absence, he ended up repeating the kind of unfounded rumours about his wife that would normally attract legal action from him and his notoriously litigious family.

The Fake News Media has been so unfair, and vicious, to my wife and our great First Lady, Melania. During her recovery from surgery they reported everything from near death, to facelift, to left the W.H. (and me) for N.Y. or Virginia, to abuse. All Fake, she is doing really well!

...Four reporters spotted Melania in the White House last week walking merrily along to a meeting. They never reported the sighting because it would hurt the sick narrative that she was living in a different part of the world, was really ill, or whatever. Fake News is really bad!

“The Fake News Media has been so unfair, and vicious, to my wife and our great first lady, Melania,” wrote the president, who has long reveled in conspiracy theories. “During her recovery from surgery they reported everything from near death, to facelift, to left the W.H. (and me) for N.Y. or Virginia, to abuse. All Fake, she is doing really well!”

By attacking journalists who have speculated or asked questions about his wife, the president put himself at odds with his own personal history of using his platform, and a number of his supporters, to target women and effectively amplify rumours about their health, appearance and personal relationships.

On the campaign trail, he repeatedly attacked Hillary Clinton, his Democratic opponent, suggesting that she was not “loyal” to her husband, former US president Bill Clinton; questioning her physical stamina for the job; and suggesting that she was mentally ill. Trump’s campaign also aired at least one TV ad that pointed to conspiracy theories about Clinton’s health.

And he later took aim at two female journalists, Megyn Kelly and Mika Brzezinski, describing them in pejorative terms. He said that he once saw Brzezinski at a gathering at his Florida estate “bleeding badly from a face-lift” and that she had a “low IQ.”

In Melania Trump’s case, the White House has insisted that she is entitled to the same privacy that would shield any other patient. She surfaced for the first time on Tuesday in a closed White House event, but was spotted around the White House last week. Apparently referring to this, the president said on Twitter that reporters had seen the first lady “merrily” strolling in the White House over the past week, but “never reported the sighting because it would hurt the sick narrative that she was living in a different part of the world, was really ill, or whatever. Fake News is really bad!”

But at least one reporter noted on Twitter that he had seen the first lady with her aides in the White House, and her office has said Melania Trump has taken several internal meetings during her recovery. With the White House declining to issue updates on the first lady’s recovery, the guesswork about her whereabouts and her health expanded beyond the news media: On Tuesday, as Melania Trump attended the event with Gold Star families, a contingent of observers on Twitter wondered whether the sparse footage captured of the event was indeed from that day.

Historians say no modern first lady has prized her privacy more than Melania Trump, but the timing of her departure from the public eye was abrupt and baffling. It came as she was ramping up her public appearances and in the midst of rolling out her official platform, “Be Best,” which will focus on children’s issues.

Melania Trump’s stay in the hospital was also shrouded in secrecy. In the hours after her procedure, aides wore scrubs around her but said the procedure had been successful and without complications. In any case, the first lady’s public re-emergence is tied to one of her interests. Stephanie Grisham, her communications director, said in an email that Melania Trump would be attending the hurricane briefing because “it is an issue that she cares very much about.”

Last year, the first lady and her husband travelled to Puerto Rico to visit families affected by hurricanes, serving them food and visiting relief centres. When asked about the first lady’s health, Grisham’s response was brief. “She feels great,” Grisham wrote, “doing well.” At the FEMA briefing, the first lady did not speak publicly, but listened, smiling at her husband and nodding as he spoke. As the event drew to a close, the president referred to his wife and Pence. “Speaking for Melania and Mike,” Donald Trump said, “we thank you all very much.” –New York Times

With Megxit a dimming memory, Kate Middleton ‘has a good lockdown’
4

Covid-19 summer: It hit me hard when I realised the holiday wasn’t going to happen
Real news has value SUBSCRIBE