Ross O’Carroll-Kelly: I’ve tried my best not to love my son any less since he storted wearing glasses

I have to remember to treat them all equally, even though one of them is clearly never going to play rugby 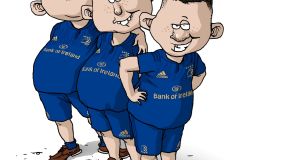 “I’ve got the three little goys lined up, each one standing a little bit in front of the next – we’re talking Brian, then Johnny, then Leo – and I’m showing them how to basically pass the ball.”

In all fairness to me, I’ve tried my best not to love my son any less since he storted wearing glasses – but, God knows, the kid is making it very, very hord for me.

Yeah, no, I’m in the back gorden with him and his two brothers and I’m doing what I was put on this earth to do, which is obviously teach. I’ve got the three little goys lined up, each one standing a little bit in front of the next – we’re talking Brian, then Johnny, then Leo – and I’m showing them how to basically pass the ball.

I’m going, “Remember, goys, your left hand is just for steadying the ball. Your right hand is going to do all the work. Now, we’re going to be passing the ball long, so you’re going to need to put some spin on the old shaved coconut. When you release the ball, make sure you’re looking at the player you’re passing it to. And don’t forget to use your entire torso when you’re throwing it. Will we try it?”

I laugh. Can’t help it. It’s a cracking line. But at the same time I have to remember to treat them all equally, even though one of them is clearly never going to play Leinster Schools Senior Cup rugby due to being basically half-blind.

What are you all laughing at?

“Johnny,” I go, “don’t be mean to your brother. And, Leo, just do your best, okay? Try to forget that you’re wearing those ridiculous things – hord as that may be. Okay, here we go.”

I offload the ball to Brian, who catches it perfectly and then, in one fluid movement, turns and passes it to Johnny, who takes it into his chest, then looks over his shoulder for Leo. He throws the ball – I would call it a textbook pass, being obviously biased – and Leo puts his hands out to receive it. Except he puts his hands out a split-second too late and the ball ends up hitting him full in the face, sending his famous glasses flying.

“Should have gone to Specsavers!” Brian shouts and I somehow resist the temptation to high-five him.

Suddenly, Honor sticks her head out of her bedroom window. She’s like, “What are you all laughing at?”

I pick Leo’s glasses up off the ground and I stick them back on his ears.

I’m there, “Honor, will do you me a favour? Will you bring me down that book I bought that time?”

I actually laugh. I’m there, “Er, the only book I’ve ever bought? Brian O’Driscoll’s autobiography. It’s on my bedside locker.”

Sixty seconds later, she appears in the gorden, carrying the thing – my literally Bible. It’s got, like, hundreds of post-it notes sticking out of the pages, basically morking passages that I’d ask Him about if my fantasy dinner porty ever came to pass – just me and Him in Nando’s in Dundrum, since you’re asking.

Anyway, I hand the book to Leo and – as tactfully as I possibly can – I go, “Leo, I don’t think that playing rugby is going to be your actual thing. I think you might end up writing about the game, like the great Gerry Thornley, or Gavin Cummiskey, who you heard call me ‘Legend’ in the Five Goys in the Frascati Shopping Centre seven weeks ago.”

I sit him down on the bench and I put the book in his hands. He stares at it with his big – literally? – glasses eyes. Honor, who’s very protective of her brothers, goes, “That’s not fair – stopping him from playing just because he has glasses.”

I’m like, “This is what all the top coaches have to do, Honor – in other words, make the hord calls.”

I look at Leo, engrossed in the book, except I notice that he’s holding it upside-down. The poor kid, I think. I wonder would we be better off just driving him up to Stepaside and releasing him into the Dublin Mountains.

I’m there, “Okay, Brian and Johnny, we’re going to work now on an old favourite of mine now called the Switch Pass. Basically, the Switch Pass is used to suddenly change the direction of the attack, thereby confusing the opposition and creating space for the ball carrier.”

At the same time, I can hear Honor talking to Leo. She’s going, “Are you just going to sit there and let them tell you that you can’t play?”

I’m there, “This is the move I showed you this morning in my Rugby Tactics Book. The key to it is the accuracy of the passes. Each one needs to be played at the right height, with the right speed and the right amount of weight behind it. Otherwise, the receiver is going to have to check his run or – worse – he’s going to drop the ball. Let’s give it a go. Johnny, I’m going to pass it to you. Brian, you’re going to switch the angle to attack. Okay, let’s do this basic thing!”

Again, I can hear Honor going, “Leo, give me that book. Are you going to let them dump you on the sideline like this? Are you going to sit there reading an upside-down book while your brothers play rugby? Or are you going to show them that you can play too, despite your profound visual disability?”

I’m there, “Okay, here we go,” and I throw the ball to Johnny, who receives it, then takes a couple of steps and turns his back on the imaginary opposition defence. Brian makes his run to change the direction of the play. And that’s when, out of nowhere, Leo comes chorging in Johnny’s direction. He hits him around the waist with the force of a rhinoceros. The air leaves Johnny’s lungs and suddenly Leo is driving his brother backwards until he slams him into the gorden fence, demolishing it in the process.

I’m just standing there in total awe. I look at Leo, his glasses all fogged up with the effort, and I wonder what kind of rugby coach I’m going to make if I couldn’t see what is suddenly obvious to me – that poor, blind Leo O’Carroll-Kelly is going to be my schools rugby stor.