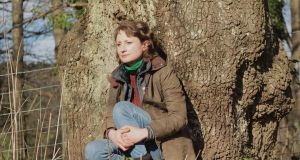 Melanie Wrynn knows horses, and is beginning to learn about trees. When the horse trainer and her husband Neil moved to a 21-acre farm near Newcastle in Co Wicklow just over a year ago, a friend gave them a gift of some beech saplings.

They planted the young trees with their papery copper leaves along the railings at the entrance to Ardeo Sport Horses, their business where customers arrive from all over the world to buy horses.

But behind those 125cm-tall beeches is a second line of smaller saplings. Those babies are expected to outgrow their bigger sister trees, because they got their roots in the soil of their permanent home at an earlier stage. If trees have feelings, then the younger ones will feel more grounded, they’ve been told. Melanie is fascinated to see how that theory will unfold.

There was a fateful moment when there was a small article put in the Farmers Journal which ended with something like: ‘Free trees: call this number’

Imogen Rabone is the tree whisperer who is educating the Wrynns as part of a plan to plant 12,000 trees on their small hilly home, which rises up a low Wicklow hill off the N11. Rabone (37) is the woman behind Trees on the Land, a project she started a decade ago to encourage landowners to plant native Irish trees by providing the trees, the expertise and often the labour to plant them.

After 10 years, her project has helped along the planting of more than one million trees across the island of Ireland.

Now Rabone is partnering with Self Help Africa in its ambitious One Million Trees project, a fundraiser aiming to plant 100,000 trees in Ireland and 900,000 in Kenya, Ethiopia, Malawi, Uganda, Burkina Faso and Zambia where the Irish charity is working. For every tree planted in Irish communities, the charity will plant 10 in African countries.

“While no-one can do everything to help combat climate change,” Ray Jordan, chief executive of Self Help Africa said at the launch of the project last month, “everybody can do something.” Those 900,000 trees will help to remove carbon from the air but “also provide an important source of food, income, shade and shelter for rural poor households”, Jordan said.

As businesses and individuals look to trees to offset carbon, it’s all very of the moment, but Rabone graduated from Trinity College Dublin with a degree in philosophy in 2010 and “the notion of planting trees”.

There was, she says, “a trend for only planting monocultures of conifers. I felt there was room for another model. There were thousands of landowners out there who wanted just a few trees, or to plant hedgerows and they needed support and advice.”

Sites, like the one in Newcastle where the Wrynns work and live, are perfect.

A great-aunt bought the 21-acre tillage farm in the 1950s, and it was passed on when she died. The couple bought out the rest of the family and, with the help of funding under the EU’s Leader programme for rural development, built a centre where buyers can come and try out their horses, and a house where the couple live with their three young children.

There were four acres of brambles to be cleared, and a lower field where sheep had grazed that gave them a surprisingly biodiverse hay crop in their first summer.

“Imogen has really educated us,” Melanie says. “She was part of the process when we started to look at our site.”

From a windy hill with a view of the sea in Wicklow, the further away sister trees will be in one of Self Help Africa’s projects to plant faidherbia trees in Malawi

One of the first things she spotted were the existing hedgerows, with their towering veteran beeches. The Wrynns weren’t an easy sell on the idea of giving over valuable space to trees. “My first impression was we were going to lose land,” Neil explains. “I thought, you can’t have all these hedgerows. I need grass to feed my horses.”

But Rabone designed the plan, running corridors of whitethorn, hazel and holly hedgerows along the grassy stretches above and between the paddocks, to improve the soil and drainage and biodiversity, interspersing limes and oaks every five metres for a hedgerow that would shelter animals from the wind whipping off the Irish sea.

“She made me aware of what I already knew,” Melanie explains over coffee after a walk around the smallholding. “When you put a horse out in a really nice old field which has beautiful hedgerows around it, they aren’t always eating the grass; they’re having a chew of a leaf, they’re browsing, and it’s really good for them.”

The horses aren’t the only animals that love the trees. They have rabbits, birds, badgers and foxes. A herd of deer appeared out of the neighbouring conifer forest to eat the young broadleaf trees, but a deer fence has been built to keep them at bay.

Ardeo is one of almost 1,000 sites being planted under the scheme this year as part of the Self Help Africa project. Rabone started it a decade ago by contacting people she knew.

“There was a fateful moment when there was a small article put in the Farmers Journal which ended with something like: ‘Free trees: call this number’. That started a huge list of people who are interested.” Conversations over garden fences and farm gates meant a lot of the applications came in clusters. She lost count of the people who told her she was “completely crackers” if she thought she could get farmers to plant trees.

“Most farms can accommodate 10,000 trees without too much difficulty,” she says, “just not necessarily all in one place. The real key point is that on farmland where you fence lands and have boundaries and bits of scrap land, corners you can’t get tractors into, you can get quite a lot of trees without any impact on your farm payment. There are huge misconceptions, the idea that trees mean forestry, but you can have useful trees that are part of working farmland, or trees in hedgerows.”

She is not, she says, a tree hugger. “My intention is very practical, to make an impact in a small steps kind of way.” The project is not in competition with the Department of Agriculture grant scheme for native woodlands, but it does provide elements not covered by that scheme such as hedging, shelter belts and fruit trees, and it works with smaller sites. The native woodlands scheme is available for sites as small as 0.1 hectare, but in practice is only availed of by landowners with larger tracts of land.

Rabone’s philosophy degree has been a huge help in understand the many points of view and “many roads to Rome” around tree planting.

“Every landowner out there has a story and an understanding of their land, making the very broadest possible view of the massive diversity of ways trees can be planted.”

In Newcastle, the Wrynns have welcomed several business groups for tree planting days.

“Last December we had our first group, which was Earth’s Edge [an adventure travel company]. They were a great first group. They just went for it. We all got out. Everyone was exhausted but by the end of the day they had planted 1,000 trees.”

Andrew Byrne, a young employee at Ardeo, has a degree in forestry so he manages the planting days. He reckons the oldest beeches surrounding the smallholding are a century old. The ground underneath our boots is crunchy with beech nuts which help the soil. Many people have commented on how many earthworms they find when they dig.

From a windy hill with a view of the sea in Wicklow, the further away sister trees will be in one of Self Help Africa’s projects to plant faidherbia trees in Malawi. The tree is a key African agroforestry crop, thanks to its reverse leaf system. It sheds its leaves in the wet season and they fertilise soil. In the dry season it goes into leaf, providing a fodder crop for animals. Faidherbia agroforests can double or triple maize yields, according to experts.

Agroforestry, as the Wrynns are learning, or threading trees into working farms, is a win-win that will only grow stronger in the years ahead.

Landowners interested in tree packs to be planted next year can go to treesontheland.com. Every €5 donated to Self Help Africa will help plant one native Irish tree and 10 trees in African countries,  selfhelpafrica.org/onemilliontrees