Michael Darragh Macauley, hero of Dublin’s All-Ireland victory, credits the influence of his father and teachers – and his obsessive weight-watching – with his success on the pitch 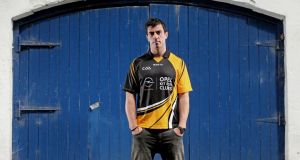 Michael Darragh Macauley. “I’m intense on the field and very relaxed off it.” Photograph: James Crombie/Inpho 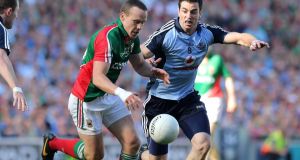 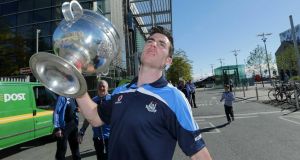 It is true that you could feel Croke Park shaking last Sunday. “More so in the semi-final. And there was the same feeling in 2011.Those last-minute thrillers. And against Mayo on Sunday. You can feel it shaking, even on the pitch.”

This is Michael Darragh Macauley, hero of the Dublin victors in the All-Ireland football final. This weekend, with the hurling final tomorrow, the country is wondering how many more last-minute thrillers it can take. The legends are pouring out of Croke Park.

Macauley didn’t score in last Sunday’s final; he has yet to score in a final. Nor did he play on with a broken foot. “It’s more bruising,” he says. “That’s just one of those stories that got legs.”

He isn’t that tall. “Six foot three,” he says. “On a good day.” He is drinking green tea, which he tried for the first time only a couple of weeks ago. “I’ve never had a cup of normal tea, or a cup of coffee, in my life.”

He helps me work the voice recorder on my phone. He helps a fellow student on crutches to retrieve something he had dropped on the floor. He is aware. At the end of the interview, which took place at a coffee bar on the Maynooth campus where he is studying to be a teacher, he clears the table.

This is another thing that surprises people about him, he says. “I’m intense on the field and very relaxed off it.” Later he says, “I’ve always been good-natured.” Even I know that there are opponents who might think this last part untrue. Macauley is what is called, in GAA terms, contact-friendly.

He’s 27, but he was a late starter, troubled by injuries, and had his first season only in 2010. Will he stop playing now? “I don’t know. The age profile gets lower all the time. The oldest person on our team, Denis Bastick, is 31.”

I’m having a chocolate, cranberry and Rice Krispie bar. Macauley is having . . . nothing. He has to watch his weight. “Everyone’s striving for perfection,” he says. He and his teammates are, like supermodels and jockeys, “obsessed by the weight”.

It’s not exactly Roy of the Rovers, is it?

When Macauley’s father, also Michael, was on the waiting list for a lung transplant, he had to lose weight, and so did Macauley, and so did his Aunt Anna (it is unclear who decided this about her), his father’s sister, who came in every day.

Macauley put a chart up on the fridge with their starting weights. He was doing the shopping, so he made sure he never bought biscuits. But Aunt Anna was, allegedly, bringing the biscuits in. Macauley would check her shopping bags and also find biscuits “hidden about the place”. Macauley is tough. His father lost 12kg.

In fact, Macauley seems to weigh a lot of people he’s fond of. “The day we moved into the house I weighed all my housemates.” It’s as if he wants to put everyone in training, for their own good.

We talk about having three names – personally, I blame Jimmy Barry-Murphy – but Macauley won’t be drawn. His mother called him Michael Darragh, and so did his father, and so do all his relatives.

It is the spelling of his surname that is more of an issue. His father, a GP practising in Ballyroan, in Rathfarnham in Co Dublin, but originally from Lettermacaward, in Co Donegal, once called Croke Park to make sure that Macauley was spelled correctly in team listings. Wherever you turn in Macauley’s career, his father’s enthusiasm is bubbling beneath it.

Yet, growing up, his was not a sporting household. Macauley has an elder sister, Margaret, and an elder brother, Joe. “I was the little baba of the family.” His father was “an avid watcher and supporter”. Macauley’s brother Joe played basketball.

But it was really at Ballyroan Boys’ National School that Macauley was drawn to sport, through the influence of teachers there. Those teachers are one of the reasons he is studying to be a teacher now himself. “I’d love to be as influential on someone else’s life as they were on me.” These days the local children send him good-luck cards.

Mother’s death
The central event of his childhood was the death from lung cancer of his mother, Rosaleen, who was from Strandhill, in Co Sligo. “Mam died when I was 12. It hit me as hard as can be.”

Over the last two years of her life she spent long periods in intensive care. “I was aware of it. But there was so much going on for you when you are 12.”

All of this is said with great openness and calm. One of things that is not surprising about Macauley is his fearlessness. Appearing on the live RTÉ Two sports show Second Captains Live the night before this interview, he had seemed entirely self-possessed. You feel nothing can shake him, even as the stadium trembles.

One repercussion, as he puts it, of his mother’s death was that he was sent to boarding school. He was 13. “And you know at 13 everything is kicking in.”

He went, as a boarder, to the heart of rugby culture, Blackrock College. That must make him the most unlikely Blackrock boy ever, I say. “I get that a lot,” Macauley says.

“It was a serious culture shock. It was who you knew, completely. You were completely defined by your role on the rugby field. I just never settled into boarding school. I wasn’t coming out of the ghetto, but it just didn’t suit me. But in fairness most people are happy there.”

His GAA teammate Cian O’Sullivan also went to Blackrock. “ Last time we won we were invited out there to talk, and I tried to say that rugby isn’t everything, you know . . . I was getting evil eyes from some teachers in the back row.”

All of his mates from his primary school in Ballyroan had gone on to the local secondary school, Coláiste Éanna, “and it had a big basketball team. I begged and pleaded to go there, trying to sway my dad and my sister, but it didn’t work.”

His father,who sounds great, never gave in. “Blackrock is really expensive, and he used to see the money going out of his bank account and say, ‘It has to be a great education.’ I beg to differ.”

Seven years ago his father was diagnosed with fibrosis of the lungs. “It was a big boost for him when he learned he was on the transplant list.” It was at this point that Macauley started writing him diet sheets and giving him exercises. For years it had been just him and his father in the house. Was that a bachelor paradise? “I wouldn’t say that.”

Three times his father was on the verge of receiving a lung transplant. “With my mum I was told at an early stage that she wouldn’t make it.” Was it helpful to be told that, even though he was so young at the time? “Yes,” he says.

“But with the transplant there’s a strong light at the end of the tunnel, if you just ride the train out. I thought our problems were over.”

Macauley slept many nights on the floor of the Mater heart-and-lung unit, waiting for his father’s transplant to come through.

During his father’s illness, he says, “He was nearly more obsessed with my career than he was with his own health. His patients will tell you that. They got a running commentary on my life, and maybe a check-up if they were lucky.”

In a strange way, despite all the focus and the discipline to train “all the time”, Macauley doesn’t seem like a footballer. “Most of the lads I hang around with, not a lot of them play football at all. They’ve been brought in by me playing.”

He has good support from his sister and his family. He’s been with his girlfriend, Rosie Cooney, for a year.

Lateness an advantage
In some ways his late entry into football may have been an advantage. “I had a couple of summers in America, went to Thailand. The other lads who are so good, they’ve been fast-tracked since they were young. They’d be lucky to get two weeks in Spain.”

He envies his friends who are travelling now. “That’s one of the toughest things about football. We left college in 2008, the start of the recession, so they went away immediately. Some of them are beginning to crawl home.”

Losing his parents, he thinks, has given him a sense of perspective and a desire to “just try and get on with life. It is tough. Part of me does wonder what I would be like if Mum was around. Part of me does ponder how I would have turned out.”

He never seems to have doubted the significance of football, even when – or particularly when – his father was dying. “We didn’t think he’d make it out of 2011. I had a gut feeling. I knew I had to win in 2011, and I did.”

In fact, his father did not die until November 2012. In January Macauley was glad to throw himself into his teacher training, and his football training. “I go up and visit the grave before matches now, to get a few words of wisdom.”