The grandmother who runs a sex shop: ‘Prudish Ireland is dead and gone’

Jacinta ‘Cindy’ Walshe owns Waterford’s only adult store, catering to people from all walks of life . . . and all ages 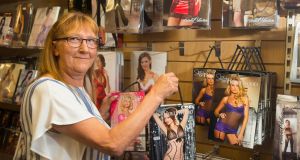 Jacinta ‘Cindy’ Walshe at Pillow Talk: “I offer people respect, a laugh, humanity . . . and devices which help produce one hell of an orgasm.” Photograph: Patrick Browne

“Dull old day out there, I’d say the weather has broken,” remarks the sixtysomething-year-old local browsing through the shelves of adult DVDs.

“Oh, it has surely,” answers Jacinta ‘Cindy’ Walshe nonchalantly before asking if he needs any help. “I’m grand,” he says, as he continues his search.

You’d know instantly if someone was nervous

‘Pillow Talk’ on Waterfords’ O’Connell Street might sell everything from blow-up dolls to vibrators, bondage masks to lingerie and adult magazines to lubricants – but it has, in many ways, all the charm of a local shop.

And that’s down to the boss here, the grandmother with the smile, wit and life experience to make her customers feel at home as soon as they push open the door and cross the threshold.

Jacinta Walshe, everyone calls her Cindy, stumbled into this business five years ago and she says it was the best move she ever made.

“I had so many jobs over the years. I worked in a meat factory, a food factory, as a waitress and I managed a bar and restaurant out on the Tramore road. I even did the bouncy castles,” she explains behind the counter of her shop.

“And then a few years ago I broke my wrist, fell off a chair, and it took two years to heal. It drove me mad, I couldn’t work and I wasn’t sure what I was going to do. And then one day my son Jimmy told me that the fella who owned this place was thinking of selling up and moving on. I thought about it and decided I might give it a go. I’m sure some people thought I was mad but what did I care? It was work.”

She’d visited an adult shop or two over the years but “I wouldn’t have been in them every weekend or anything”, she laughs.

The young lads are so casual. It’s like they’re buying a new shirt and trousers to go to a 21st

Hers is now the only adult store in Waterford and she’s ably assisted by her nieces, who call in to cover some shifts and dress the window display on occasion.

“It’s an incredible business, a fantastic job and I love it. Opening the door is a big step for people. You’d know instantly if someone was nervous. How you greet them is so important. If you make them feel at ease that’s the greatest feeling in the world,” she explains.

Walshe admits, though, that some still associate the adult store business with being “sleazy” or “seedy”.

“Some still think we have a flashing red light over the door, that you have to knock before coming in. We’ve come on a long way from that time. When the shop opened first about 20 years ago there were people with placards on the street. Ireland is a much more open-minded and liberal place, thankfully. And people are, by and large, respectful when they come in. It’s very rarely that we have to reprimand anyone.”

As we chat, the customers filter in and out. Some just browsing, others more knowledgeable about what they want.

“We get people coming to us from as far away as Kilkenny and Cork, from Clonmel, Carrick-on-Suir, Dungarvan, and an awful lot from Wexford, Enniscorthy and New Ross,” says Walshe’s niece, who’s popped in to help out her aunt for the afternoon.

And the requests can be oh so varied, as Cindy Walshe tells me:

“You’d be amazed but I don’t judge anyone. We’d get a lot of transgender and cross-dressers coming into the store. Also, people coming for bondage gear to attend fetish parties in Dublin. The young lads are so casual. It’s like they’re buying a new shirt and trousers to go to a 21st. And their girlfriends asking ‘you wouldn’t have any bigger whips by any chance?’. Then there are the swingers and the ones who occasionally go dogging. That’s happening in Waterford and all across the country. People turn up in their cars and have great sport. As I say, I don’t judge but what’s clear is that the prudish Ireland I grew up in is dead and gone.”

And how does she react when someone she knows walks in?

“I say ‘Well, how’s it goin?’ and promise there won’t be a word to anyone. I’d say we’re more discreet here than the priests up in the confessional. Because people have to be comfortable passing you on the street and they’ll always come back when they know they can trust you,” says Walshe.

Couples in their 80s

She tells me of couples in their 80s who come in to buy products to pleasure the husband – “I think that’s actually lovely. They love each other so much that they come in together and it’ll often be the wife asking all the questions. And then she’s as thrilled as he is when they pick out something to bring home.”

Walshe is proud of the fact that she knows the products inside out. I pick up one called ‘The Womaniser’, which costs in the region of €200, and honestly can’t figure out what it does.

“Oh, that’s unreal, that is,” she exclaims. “It’s a suction device, a clitoris stimulator. You’d want to call the interior decorator to get the nail marks out of the ceiling after using that. It’s trojan.”

A lot of the people who come in here are lonely, confused, shy and lost

I blush. “Ah come on,” she admonishes, "we’ve come a long way from the ‘brace yourself Bridie I’m coming in’ days.”

The mother of two and grandmother of six has worked hard to turn her business into a success. The osteoporosis doesn’t help. And it clearly isn’t the easiest retail sector to be in as she’s somewhat hand-tied by her location on the edge of the city and advertising restrictions. But she believes her store is bringing joy and pleasure to individuals and couples:

“A lot of the people who come in here are lonely, confused, shy and lost. As one bachelor farmer said to me recently ,‘it can be very quiet on a Saturday night after a few pints’, so these products help them and who are they harming? No one.”

When it all becomes too much, Walshe switches off and plays with her grandchildren. Last weekend, she made them bows and arrows. And she’ll jump in the car with a niece and take to the highways and byways in full ‘Thelma and Louise’ mode when she fancies getting out of dodge.

“I am who I am and I love my job. I’ve always been open minded and liberal. I never swam with the tide if I thought it was the wrong thing to do. Inside these four walls I offer people respect, a laugh, humanity . . . and devices which help produce one hell of an orgasm. At the end of the day, that’s the best anyone can do.”