Dún Laoghaire social club is selling up after 130 years

One of the town’s longest-running social clubs is on the market for €1.45 million 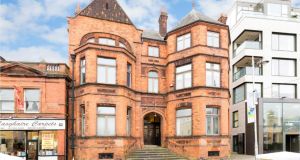 43 Upper George’s Street in Dún Laoghaire: one of the town’s oldest social clubs 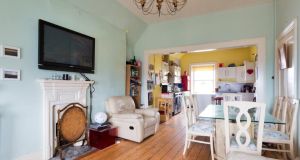 Caretaker’s accommodation at 43 Upper George’s Street in Dun Laoghaire: one of the town’s oldest social clubs

One of Dún Laoghaire’s longest-running purpose-built social clubs is selling up after 130 years at 43 Upper George’s Street.

The distinctive, large and imposing building – with “Kingstown Mens Christian Institute” in redbrick over its entrance – has been home to a social club since 1888 catering, initially, to the Protestant community.

Work on the building began around 1884 thanks to benefactor William McComas of The Grange, Monkstown who not only stumped up the £4,000 for its construction, but also left £10,000 (quite a sum in those days) in a trust to ensure the club could ride out any dips in its fortunes over the years. When complete, it was one of the first commercial buildings in the town to have indoor toilets.

The initial idea was to set up a club for young Protestant gentlemen from the country who moved to the area for their first jobs in what was then Kingstown. Many of these men found work in the Edward Lee & Co department store where Dunnes Stores now stands.

By providing them with a place to socialise, and study the Bible, the intention was to keep them on the straight-and-narrow, close to their faith and support their initial steps towards establishing themselves away from family and home.

Towards these ends, number 43 included two Bible reading rooms and a large gym on the ground floor, and two billiards rooms on the first floor. Snooker was, apparently, banned in the club back then as it was seen as a “working man’s game”. The caretaker’s accommodation is on the second floor while part of the attic has also been converted.

The club was attached to three Protestant churches in the locality: the Mariners’ Church on Haigh Terrace (now occupied by the National Maritime Museum); Christ Church on Park Road overlooking the People’s Park; and St Paul’s in Glenageary.

Membership reached about 300 at its height but dwindled during the 1970s – mainly due to the advancing age of members. So, rather than close, the club opened its doors to Catholics and women while adding a bar in 1977 close to where the now-permitted snooker was played. The addition of a bar also led to a name change – the club became Dún Laoghaire Christian Institute.

Views of the bay

Membership grew to more than 200 by the millennium – with a 70/30 split between the sexes. The bar beside the snooker room, where a pint of Guinness costs €4, proved too small for the club’s needs so another was installed in what was the gym where a music venue was also developed.

This addition – complete with a giant figure of Marilyn Monroe trying to keep her skirt down – proved a mainstay of the club through the Naughties. But, as surrounding buildings were converted from offices to apartments, there were complaints about noise and it was decided to close this part of the operation.

Early in this decade, membership began to drop off again even though annual subs typically cost about 85. There are currently 52 members – the youngest is 60, oldest 91 – and most are locals. However, high insurance costs and rates, plus the closure of the music venue, put the financial kibosh on the club over the past three years. The trust, which helped the club greatly down the years, apparently lost money on bank shares during the bust and couldn’t sustain it this time. So a sale of the premises became inevitable.

The listed building, which requires modernisation throughout, is accessed up a flight of granite steps at the front. Double bay windows light up the high-ceilinged spaces which have plenty of period detail but could never be considered as extravagant, ostentatious or adorned with excessive decoration – a touch of Protestant restraint, perhaps.

Extending to a whopping 650sq m ( 7,000sq ft) over five levels, the entrance is the most impressive – grand in scale and gracious in its detail. There are clear views over Scotsman’s Bay from the second floor and the building benefits from one car-parking space to the rear.

The club is staying open until the building is sold. Its club bar licence runs out in September but the fact that it existed for so long could be a consideration for a potential purchaser when it comes to deciding a future use for the building.

Another possibility is that the building could be converted, subject to planning permission, into residential use. A number of nearby commercial buildings have already been converted to apartments, such as Adelphi Manor where 19 apartments were built in a former five-storey office block. Last June, prices at Adelphi Manor were from €310,000 for one-beds, from €375,000 for two-beds and €900,000 for penthouses.

Interestingly, 10 of the 22 apartments at Adelphi Manor had already been reserved by buyers on an enquiry list, many of whom were downsizers from the local area, first-time buyers, and purchasers from abroad.

In May 2014, the McGrath Group also launched 25 apartments in a former 1970s office block at The Crofton on George’s Place in Dún Laoghaire. Meanwhile, the former period offices at Crofton Hall on Crofton Road – facing the town’s Dart station – are being re-purposed into 13 apartments.

Number 43 is for sale through joint agents Cushman & Wakefield and Sherry FitzGerald for €1.45 million. When the building is sold and club debts are cleared, any surplus will be paid to the local Church of Ireland as per the articles of the trust which established the club.

Sadly, it’s probably the last such club in the town still standing. Others, like the Working Man’s Club, have long since vanished.