Priests had relationships. Couples used contraception. People opted not to take it all too seriously 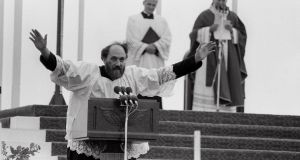 During the last papal visit I went to see the pope in Galway. I hadn’t intended to, but I was a bit drunk. Myself and a friend emerged from a pub in Ballinasloe to witness an eerie luminous convoy snaking through the town. It seemed like an adventure. So we stuck out our thumbs.

The man who picked us up was coming from Dublin, and although he seemed animated, he wanted us to keep him awake. He was exhausted from selling JP2 posters at the Dublin Mass for 50p each. Much to his astonishment, he had shifted 7,000 of them. He had celebrated by drinking a bottle of whiskey during his journey and was far more drunk than we were. Happily, our terrified yelps managed to keep him alert all the way to Ballybrit.

Once there, we positioned ourselves at the top of a slope looking down at the altar/stage, and like most of the people around us, we fell asleep. When we woke, the pope was already speaking. We had completely missed the warm-up act of Bishop Eamonn Casey and Fr Michael Cleary: whose appearance at the Young Peoples’ Mass was more appropriate than anyone knew at the time.

You may view this as disrespect or hypocrisy

I can’t remember much else about it, other than marvelling at the amount of people around me who managed to sleep through the whole thing. No doubt there were many there genuinely delighted to be in the presence of the pontiff, but there were others – like me – who turned up just so they could say they had; to have that story to tell.

You may view this as disrespect or hypocrisy. You may view Catholicism as a discreet and rigid set of structures to which one gives fealty or loses the right to be called Catholic. But in reality the Irish church was never like this. People at all levels bent the rules. Priests had relationships. Couples used contraception. People opted not to take it all too seriously. The only difference was that, back then, you kept quiet about it.

Over the next few months, you’ll hear a lot about how Ireland is such a different place now. But the secularisation of this country was due to far more than the sexual abuse scandals. It was happening anyway. We were better off, better educated, more confident: we had more room – and most importantly, the freedom – to consider and finally express our own beliefs. For some, this meant leaving the church behind altogether; for others this meant redefining the meaning of  ‘Irish Catholic’.

And unlike 1979, it is now openly à la carte. To be an Irish Catholic might mean you’re divorced or gay or you only go to Mass for funerals. It might mean you don’t really believe in God at all; but given that you’ve grown up being brought into churches, you still find them comforting.

That doesn’t mean they all agree with Rónán Mullen

Most importantly, you don’t feel the need to apologise for or explain this to anyone; certainly not any member of the hierarchy. They can’t tell you how to live your life. They can’t tell you what God means. Conservative stalwarts such as Rónán Mullen may make much of the fact that more than 75 per cent of people in Ireland still identify as Catholic: but that doesn’t mean they all agree with Rónán Mullen. Or that any of them agree with Rónán Mullen.