Passionate historian who was deeply affected by wartime upbringing

Obituary: Helga Robinson-Hammerstein was born in Germany on eve of second world war and went on to teach at TCD 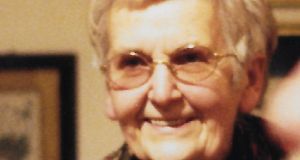 Leading early modern European historian Dr Helga Robinson-Hammerstein, who has died in her 80th year, inspired generations of students with what one graduate termed her own “wonder and enthusiasm” during a lifetime’s career at Trinity College Dublin.

Dr Robinson-Hammerstein was a distinguished scholar with extensive research and publications, particularly on the Reformation period, but she was also renowned for her pastoral care. Many former students attending her recent funeral agreed that she was like a “second mother” to each and every one during her time as college tutor.

She was born in Nassau/ Rheinland-Pfalz in Germany on the eve of the second World War and the conflict claimed the lives of her father, grandfather, several uncles and her aunt. Her mother Johanna, her grandmother and an aunt with a disability, survived to rear Helga and her two siblings, Waltraud and Walter. As Helga’s nephew Daniel Becker recalls, in April 1945 the small family retreated to a hilltop in vineyards above their town of Nassau for safety when the US army arrived.

Watching the long rows of military vehicles snaking into the town, Helga’s grandmother recalled that “this is the second time in my life” that this had occurred. And yet she and her daughters and granddaughters lacked the education to be able to talk to the soldiers or even run their own businesses.

“Our girls, they shall learn something, they shall have a better life than us,” her grandmother pledged. And so Helga and her sister were sent to grammar school, and to university, breaking with the family tradition of craftsmen and shopkeepers.

History became Helga’s early passion, framed by the many disturbing experiences of her early childhood during the war and her desire to understand how the Nazi regime had come to power and caused such devastation and death. She studied in Mainz and Marburg and was in London from 1964 when she chose Archbishop Adam Loftus, first provost of TCD, as the subject for her dissertation. In 1967, she travelled to Dublin for a fortnight’s research at TCD, but stayed longer and was offered a job by Prof TW Moody, head of the university’s history department, before she left.

It was, as her former student and colleague Dr Elizabethanne Boran has noted, an inspired choice as she combined an interest in early modern Irish history with a “boundless knowledge” of early modern European history, instilling in her students the fact that “one should never separate the two”. Her junior freshman course in the history of Europe from 1500 to 1700 “not only served to introduce Irish students to an unfamiliar topic, but it also introduced them to Helga”, Dr Boran recalled.

Her “list one” subject – the Reformation in Germany – became a highly popular special option choice for third- and fourth-year students.

She “never stood still” as a lecturer and researcher, developing courses, researching, organising exhibitions and writing such works as her seminal essay collection , The Transmission of Ideas in the Lutheran Reformation. Among the courses she developed was the history of European universities in the medieval and early modern period. Although known primarily as an early modernist, she taught a course on the Weimar republic which examined how anti-democratic forces undermined the German state up to its collapse in 1933.

She continued teaching when she became dean of graduate studies at TCD, and co-ordinated an M.Phil in Reformation and Enlightenment studies – the first one-year taught Masters of its kind which combined history through Dr Patrick Kelly, French history through Prof Jean Paul Pittion, philosophy with Dr David Berman and the expertise of Dr Charles Benson, late keeper of early printed books. The course was regarded as one of her finest achievements.

She served as a highly popular general secretary for the International Commission for the History of Universities from 1995 to 2005. Her frequent participation in radio and television discussions included a contribution to a five-part RTÉ series to mark the Confession of Augsburg in 1530.

Her commitment to her students, extending to ensuring everyone had their own mug during mid-seminar coffee breaks, was reflected also in devotion to her family back in Germany. She would regale her nephews and nieces, and their children, with mischievous and magical stories, often with an Irish background and sense of the absurd.

She continued to write about the Reformation after her retirement at the age of 69 and was particularly happy last year to witness its 500th anniversary. She and her husband, TCD medieval historian Dr Ian Robinson,were devoted to each other. They shared a passion for music – forming the Musica Sacra group which performed pieces from Johann Sebastian Bach – and listening to the Bach Cantata every Sunday. Helga Robinson-Hammerstein is survived by her husband, Ian, sister Waltraud, nephews Daniel and Peter and niece Ulrike, grand-nephews and grand-nieces. She was pre-deceased by her brother, Walter.