Sean Moncrieff: Entrepreneurs are a mix of Yoda and Nietzsche. Not politicians

There is a lesson here for all democracies. Trump said it himself: he wasn’t a politician 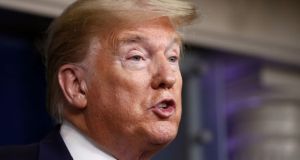 One of the many reasons the Trump presidency failed was because the American people voted in a man who hadn’t a bull’s notion how to do the job. Photograph: Alex Brandon/PA Wire

The last days of Donald Trump were like Shakespeare on social media: all bloviated objurgation (I’m being Shakespearean) with the crazy old king rattling around his empty castle, screaming in CAPITAL LETTERS at the few courtiers he had left. The Twitter mob chanted outside the gate, while he added to the list of all those who had betrayed him.

He wanted to hang on to power, of course, but I’m tempted to imagine that he was also stalked by fear: of becoming the one thing that has always horrified him, that disgusted his father, that propelled him over many decades. The fear of being a Loser.

Over the past four years, it’s been his absolute favourite insult, delivered with an almost boyish conviction that it’s the worst thing you can say about anyone, ever. Among dozens of others, he’s aimed it at hurricane victims, dead soldiers, former Scottish first minister Alex Salmond, Islamic State and Cher. To lose is the ultimate degradation, and of course compares unfavourably with himself: Trump is a winner; a man who clawed his way up the business and media trees, armed with nothing but wild ambition and $400 million of his father’s money.

But like much else in the United States, Trump didn’t invent this way of looking at the world: it is sewn into American cultural and political life. In the presidential race we just witnessed, it was a series of zero-sum games, state by state, with close to 50 per cent of voters left without a voice because they backed the wrong candidate. Losers.

But in a winner/loser culture, that’s what you get. The winners can invent the myths as to how they got to be so successful, as well as define what “winning” means; and all too often, that means economic success.

At its most winnery, it means being an entrepreneur: a word that only came into common English usage in the last few decades, (just like “winnery”) but carries with it all sorts of mythic possibilities. The entrepreneur is a risk-taker, a disrupter, a visionary, a creative. Entrepreneurs have all the fancy nouns. One of the largest areas of growth in entrepreneurship is thinking up new and awe-inspiring ways to describe entrepreneurs: an expanding bubble of self-pleasuring that is yet to explode.

Trump was an entrepreneur whose only skillset involved making deals. But wise governance requires far, far more than that

So vigorously are these ideas promoted that entrepreneurs can be viewed more as wizards than people who buy and sell stuff. A mixture of Yoda and Nietzsche, they literally make money: they will it into being.

Thus, it’s no surprise when ordinary folk might feel that these semi-divine beings should be given a crack at running nations; even if those ordinary folks, by the Trump metric, are losers themselves.

Let’s not be smug. The Michael-O’Leary-should-run-the-country trope gets a regular airing in Ireland; and many people have run for office here based on their “business experience”.

You can see the attraction: a straight-talking outsider rides into town and cuts a swathe through the bureaucracy with their six-gun of truth. They’re not scared to mix metaphors.

But this is apples and oranges territory. Or apples compared to brain surgery. The aim of business is fairly straightforward – to generate profit – while the governance of a democratic country is mind-bendingly complex. There are thousands of moving parts, each of which has to be considered and balanced against the others. It requires patience, pragmatism, diplomacy, cunning, empathy and a clear-eyed acceptance that progress will almost always be incremental. No one gets everything they want, and every step has to be cautious. The disruptive move can potentially ruin people’s lives.

There is a lesson here for all democracies. Trump said it himself: he wasn’t a politician. He was an entrepreneur whose only skillset involved making deals. But wise governance requires far, far more than that. One of the many reasons the Trump presidency failed was because the American people voted in a man who hadn’t a bull’s notion how to do the job.