Tanya Sweeney: Memories – good and bad – go wherever we do

After my mother died, a weekend spent clearing out my family home brought our family closer together 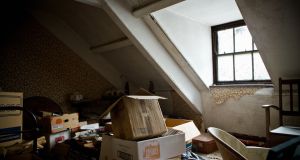 Amid the chintzy swan figurines and the souvenir plates from Mallorca we found stuff that made memories return like an avalanche. Photograph: Getty Images

I couldn’t be exactly described as a seat of wisdom, but I do know this much: never, ever, clear out your family home while you are in the throes of a hangover. Having done the field research here, I can confirm that having Bulmer’s fizzing around the far corners of your brain is precisely the worst mindset in which to return to the house you grew up in, start pulling its contents apart, and essentially dismantle your childhood.

I’ve been thinking about the concept of home a lot lately, like most people. It’s a place made up of simple bricks and mortar, but when it houses the stuff that makes up most of your life, it becomes your anchor in the world. This is probably why most people are apprehensive about the “cancellation” of this Christmas. It’s got less to do with the 12 pubs and getting an iPhone than it is returning to the place where you grew up. If your childhood was a happy one, it’s the place where you can probably be most yourself (and oddly, the one place where you instantly revert to your teenage self, huffing about remote controls and seeking refuge in the box-room).

We hadn’t had a chance to drink in its final moments as our home; to toast our lives within its walls and wave it goodbye

I recently watched a home renovation show in which a grown-up couple went to live with family during the overhaul of their house. The mum didn’t seem all that put out. “Sure most of his stuff is still here,” she shrugged. No matter how much we think we’re adulting, we almost always still leave so much of our former selves with Mum.

After my mother died, I hated returning to the estate I grew up in. It didn’t bring me comfort; rather, I felt like an alien without a visa. The house lay virtually untouched for months, which of course means that you can live in a state of denial for so long, but there comes a day when you have to return to it, and prepare the house for its next family.

Hangover aside, it was truly awful weekend. Harder, in many ways, than the weekend we buried her.

By the time I’d hauled my juddering, hungover brain out on the bus, the skip in the driveway, hungry to devour the stuff that made our family what it was, was beginning to fill. Boxes had begun to pile high in the livingroom; presses and wardrobes were already being emptied. My brothers and father, determined to get this over and done with and get on with their Saturday, were deep within the assignment. We hadn’t had a chance to drink in its final moments as our home; to toast our lives within its walls and wave it goodbye. All that was left to do was put the kettle on and get on with it.

Amid the chintzy swan figurines and the souvenir plates from Mallorca – both standard issue in any 1990s house – we found stuff that made memories return like an avalanche. There were Jackie/Shooter/Bunty annuals bought with paper round money; communion dresses and white lace umbrellas, old teddy bears, report cards that prove we went from “a pleasure to teach” to “needs to apply herself” within a few years. My mother had an overwhelming fondness for hoarding our childhood ephemera, more than likely aware that she’d never have to remove 40 boxes of family stuff from the attic eventually. Maybe she knew that whoever this task would be entrusted to would eventually find moments of joy amid the excavation.

How amazing to see our scrawled childhood handwriting in copybooks, and our youthful creativity and exuberance. How strange to unplug the landline that you felt you’d barely survive your teenage years without. And how mad to think of how feverishly I yearned to be away from the place only a couple of years later. And then came the best ice-breaker. What would we do about the goldfish buried in the back garden? We hadn’t laughed that hard in a long time (sorry, Rocky).

Not having that particular port to dock at certainly makes you feel like a proper adult, but home will never mean the same thing again

The truth is, I expected our emotionally fraught little family to emerge from this weekend more fragmented and displaced than ever. But the process of throwing part of our life away brought us closer together, and somehow readied us for the next phase, of not having a family home as our focal point. For us, it wasn’t going to be as easy as schlepping out to West Dublin. We’d have to make an effort from now on.

In much the same way that an ex-boyfriend, the centre of one’s world for a time, simply becomes someone that you used to know, the house is now just somewhere I once lived. Not having that particular port to dock at certainly makes you feel like a proper adult, but home will never mean the same thing again. But, whatever ended up in the skip or charity shop, we’ve taken the important stuff. The memories – good and bad – go wherever we do.