Seán Moncrieff: I’ll be voting today. But for my kids, not for me

I grew up in a world where it was possible to have a job for life, a pension, to buy a home; a world that wasn’t starting to catch fire 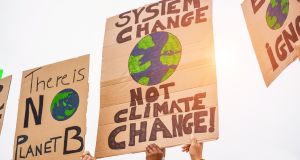 ‘Such is the range of issues their generation is facing, I almost feel like I’m not entitled to express an opinion.’ Photograph: iStock

I’m starting to suspect that some of the kids in her creche have had several birthdays in the last few months. Technically, they should be doing the Junior Cert.

Personally, I’d prefer such events to take place in a nice Michelin star restaurant, but the other killjoy parents always opt for some hellish play centre where the kids get zonked on sugar and chicken nuggets and reach collective decibel levels that can be heard from space. If aliens are secretly listening, they probably think our planet consists of screaming children. No wonder they don’t make contact.

Afterwards, some of her siblings will have to be ferried around to exercise their franchise. There will be a lot of ferrying. Daughter Number One will be returning from Galway. She’ll vote at one polling station. Myself and Herself will vote at another, while Son Number One and Daughter Number Two will vote at a third polling station. I could tell you the reasons, but I want you to stay awake. Life, like proportional representation, is complicated.

Two of them have never voted in a general election before, so in the spirit of parental interference I’ve made sure they know how to vote: just the basics of what a preference means and how that works. They weren’t taught this in school, and I’ve heard myriad stories of otherwise intelligent people putting an X beside three candidates that they like equally, or writing “yes” and “no” beside the pictures.

Who they will vote for is entirely up to them, though like most voters at different stages of life, their concerns differ.

Son Number One’s issue is housing. He’s currently going through the routine despair of attempting to buy his own place. He’s already accepted that he will live outside Dublin and at a considerable distance from where he works, yet all too often he arrives at the first viewing to discover that someone has bid higher than the asking price without having seen it. Or the building is so decrepit that it would be easier to knock it down and start all over again. Every time, there are swarms of prospective buyers.

He’d like to vote for a party that would bring down home prices. Or increase the house/apartment stock and produce the same effect. And while every party says they want to do that, no one claims they can do it quickly.

In the meantime, he has to endure looking at modest places he can’t afford and me telling him it’s good experience. He says he has had enough experience now, thanks very much.

The other two are primarily, also exclusively, concerned with the environment. With the kind of single-mindedness only the young can afford, they find it difficult to understand how anyone can be concerned with anything else.

Yet, interestingly, that doesn’t mean an automatic vote for any particular party. They’ve both gone to the bother of looking up various party websites and emailing questions. Some of the replies have been virtually meaningless. So they’re still thinking.

Daughters Number Three and Four don’t have a vote yet, but in the interest of balance, I did ask. Number Three would vote for anyone who could get The Smiths to reform (featuring a non-crazy Morrissey) while Number Four wants birthday parties on a daily basis.

Such is the range of issues their generation is facing, I almost feel like I’m not entitled to express an opinion. After all, I grew up in a world where it was possible to have a job for life, a pension, to buy a home; a world that wasn’t starting to catch fire.

I will vote, of course. But I’ll be voting for them, not me.