Seán Moncrieff: Family life is a temporal black hole, sucking in every minute

You could ignore the laundry and go for cocktails: but you’ll just return home to an even bigger mound of laundry 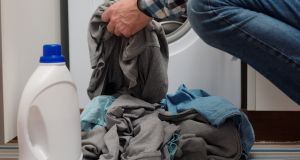 Stay-at-home parents often complain that they can feel their brains turn to mush, and with good reason. Most of what they are forced to think about is drudgery. Photograph: iStock

I may have mentioned, 19 or 20 times, that I moved house this summer. Which meant no holiday. There were a couple of short breaks. A wedding. A junket to Center Parcs that daughter number four enjoyed but made me a little nervous. I kept waiting for the killer robots to emerge.

So, myself and Herself took a notion and went to London just for a night, to see the original stage version of the TV show Fleabag. As this was the last-ever run of performances, the tickets were much sought after. Fortunately, I bagged a couple using positive realisation and by deploying the Power of Yes! That, and six hours queuing on a website.

I wondered if London would be thick with tension due to all the Brexit psychosis, but around Shaftsbury Avenue it was as it always was. Still sunny, jammed with tourists. The Union Jacks in the pubs are more of a tacky design feature than a political declaration. In those west end pubs, they will happily charge you £14 for a G&T. We stayed in a hip hotel with toilets so dark peeing on your shoes was a foregone conclusion.

To say family life can be busy isn’t just a wild understatement; it borders on propaganda

We talked about Brexit anyway. Not that we had anything particularly original to say on the subject: the fact of getting to talk about it at all was the point. That, and all the other stuff we’d been meaning to talk about but hadn’t found the time. There’s never enough time.

To say family life can be busy isn’t just a wild understatement; it borders on propaganda. Family life is a temporal black hole, sucking in every available minute. There’s pick-ups and drop-offs, the school run, picking up the debs dress, the debs meet-the-parents event, the new school schedule, the dinners, the hoovering, the mopping, the shopping, the endless barrels of laundry. And that was just last week.

Stay-at-home parents often complain that they can feel their brains turn to mush, and with good reason. Most of what they are forced to think about is drudgery. Kids are great and all that, but they won’t make any interesting points about Brexit. They say pleeeeze all the time and refuse to eat vegetables. They are ruthless engines of neediness, and when they have finished hollowing out their parents, they fall asleep, leaving the grown-ups with nothing in the tank; certainly not enough for a conversation.

Instead, the parents turn to the gently narcotic effects of Peaky Blinders or Bake Off. Any talk consists of going through the list of things to do the next day. Herself loves a good list.

Of course, I love my family and I would never dream of stinting on my responsibilities. I should say I wouldn’t have it any other way. But in truth, I would. I would like it if you could have a recess or even an occasional prorogation from all the family stuff. No idea how though.

The usual trite advice is that you should “make the time”. But how? With a time-making machine? The list of things that have to be done still have to be done. You could ignore the laundry and go for cocktails: but that simply means you’ll return home to an even bigger mound of laundry. And because you’re half-cut you’ll put a red T-shirt in a white wash.

Yet I have little to be moaning about. After all, we did manage to get away for the night. I am part of a couple that can share the workload. There are people who have to do all this by themselves, with little money or support; certainly not enough to get away. And some of them have to endure the accusation that they’ve had babies deliberately so they can sponge off the State; to – wait for it – avoid working. Some people don’t know what work is. Literally.