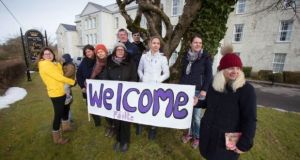 Residents of Lisdoonvarna in Co Clare rejected a government plan to settle asylum seekers there in a lopsided vote: 197 against, 15 in favour.

Authorities ignored the vote and bussed in dozens of people from Africa, Asia, eastern Europe and the Middle East to a hastily converted hotel in April 2018. The newcomers feared hostility and isolation in a windswept village with few amenities and poor transport links.

It was a forced union laden with irony: Lisdoonvarna was famous for a venerable matchmaking festival that draws tens of thousands of visitors each September.

Now, 16 months later and with a new festival under way, it turns out that on one level the match has largely worked: villagers and asylum seekers have warmed to each other.

The new arrivals said initial anxiety had turned to relief as they encountered friendliness and generosity. Emboldened, several plan to attendthe matchmaking festival, which started on Saturday and continues until the end of September.

“People are good to me. They make me feel welcome,” said Mputu Wabalekelayi (30) from the Democratic Republic of the Congo. The single mother-of-two is open to romance. “I want to see the music and dancing. Sharing is good. Maybe I’ll meet somebody.”

Sayed Ali ( 20) who arrived from Bahrain, said rudimentary English would not deter him from socialising. “People say hello. I feel safe. It would be nice to meet girls.”

Ireland’s policy of accommodating asylum seekers in rural hotels - a response to overcrowding at shelters in Dublin - has prompted protests from residents who cite cultural differences and strain on public services. Arsonists in Roosky, Co Roscommon, twice attacked an empty hotel earmarked for asylum seekers. Authorities cancelled the move.

Lisdoonvarna, in contrast, has channelled the spirit of its festival. Launched 160 years ago to find wives for farmers, it has broadened into a global, LGBTQ+ friendly event for singletons and music lovers. “Some matches are made in heaven but the best ones are made in Lisdoonvarna,” says the slogan.

The 107 asylum seekers at the King Thomond, a three-star regency-style hotel just outside the village, have settled into the community without backlash.

The children attend schools and many parents have found work. Volunteers from Lisdoonvarna and neighbouring villages visit the hotel to teach knitting, host coffee mornings and help with transport.

“The people are good, decent,” said a Zimbabwean woman who declined to give her last name. With her meagre cleaner’s wage she half-joked about storming the festival with a friend. “We are looking forward to getting some men.”

A spa town, Lisdoonvarna is accustomed to foreigners. Residents sympathetic to hosting people fleeing persecution appear to have been underrepresented in the vote.

Increased school enrolment should help Lisdoonvarna avert the school closures that afflict other rural communities with dwindling populations. Hotels, B&Bs and restaurants are grateful to have workers willing to scrub pots and toilets - jobs difficult to fill.

Asylum centres can be grim, with bad food and surly staff, but the King Thomond is well-run, said Orla Ní Eilí of the Clare Immigrant Support Centre. Asylum seekers there endorsed that.

Willie Daly, a fourth-generation matchmaker credited with 3,000 marriages, relished the prospect of matching asylum seekers with some of the estimated 40,000 visitors expected to pack the village in coming weeks.

He meets clients in the Matchmaker bar and notes their details in a leather-bound folder tied with shoelace known as “the lucky book”. He advises clients to be relaxed - intensity, or worse, desperation, can repel suitors. And to be decisive. “The good-looking and the good dancers, they get spoiled with attention and sometimes can’t choose.”

Despite the festival bunting and “love is in the air” slogans, Lisdoonvarna is hardly a fairytale ending for asylum seekers.

Ireland’s system of direct provision satisfies material needs but traps asylum seekers in a bureaucratic limbo of dependence and uncertainty about their fate that can last years, causing anxiety, stress and depression, according to critics.

Ending up in in rural areas - a money-saving tactic for the State, which rents hotels on the cusp of closure - can compound feelings of isolation and frustration.

“I’m stuck, not happy,” said a woman who fled violence in eastern Europe. She had no intention of joining the revels. “The festival means nothing to me.”

Another woman, aged 29, said she had fled an arranged marriage in the Middle East to a much older man. She was bemused at the prospect of being matched at a festival still associated with elderly bachelors.

Vikisha Sesay (25) in contrast, was intrigued. Having escaped homophobia in Sierra Leone, Sesay hoped to meet other members of the LGBTQ+ community and to see Irish craic in action. “I want to experience it. Why not?”–Guardian

Why do we feel sicker at night?
9