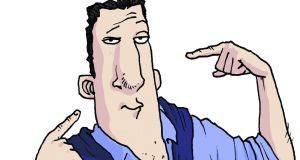 “Why don’t we just accept the dude’s offer of a Gorda escort back to Farranfore?”

Verbum Domini Manet in Aeternum is a phrase that won’t mean much to most people. But anyone who has ever passed through the French-polished, lavender-smelling hallways of Mount Anville Secondary School will recognise it as the motto of the Mount Anville Peace and Justice Commission, which – roughly translated – means, “You want to see stubborn? I’ll show you focking stubborn!”

My wife – the commission’s founder and Honorary Life President – quotes it to me on a regular basis. Like last summer, when she stayed up for four days and nights to make 1,600 cupcakes for a bake sale in aid of the Foxrock Children Without Skis Foundation, fuelled by caffeine suppositories and licking the top of a nine-volt battery to shock herself awake every time she felt her eyes close.

1 Leo Varadkar is fourth Minister to restrict movements after negative Covid-19 test
2 Dublin ‘could go to Level 4 or Level 5’ if cases continue to rise
3 Let coronavirus spread through under-60 population, Dáil committee told
4 Ireland’s top earners ‘do not see themselves as rich’, study finds
5 IRA chief of staff tipped off gardaí about Arms Trial guns, says Seán Haughey
6 Bank of Ireland sees more than 1,400 staff apply for redundancy
7 Gordon D’Arcy: the next fear for Irish rugby is England in Twickenham
8 Miriam Lord: Let’s call a spad a spad – this Government has woeful timing
9 Air travel never going ‘back to way it was’
10 How Goodfellas and the gangster class of 1990 changed Hollywood
11 Covid response leaves no surprise that tensions are rising across school system
12 Katherine Ryan: ‘I definitely felt shame as a single mother, the way people word things’
13 Michael McDowell: Public are getting the mushroom treatment
14 What is wokefishing, the latest online dating deception?
15 Leaving Cert student withdraws court challenge after getting place on dentistry course
16 Volvo’s XC40 plug-in hybrid beats the BMW X1 – how did that happen?
17 Micheal Harding: The day I stopped killing bees
18 Sitka spruce plantations ‘affect your mental health’ – Leitrim farmer
19 Dublin farmer discovers overnight rave on his land
20 US senators to consider Trump’s supreme court nominee
21 Róisín Ingle: I hated those wearable ‘fitness yokes’. Now I’m one of those people
22 Seán Moran: Fallout from Tyrone final celebrations will concern GAA
23 South Dublin land at €19m has scope for up to 500 homes
24 Coronavirus vaccine: 15 billion doses needed to inoculate the planet
25 Why are men still explaining things to women?
26 How to identify and develop soft skills in a pandemic
27 Tesla’s value drops $50bn as Musk’s cheaper battery three years away
28 Traveller poverty, work and discrimination focus of EU report
29 Róisín Ingle: We’re in a different pandemic place now. Nobody’s quoting Seamus Heaney any more
30 Our neighbour says he has permission to build on our boundary wall. Can he?
31 Pro14 teams need private planes to keep show on the road
32 Should I switch bank now with Ulster Bank at risk of closing?
33 People aged 15-34 now account for 40% of Covid-19 cases
34 Bord na Móna to raise €1.6bn for climate action projects
35 Q&A: How do new Covid-19 restrictions in the UK differ from Ireland?
36 AIB becomes first Irish bank to launch green bond
37 Living with Covid plan: What is in each of the five levels?
38 After Ruth Bader Ginsburg: Hypocrisy or not, Republicans unable to pass up supreme court gift
39 Retailers creaking under lockdown rents as industry warns ‘Nama-like’ problem ahead
40 NI Assembly passes motion rejecting Internal Market Bill
Real news has value SUBSCRIBE