‘I should have worn my stretchier, more forgiving pants,’ my friend remarks 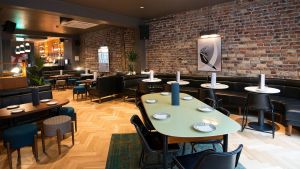 Eleanor Walsh springs to mind when food people of a certain vintage see smokies on a menu. The chef made the flat bowl of smoked fish cooked in cream and cheese the signature plate at Eden back in the 1990s. It was a back-slapping hug of a dish that has been popping up on Dublin tribute menus ever since. But we know smokies have older roots, thanks to the restaurant historian Máirtín Mac Con Iomaire. John Howard of Le Coq Hardi had it on the menu in the 1970s. Tribunal anoraks will remember Le Coq was Charlie Haughey’s favourite restaurant.

The idea that the Boss might have done deals over a plate of smokies makes it even more fitting to see them remembered as a legacy of Eden. The restaurant was a ground-breaking arrival in the heart of Haughey’s Left Bank version of Temple Bar. Instead of the bus depot city planners had in mind, Haughey wanted a cultural district. Joe Duffy could fill a Liveline show about whether drink culture is the thing that really thrives in the cobbled streets and squares of the district, but food culture has quietly sprouted in its calmer corners.

It’s Saturday night and there’s a crowd of people looking giddily happy to be standing under a Christmas tree exploding out of a wall one floor up the corner of the Temple Bar pub. A few steps away, smokies are back on the menu of Crow Street, a restaurant named after its street. It’s the former Avenue restaurant run by restaurateur Nick Munier, now taken over by the people behind The Sussex on Upper Leeson Street and The 105 Cafe Bistro in Clonskeagh.

Putting smokies back on a Temple Bar menu is a statement of intent. Nothing new will happen here folks. The question is whether the nostalgia will taste any good?

I never made it to Avenue so I don’t know how much they’ve changed here but it’s nice in a sepia-lit biscuity brown brick and timber look. The lighting is set to paleo cave with guttering fire level. Maybe this is a byproduct of the mobile phone revolution. Lights get dimmer because we all carry a pocket torch like good digital boy scouts these days.

So Five Miletown goats’ cheese has been fried in fluffy gobstopper-sized balls and teamed with thinly-sliced petals of pale pink pickled beets, looking like teddy bear luncheon meat (without the gag factor). There are candied walnuts, a kitchen trick so satisfying it seems odd they don’t feature more prominently on other menus. There is pickled pear and a portion size that’s more generous than most to be found at mid-price range between the canals. Light on innovation, it’s heavy on flavour and texture and a great version of this Dean Martin song in food form.

Those smokies are smaller, served in a cast-iron skillet, delicious chunks of tasty fish. The cherry tomatoes I remember as flavour blisters baked into the original dish are on the side here, cooked as all tomatoes at this time of the year should be to have any flavour and tossed on fresh rocket. It’s a simple but very satisfying version of a Dublin dish.

Even before the generous portion sizing, the menu reads like a feeder. “I would have worn my stretchier, more forgiving pants,” my friend remarks. Her crispy lamb shoulder is a deftly cooked rolled-piece of meat, muttony and soft inside and crisp with a hint of spice on the outside. It comes with a square of gratin that manages to be dense and comforting but with a tang of what I think is crème fraîche to prevent it sinking under its own heft. There’s a thready meat-only croquette, which I love.

The special is duck, a small mountain of rare, juicy slices served with a “duck cigar” of rolled meat with a panko crumb flavoured with orange. It’s all deft and delicious.

We finish with a selection, which, if the Restaurants Association of Ireland wants to award a “least innovative dessert list in Leinster” gong at its ceremony next year, I’m nominating this one. Rhubarb and apple crumble, and a portion of ice cream and sorbet with berries do precisely what they say on the tin.

“I’ve a crow to pluck with you,’’ used to be a phrase in our house when someone had something they needed to get off their mind. There’s nothing controversial happening inside the walls of Crow Street, nothing to rouse the horses out of droopy slumber, much less startle them. Instead, it’s large plates of comforting food, cooked really well. And in these days of chef shortages, shiny concept restaurants and flown-in food service reheats, that’s something to crow about.

Dinner for two with glass of wine, sparkling water and a mint tea came to €95