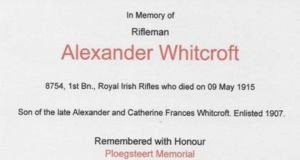 Despite being born almost exactly 130 years ago (29th October 1889), Alexander Whitcroft was my first cousin – a relative, but a stranger. His father, also Alexander, had married Catherine Frances Nelson, my father’s eldest sister in Ardee 1885, when my father was scarcely 12 months old. Being born over 50 years later, I knew nothing of my cousin Alexander, and now wonder how much my father had known about him.

Alex Snr was the live-in schoolmaster at the Charlestown Schoolhouse, Ardee, Co Louth. He later taught in Clonakilty and Castlebar, where Alex Jnr. was born. By the early 1900s, the family had moved to Belfast, and in 1907 the young Alex enlisted with the Royal Irish Rifles.

After the outbreak of the first World War, Alex Jnr was assigned to the British Army’s 8th Infantry Division, as part of the General Haig’s First Army. The Division was posted to Flanders in November 1914.

Having achieved an irrelevant success at the Battle of Neuve Chapelle in March 1915, where young Alex at the age of 25, had his first exposure to the realities of infantry warfare, Haig pushed on to try capture the German position at Aubur’s Ridge. Haig was not aware that German troops and defences had been reinforced following their earlier defeat at Neuve Chapelle.

The attack, lasting less than a day, was a catastrophic disaster

Alex Jnr was amongst the countless soldiers tasked to take Aubur’s Hill on 9th May 1915. But the attack, lasting less than a day, was a catastrophic disaster.

British bombardment of German trenches started at 5 am, and half an hour later Alex Jnr’s infantry battalion, crossing a narrow expanse of no-man’s-land, came under heavy machine gun fire as they left their trenches. An hour after the initial bombardment, orders were issued to stop the attack – but hundreds of men were stuck in no-man’s-land under continuous German gunfire.

It took 3 days to recover the wounded at Aubur’s Ridge. But Alex Jnr. was not amongst them. Nor were his remains amongst the bodies recovered later.

In August 1915, my aunt Catherine was informed by the War Office that her son Alex was missing, presumed dead, lost in action on 9th May 1915 at the Battle of Aubur’s Ridge.

Pte Alexander Whitcroft, Royal Irish Rifles, is commemorated in the Mayo Peace Park, Castlebar, and the Ploegsteert Memorial, Belgium. He was both a “relative” and a “stranger” – lost, but not forgotten.