Róisin Ingle: The Gay Byrne I knew – a friend, a mentor, a hero

We are a better, more mature, kinder country now because of Gay Byrne 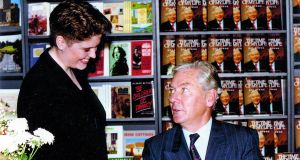 Gay Byrne is gone and I’ve been crying and thinking about how whenever I’d see him out and about over the years I always greeted him the same way.

Because I did. It might seem strange but I had very deep feelings for someone I got to know mostly from watching him do his thing on the telly. I don’t think I’m the only one.

When I told him I loved him, on Grafton Street, or at a theatre opening night, or in the lobby of the National Concert Hall, he always responded the same way. With that unmistakable delivery, gentle and brusque at the same time, repeating words for emphasis.

He knew a devoted fan when he saw one.

I’m not sure Gay Byrne was a hugger, not in the casual sense, but when I reached for him he always indulged me and I was grateful every time. When I think about Gay Byrne, that is what I mostly feel – gratitude. For the way he changed this country on The Late Late Show, forcing us to look, to discuss and to argue over things we’d long brushed under that gargantuan cliché of a national carpet.

One of the perks of journalism is sometimes getting to meet your heroes. Gay did not disappoint

Every week on The Late Late and every morning on the Gay Byrne Radio Show he was a conduit for all of it. He had an unerring instinct for all our mucky and sometimes marvellous linen that so badly needed to be aired.

I loved Gay for a long time. It might at first have been Freudian – my dad died when I was eight and my feelings for him have always felt paternalistic – but as I grew older my admiration became more focused: I was in awe of his broadcasting, his ease in front of the camera, his ability to gauge the mood of an audience, his listening ability, his peerless skill in the art of conversation.

He was an exceptional broadcaster. I knew a class act when I saw one.

Not everyone did. None of my school friends understood why as a teenager I queued up in Eason’s on O’Connell Street to meet him and get my copy of his autobiography The Time of My Life signed. There’s a picture of that moment: I am wearing an admiring smile and a smart black jacket my brother had brought me home from Berlin.

What did I love about Gay? Everything, really. His voice, his toy show jumpers, his slacks, his mannerisms – “ok, ok”, “roll it there, Róisín”, “roll it there, Colette” – his kindness to Sinead O’Connor, his chats with Nell McCafferty. They are all as much the soundtrack to my youth as the joyous opening beats of Wake Me Up Before You Go Go.

One of the perks of journalism is sometimes getting to meet your heroes. Gay did not disappoint. We were on texting terms over the years. He’d text when I wrote a column he liked, always encouraging and full of gratifyingly specific praise. I’d text him whenever I needed another shot of Gay. Then we graduated to real life meetings. He brought myself and Ann Marie Hourihane – another Gaybo fan – for lunch in Donnybrook once. He drank small glasses of whiskey. And we talked for hours.

Lately, he’d been frail but he was kind enough to meet me for coffee when I asked in the Intercontinental Hotel near his home in Sandymount. We had another meandering, satisfying chat about books and music, our mutual friends Harry and Rita, his daughters Crona and Suzy, and his amazing wife Kathleen.

Then he drove me back into town. On the drive, I tried to persuade him to give his blessing to a Gay Byrne tribute night Cilian Fennell, Trevor White and I were hoping to organise in the Little Museum of Dublin. He was appreciative, but insisted it wasn’t his kind of thing.

“It’s very kind of you, very kind, and there are people who would love to be given a night like that but I’m not one of them”.

And he wasn’t. It’s what made him different.

Now Gay’s gone. I’ve lost a friend, a mentor, a hero. And what keeps occurring to me is the fact that no other Irish broadcaster could have managed those thousands of conversations over the decades with the same wise touch, or could have borne witness to and held a space for a country that was changing so rapidly.

We are a better, more mature, kinder country now because of Gay Byrne.

But then you knew that, didn’t you?