Gay Byrne: ‘I am no different to hundreds of thousands of people who lost money’

Despite sitting at the top of the ratings at RTÉ, he lost his savings twice, 20 years apart 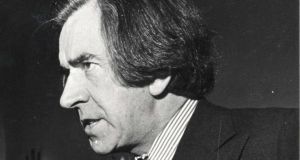 Gay Byrne may have sat at or near the top of the TV ratings for most of his half-century in broadcasting but his financial health was far less consistent. He lost his savings twice, 20 years apart.

Embezzled of more than €250,000 by his accountant and friend Russell Murphy – a theft Byrne discovered only after Murphy’s death in 1986 – the broadcaster spent 12 years replenishing his retirement fund only to see his nest-egg disappear again in the 2009 banking crisis and property crash.

Hosting The Late Late Show and sitting behind the microphone for his five-day-a-week radio show made Byrne RTE’s biggest draw for advertising revenue. He was handsomely rewarded by the national broadcaster. In 1998, his final full year with the station, he was paid almost €500,000.

It may have been a lucrative existence but it was far from assured. For his first quarter-century at the broadcaster, he was employed on rolling 13-week contracts. It was only after a Boston TV station attempted to headhunt him in the 1980s that RTÉ extended his contracts to two-year periods.

Despite working for 41 years at RTÉ, he was never a member of its pension scheme. This made his personal investment all the more important and his losses all the more severe when they came.

Byrne’s daughter Crona, who was Russell Murphy’s goddaughter, recalled in 1999 her father’s demeanour when he learned of the theft by his friend: “I’ll never forget seeing Dad that evening. He couldn’t talk. He couldn’t look at us. There was this dreadfully upset man sitting in a chair.”

To his credit, Byrne refused to speak publicly about the betrayal because he felt it would have been unfair on the Murphy family.

Even after the theft of his savings, Byrne turned down a lucrative offer to join Century Radio, Ireland’s first independent national station.

The approach came from impresario Oliver Barry who one Saturday in 1998 called out to Byrne’s house in Howth and laid a IR£1 million (€1.27 million) bank draft on a table to cover his salary for three years. Out of a loyalty to RTÉ, he declined the offer.

By the time Byrne retired from RTÉ in 1999, he had started investing his money with property syndicator to the wealthy Derek Quinlan, the former tax inspector turned accountant. Byrne’s investments with Quinlan, which included a Budapest hotel and a property in Mayfair, London – bankrolled mostly by Anglo Irish Bank – came crashing down when the music stopped in 2009.

Still, he never accepted that he was a bad judge of financial advisers.

“I was prudent,” he said in 2014. “I am no different to hundreds of thousands of people all over the country who lost money.”

The financial losses meant he had to continue working into his 80s. He presented a jazz programme on Lyric FM on Sundays, hosted the The Meaning of Life, the occasional series of TV interviews for RTÉ, published a book and even appeared in a stage show with his wife, Kathleen Watkins.

The fallout from the economic crash haunted him for some considerable time. He and business partnerships he was involved in were sued by property funds that had taken over loans picked up from the carcass of Anglo Irish Bank and other defunct banks.

One case was settled in June 2017 only for another to begin five months later when a fund, Feniton Property Finance, sued him, his wife and daughters, Suzy and Crona, for €1.2 million over a loan from Bank of Scotland Ireland in 2007 to the Quinlan partnership. This in turn was settled in February 2018.

In 2009, he was photographed among stunned pensioners who turned up at Anglo Irish Bank’s extraordinary general meeting after the nationalisation of the bank to figure out where their money had gone.

“I am frightened for people of my generation,” Byrne said in 2011. “They have introduced this constant, low-level anxiety into our lives, which we could well do without. It all hangs on a thread anyhow.”