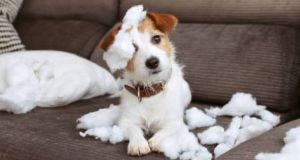 Now there are two of us at home all day, we are running out of excuses for not getting a dog. Photograph: iStock

It suddenly seems as though everyone I know who said they would never get a dog has changed their minds. This is yet another pandemic lifestyle change I didn’t expect. Lockdown strikes again.

I am not a dog person. This does not make me proud. The evidence for my non-dogginess is plentiful and embarrassing: I am constantly misgendering friend’s pets and, equally as inconsiderate, I sometimes call them by the wrong Christian name. I see people calling their dogs “doggos” on social media and this makes me have murderous thoughts. Also, when asked by a friend “will I take him/her outside?” when their dog is becoming too rowdy, instead of replying “no, course not, he or she is grand”, I say “yes, please” far too quickly.

I don’t like being leapt upon or licked unexpectedly or ambushed by requests to throw balls.

I get enough of all that with parenting, to be honest.

This was always our go-to excuse to the children for not getting a dog: “We are out all day, us at work and you at school. Who would look after the poor little mite?”

Now there are two of us at home all day and four of us at home for half of the day. We are running out of excuses. And, irritatingly, people close to us keep announcing their big dog news.

My brother Peter got a dog. Our friend Brian is about to get one.

My other friend Lisa – a woman who previously expressed her deep concern that I was taking on too much extra responsibility by getting a hamster – is now getting a dog. A labradoodle, if you wouldn’t be minding.

She rang me and told me the news like I was a priest and she was going to confession: “Róisín, forgive me, but we are getting a dog; it’s been two weeks since I last told you I was never, ever getting a dog.” She has twin girls the same age as ours who ran the kind of well-executed and years-long Please Can We Get A Dog campaign to rival Joe Biden's.

Lisa knows well her change of heart means we are now under sustained and unrelenting pressure to follow suit.

So I’ve been thinking about dogs. I’ve been wondering why I am so dog-averse. Without spending too much money in therapy I’ve realised it all goes back to Sam.

One day, in the 1970s, my mother took the big pram for a walk to Herbert Park in Dublin. There were small people, including me, in the big pram and other bigger children walking beside it. In Herbert Park, where the people working in the adjacent bread factory would sometimes throw fresh, warm loaves of bread over the wall to us to feed the ducks, we met Sam.

Sam was a friendly, brown and white mongrel with a bit of labrador in him. We played with him in the park and then, according to my mother, Sam followed us all the way home to Sandymount. He wanted to come in but with all the children my mother already had, she didn’t want another mouth to feed.

The next day Sam was still outside the house. And so he became part of our family. He fit in well with the culture of the house. It was every child or dog for themselves. Survival of the fastest to spear the last bit of chicken from the carcass kind of home.

My older sister Rachael recalls Sam’s independent spirit. He was a sort of “self-minding” dog she told me when I rang for her memories. Sam would disappear for a few days but he’d always come back. He knew we were Team Sam but he also knew he couldn’t fully rely on us for emotional sustenance or food, so he found other sources. When I asked Rachael did she love Sam, she said love was too strong a word but he was part of the family and a good guard dog.

But I know I loved that dog. And my mother did too. He got a tumour when I was probably around my daughter’s age and Rachael, who was driving by then, had to take him to the vet to be put down or as Rach – ever the pragmatist – puts it, “to be killed”. My mother couldn’t do it the first time so they had to come back home. But then, because the vet had told her how much pain Sam was in, she brought him in again and his suffering was put to an end.

When I let myself look back, I think of Sam as a dear childhood friend. I remember holding him on the stairs before he went off to the vet, saying goodbye. I remember the feel of the bulging tumour on his body, weighing him down. I remember crying at the loss of our independent, self-minding, lovable dog.

I think what is behind my reluctance to get a dog of our own is that I don’t want to go through that loss again. And so, I will deprive myself of that kind of love because with it comes inevitable loss.

Maybe the part of me that is a dog person has just been packed away. Maybe she could be unpacked. Maybe.

Look, I’m never, ever getting a dog.

(Don’t even get me started on doggos.)

But I might be starting to think about it.