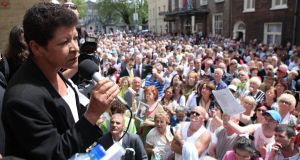 The campaigner for survivors of institutional abuse, Christine Buckley, was one of the first former residents of the Goldenbridge orphanage in Dublin to go public with the story of her childhood experience there.

Born in Dublin in 1946, she was the daughter of a 31-year-old married Dublin woman and a 20-year-old Nigerian medical student. At three weeks she was given up for fostering. In 1950, after several foster homes, she was sent to Goldenbridge, run by the Sisters of Mercy.

She recounted her memories of Goldenbridge in a TV drama-documentary Dear Daughter , broadcast by RTÉ in 1996. Director Louis Lentin used dramatisations to depict the regime endured by Buckley and her fellow residents. Participants re-enacted childhood activities: in one sequence making rosary beads and telling how as children they had to meet a quota of 60 sets of beads per day.


Violence
The children, known by number, lived with constant violence. The accounts of physical and mental cruelty were truly shocking. Tales of beatings, scaldings and infants strapped to potties made for difficult viewing. Christine Buckley was once so badly beaten she received 100 stitches in her leg.

Dear Daughter attracted a huge audience, and the sympathy of most viewers and media went to the former residents. The Sisters of Mercy issued an apology: “Life in the Ireland of the 1940s and 1950s was generally harsh for most people. This was reflected in orphanages which were, for the most part, under-funded, under-staffed and under-resourced. In these circumstances, many sisters gave years of dedicated service. Notwithstanding these facts, clearly mistakes were made . . . we now ask for forgiveness for all our failures.”

Buckley described the apology as “cynical”.

However, Dear Daughter did have its critics. In this newspaper Michael Foley criticised the media’s “rush to judgment”. He wrote: “There are those who disagree with Ms Buckley, and without any disrespect to her or her memories, have a different story . . . but few in the media were interested in listening.”

An edition of Prime Time featured contributors who portrayed Goldenbridge in a positive light, and an interview with the orphanage’s former resident manager, Sister Xaviera.

Buckley responded: “This is not about one nun – it is about years and years of abuse that went on behind walls. We want an independent inquiry. How many millions were spent on the Beef Tribunal? That was an inquiry into beef. It seems we are less than beasts.”


Bitter disappointment
After her Leaving Cert, Buckley moved to Drogheda and qualified as a nurse. She married in 1977, and in 1983 began the search for her parents. She was bitterly disappointed that when she finally traced her mother, she didn’t want to know her.

She subsequently traced her father and wrote to him in Nigeria. His reply began, “Dear daughter”, which became the title of the documentary.

He visited Ireland in 1992, and both were invited on the Gay Byrne Show , prompting thousands of listeners to contact her requesting help to trace their parents.

Bertie Ahern and Micheál Martin were among the few politicians to give her a hearing, and she praised Ahern for his apology on behalf of the State in 1999. She also credited him with establishing the Commission to Inquire into Child Abuse and the Residential Institutions Redress Board.

In the 1997 general election Buckley ran as an independent in Dublin South. In 1999, with Carmel McDonnell Byrne, she founded the Aislinn Centre to support former residents of industrial schools, and worked there as a volunteer. In 2010 she was named European Volunteer of the Year, and in 2012 was awarded an honorary degree by Trinity College Dublin.

She is survived by her husband Donal, sons Conor and Darragh and daughter Cliona.

‘When you do put your clothes back on, you’re changed’: The nudists of Killiney
6

How do I stop my boy putting his hands down his pants?
10