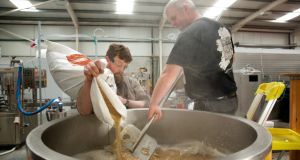 “Forget your bottle of Chianti and drink my Sheep Stealer instead.” So says Richard Siberry of Black Donkey Brewery. I would never advise against drinking wine, but maybe this month you should try a bottle or can of Irish craft beer as well.

With the closure of pubs around the country, many of our craft breweries have lost 80 per cent or more of their business. Some have closed temporarily; others have drastically cut back production.

Siberry is head brewer and co-founder, with his wife Michaela, of Black Donkey, based in Ballinlough, Co Roscommon. “Effectively we have shut down,” he says. “We have tanks full and plenty of floor stock, but have stopped brewing. Fortunately we have never gone down the big IPA route – largely because of a personal preference for yeasty and malty beer, and these have a longer shelf-life – many actually improve in bottle. So hopefully there is nothing I’ll have to pour down the drain.”

Roughly half of their business was kegs with pubs. “A lot of our off-licences are tied to a pub so a good number of our customers closed both of them. Some have subsequently re-opened.” The majority of their customers are “between the Shannon and the Atlantic”, with a few key accounts in Leinster.

“We’re in a cost-control mode; certain bills, like excise duty and rent, need to be paid, but we’ve had very little leeway from our creditors. If we can’t last two or three months without income, we may not be able to come out of this. Businesses like ours need to look inward to survive and come out the other side. And when we do, let’s party like it’s 2020 all over again.”

Sheep Stealer is their best-known beer and probably their best seller, but I suspect Siberry prefers his Underworld Savage Ale, made using local Roscommon wild yeasts. “It seems to capture more attention overseas, but we believe it is a unique native Irish product, 95 per cent of everything in the bottle is Irish,” he says. Savage Underworld is a subtle, dry ale with delicious citrus and soft fruits finishing with a beguiling earthy touch.

How can I tell my husband it is over and I want a divorce?
2

The pick of the Dublin restaurant meals to go
3

The trained GP who can’t work in Ireland, despite the shortage
9