Former nurse was a dedicated parent who cherished her friendships 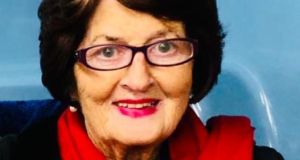 When Sadie Kennedy Power’s funeral procession drove past her home in Castleknock, more than 60 neighbours gathered on the footpaths and broke into song as the hearse passed by.

A woman of exquisite style who loved her Dior red lipstick, classic pearls and bright pashmina, Sadie Kennedy Power was the “centrepiece” of her community and brought love and happiness to people’s lives.

Born in Abbeyleix, Co Laois in 1945, Sadie moved to London after school where she trained as a midwife at Whipps Cross Hospital. “I think she was paid very little but loved her life there,” remembers her daughter Sarah. “She spent her wages on nice shoes and clothes and that never changed. She was happiest when going through the clothes rails.”

After completing her training in the UK, Sadie moved back to Dublin to work at the Rotunda before moving again to New York where she worked in a hospital specialising in plastic surgery. “She was one of the first nurses to really be trained in plastic surgery which was becoming more of a celebrity thing. She used to talk about the famous music managers she nursed back to health.”

Shortly before leaving for the US, Sadie had met her future husband Richard. However, she was determined to see the world and go to America before settling down, says Sarah. She returned to Ireland in the early 1970s where she lived in Deerpark, Castleknock, and raised her three children; Richard, Sarah and James.

She gave up working as a nurse and helped run pubs and betting shops with her husband and later as a single parent. “Nursing was her vocation, she missed it, but back then you gave up your work when you married. But she stayed on as a nurse for all her friends and family. She was always the person you’d ring if something was wrong. She was our personal medical adviser.”

Always a believer in hard work and the importance of a good education, the question her children always asked themselves when facing a challenge was: ‘What would Sadie do?’

Known to her five grandchildren, who she adored, as ‘Sadie Gran’, she was a warm and selfless mother and friend who found comfort in her spirituality and prayers to St Anthony. As a single parent, she cherished her friendships. More recently, she made new friends through active retirement and enjoyed countless trips to concerts where she was “the belle of the ball”.

In her later years, Sadie moved to Castleknock’s Auburn Drive where she often remarked she had found the kindest people she ever met. She started suffering ill health five years ago and on Tuesday, March 24th, she was diagnosed with Covid-19. Six days later, on March 30th, she died aged 74 in Beaumont Hospital surrounded by her three children and the staff of St Peter’s ward who cared for her in her final days.

When her funeral procession drove past her home, more than 60 neighbours from Auburn Drive gathered on the footpaths and broke into song as the hearse passed by. “Because there was no traffic it was dead silent,” says Sarah. “We were engulfed by the warmth of the lyrics ‘Be Not Afraid’ sung by neighbours in the piercing sunlight of a cool, early April morning. It was a surreal and intimate celebrate of Sadie’s life befitting her unique personality and warmth.”