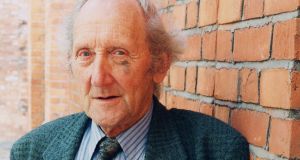 Paddy Fahey: Modesty prevented him from going into a studio as he didn’t want to appear “swell-headed” to his neighbours.

Irish traditional music lost one of its finest composers and players in the passing of Paddy Fahey at the age of 102. His tune compositions, some 60 in number, were lyrical and elegant, melancholic and haunting, and have entered the repertoire of almost every fiddle player in the country. His jigs, reels and hornpipes have left an indelible imprint on our musical tradition.

Born in the year of the Rising, 1916, and a native of Kilconnell in east Galway, Paddy Fahey grew up on a farm in Killaghbeg House. He was one of four children, and both his parents were musicians. His father, Jack Fahey, was a well-known fiddle player who formed the Aughrim Slopes Céilí Band in the 1920s. As a young fiddle player, Paddy toured extensively with the band at home and in England, Scotland and Wales, as well as in the US. The band won an All Ireland in 1953 and in 1956 they recorded an album on the HMV label.

Not a man for the spotlight, Paddy Fahey never recorded an album of his own tunes, nor have his tunes yet been published. But anyone who has heard his tunes played by east Clare fiddle player Martin Hayes, The Bothy Band’s Kevin Burke and others will be well-acquainted with the sinuous nature of his compositions which were ideally suited to the fiddle. Paddy’s modesty extended to the manner in which he named his tunes, all of which were numbered rather than ascribed individual names.

Renowned accordion player Joe Burke knew Paddy well, and spoke of how he was a progressive farmer who was known for his wit and fine storytelling ability, albeit one that flourished in the quiet corners and never in the bright glare of centre stage. He was a quiet and thoughtful man who wrote quiet and thoughtful tunes, and if he wasn’t playing one, he was whistling one. Paddy Fahey’s tunes were like no others: replete with arpeggios that exploited the full range of his chosen instrument.

Recognition came through the widespread interpretation of his tunes by other musicians. In 2001, Paddy was feted as Composer of the Year by TG4’s inaugural Gradam Cheoil awards. His performance at that concert, in the company of Liz and Yvonne Kane, two fiddle-playing sisters who were great acolytes of his, is possibly the only televised record of Paddy Fahey playing live: a remarkable occurrence in an age of 24/7 media coverage. Fiddle player Breda Keville is known for her acute and sensitive interpretation. Martin Hayes and Dennis Cahill’s iconic 1997 album, The Lonesome Touch, captures the essence of a few of Paddy Fahey’s tunes in all their spare, self-effacing elegance.

Composer Dave Flynn wrote of Fahey’s seminal influence on other musicians, and on him personally, identifying Paddy as “the greatest Irish composer of the 20th century”. Flynn compared Fahey’s compositions to those of iconic Hungarian composer Bela Bartók: “In their small way, they are as perfect as the grandest masterpieces of musical art. They are, indeed, classical models of the way in which a musical idea can be expressed in all its freshness and shapeliness – in short, in the very best possible way, in the briefest possible form and with the simplest of means.”

Modesty prevented Paddy Fahey from going into a studio. When asked by Joe Burke to explain this, Paddy responded that he didn’t want to appear “swell-headed” to his neighbours. Instead he relished playing with musicians whom he liked. Paddy Kelly, a neighbouring fiddle player and composer, was a great influence, as was his father, Jack Fahey. Martin Hayes captured the essence of Paddy’s music on social media following his passing, when he said: “Paddy Fahey’s music is a statement of beauty, refinement and elegance. One’s fiddle never sounds so good as when playing one of his tunes. What a beautiful legacy of music he has left us.”

He is survived by his wife, Anne and son, John Joe, and was predeceased by his brother, Dan, and his two sisters, Jenny Campbell and Annie May (Babby) Fahey.