Going by the pregnancy coverage, ‘Baby Sussex’ will be scrutinised even more than his cousins 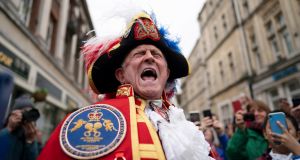 And so, one of the world’s most closely monitored pregnancies has come to an end.

After months of speculation, rumour and conjecture, Meghan Markle and Prince Harry welcomed a baby boy early this morning. Buckingham Palace confirmed the news this afternoon and said more details would be forthcoming over the next few days.

The couple have kept details of the pregnancy and birth closely guarded. Earlier this month, the couple confirmed that they would be keeping plans around the arrival of their baby private and eschewing the traditional post-baby photocall, much to the chagrin of the British tabloid press.

“Keeping the nation in the dark over details, even after the birth, is a bad look for the royal couple,” harrumphed The Sun. Won’t somebody think of the nation?

It would seem that the royal couple are committed to ensuring their child has as normal an upbringing as possible. “I am determined to have a relatively normal life, and if I am lucky enough to have children, they can have one too,” Prince Harry told Newsweek in 2017.

It’s a noble aim, but one that seems like a bit of a pipe dream when you consider that many leading media outlets are currently busy deciphering the significance of the baby’s zodiac sign.

“Smart, ambitious and slightly stubborn – Baby Sussex is a Taurus just like his great-grandmother the Queen and royal cousins Charlotte and Louis,” reads one headline today. The child is scarcely 12 hours old but a horoscope expert has already determined that the planetary alignment dictates that he will be “a Taurean with a maverick twist”.

Self-proclaimed experts commenting on your personality traits when you’re fresh out of the amniotic sac. That’s what normality looks like when you’re seventh in line to the throne.

The couple are not the first members of the royal family to speak of their desire to give their children a normal upbringing. Prince William previously told BBC News, “As far as we’re concerned, within our family unit we are a normal family.”

That may be true to a certain degree, but consider that there are multiple Instagram fan accounts dedicated to each of Prince William’s three young children and you might begin to suspect that this “normal upbringing” lark is a bit of a fool’s errand.

With all the will in the world, no child who grows up in a notoriously dysfunctional family funded by the taxpayer and is the subject of gushing and slightly deranged fan pages can ever have a truly normal upbringing. It’s not exactly trips to Trabolgan and 99s from Teddy’s, is it?

If the near-obsessive reporting on Meghan’s pregnancy is anything to go by, it seems likely that the newest royal baby might be subject to even more scrutiny than his young cousins. The papers have already devoted reams of column inches to discussing everything from his diet to his dual citizenship. Throw in the fact that he is the first interracial British monarch in recent history and it seems unlikely that the newest arrival will be able to avoid the glare of the media spotlight.

As he grows up, the royal baby can expect to have everything from his christening to his first day of school obsessively documented and commented upon. After all, being a royal is as much about performance as anything else, and the public expect a show. Rightly or wrongly, it’s part of the territory.

The couple’s desire for privacy and normality makes sense when you consider their contentious relationship with the press. In 2016, Prince Harry issued a statement condemning the media for subjecting his then girlfriend Meghan Markle to “a wave of abuse and harassment”.

He called out the “racial undertones of comment pieces” and “the outright sexism and racism of social media trolls and web article comments”.

The couple’s desire to shield their child from similar hostility is understandable. Whether it’s realistic is another matter entirely.