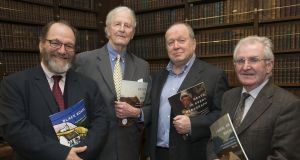 L Perry Curtis jnr, who died on April 9th, aged 86, was one of a small number of American scholars who have made a significant contribution to the study of Irish history.

His Apes and Angels (1971, revised edition 1997) is a classic, a study of the racial stereotyping of the Irish – frequently, their simianisation – in Victorian cartoons. This was a truly pioneering work. He later complemented it with a lavishly illustrated booklet on the female icon of Erin in both British and Irish cartoons, published by the National Library of Ireland in 2000.

Curtis’s other published work included Coercion and Conciliation in Ireland (1963), based on research for his doctorate at Oxford University, which remains the definitive account of British government policy in Ireland under Conservative administrations between 1885 and 1892 – also an innovative study, since most historians of Ireland in the late 19th century tend to focus on Gladstone and the Liberals.

His last major work was The Depiction of Eviction in Ireland, 1845-1910 (2011), in which he used a wide variety of prints, cartoons, photographs and paintings to capture a sense of the misery and cruelty of evictions.

Here too he was breaking new ground, and he was consciously responding to the criticism often made, particularly by those of an advanced nationalist persuasion, that much academic writing in Irish history ignores the trauma of our history.

While accepting the thrust of that criticism, Curtis nevertheless was of the “revisionist” school of Irish history and defended the more professional and scholarly approach to the study of history that that label connotes. In a strongly argued essay in the American journal Éire-Ireland in 1994, he wrote that “to mock [that approach] . . . is tantamount to inviting propagandists to fictionalize the past in the name of authentic history”. He added, more colourfully, that such history would simply validate “pub talk”.

He was definitely on the side of the Angels – and against the Apes – in the debates among Irish historians on “revisionism”.

He frequently visited Ireland, both for research purposes and for pleasure. He was a member of the Kildare Street and University Club for many years; it was “his home away from home” in Ireland, and he loved dining there with his Irish friends. He also loved our National Library, where he did so much of his research and which he once described as “Dublin’s liveliest, most inter-denominational and least pretentious centre of learning and good conversation”. In 2011, he gave the biennial RI Best Memorial Lecture in the National Library – to a capacity audience anxious to see and hear this legendary historian in person. In 2015, he addressed the Parnell Summer School on “Rethinking the Origins of the Land War in Ireland”.

Curtis’s last visit to Ireland in March 2018 was for opening of the Coming Home exhibition of art from the collection of the Ireland’s Great Hunger Museum at Quinnipiac University in Connecticut. He was thrilled on that occasion to meet President Higgins, for whose remarks at the opening ceremony in Dublin Castle he expressed great admiration.

Curtis was educated at Yale and at Oxford, and was professor emeritus of history at Brown University, Rhode Island. His 40-year teaching career also included appointments at Princeton and at the University of California at Berkeley. He retired from Brown in 2001 and had been living in rural Vermont since then. In addition to the publications already mentioned, another of his books worthy of note is Jack the Ripper and the London Press (2001).

He is survived by his wife Alison, a daughter of the last claimant to the MacCarthy Reagh chieftaincy, whom he met and married in Oxford, and by their son Michael and daughter Sarah. His many Irish friends will miss his wisdom, his scholarship and his irreverent, irrepressible wit. In accordance with his wishes, his body was cremated and the ashes will be scattered near the place where his elder brother disappeared in a mountaineering accident on Mont Blanc in 1957.