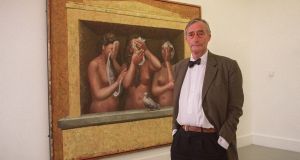 Artist Stephen McKenna: Asked by an interviewer in 1990 as to whether he considered himself English, Irish or European, he replied simply: “Yes.” Photograph: Moya Nolan 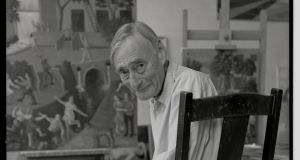 The painter Stephen McKenna, who died at his home in Bagenalstown, County Carlow last month aged 78, devoted most of his career to formulating a personal artistic response to the classical European tradition with its rich philosophical and mythological foundations, though he was uneasy about being labelled as a classical painter. In paintings, drawings, watercolours and prints, he applied himself to all of the established pictorial genres, including still life, the figure, interiors, landscape and history painting, with intelligence, wit and endless curiosity. He was an exceptionally good draughtsman and there is often a distinctly architectonic quality to his work. Life, reading, music, thought and work were indivisible to him. “The studio is my natural home,” he remarked once, and his studios, as documented in his paintings, were always havens of civilised contemplation as well as working spaces.

While he settled, very happily, in Bagenalstown late in the 1990s – his home on the Barrow was, he wrote “without doubt a vision of Arcadia” – he travelled a great deal and lived in many places. His habit of restlessness was instilled early on. He was born in Ashford, Middlesex. His father, from Co Tyrone, was in the British Army. His mother was Scottish. In the immediate postwar years, the family moved to Oslo, Hong Kong and Austria. When Stephen attended the Slade School of Art in London, he absorbed an abstract, modernist aesthetic. He did not take to the two emergent trends: pop art and conceptualism. Equally, the appeal of abstraction waned and he found himself slightly adrift as a representational painter: “Friends and colleagues thought I’d lost it.”

When he was offered a short stay in a studio in Germany in 1971 he accepted it without anything much in mind. To his surprise, he found a more receptive environment and stayed on. When his father retired to Co Donegal in 1973 he began to spend time there regularly. At the end of the decade he moved from Germany to Belgium and eventually to Italy. With the renewed popularity of painting at the end of the 1970s, he found his work in critical favour and in demand. He was uneasy about being fashionable, because he had no intention of changing. “I never learned to follow fashion,” he said looking back on this period. “But it’s better to stay where you ought to be rather than trying to.”

While in Germany, he became intrigued by the intense but ambivalent nature of north-south European relations – Germania and Italia – and that became a recurrent preoccupation in his work. Italia, from Roman and Etruscan art to the path mapped out by Carlo Carra in his text, Metaphysical Painting, helped to shape his way of seeing. Carra argued that painters could apply Renaissance methods to the contemporary world in all its complexity. Carra’s fellow painter, Giorgio de Chirico, was also an acknowledged influence, as was Giorgio Morandi, and the great classicists Claude and Poussin, among others. In Italy, McKenna lived with the Korean painter Chung Eun-Mo and produced many of his most beautiful and harmonious interiors and landscapes. Each interior is a world in itself or, as he said, two worlds: “a space, and the things in it.”

Not matter where he was living, he travelled, usually to European destinations. One of his more recent, and outstanding, series of paintings was based on European port cities, each of which he visited. Asked by an interviewer in 1990 as to whether he considered himself English, Irish or European, he replied simply: “Yes.” He was shortlisted for the Turner Prize in 1986. In 1997 he curated a major exhibition at the Irish Museum of Modern Art, The Pursuit of Painting, featuring the work of 26 painters, past and present, who were important to him. He was himself the subject of numerous shows at venues including, in Ireland, the RHA Gallagher Gallery, the Hugh Lane Gallery and the Douglas Hyde Gallery. He was represented by the Kerlin Gallery in Dublin and also exhibited at the Fenderesky Gallery in Belfast. Elected to Aosdána in 1999, he became a member of the RHA in 2002 and served as president of the RHA from 2005-2009.

He is survived by his wife Beth Ann, his son Sean, stepdaughter Beatrice, sister Susan, brothers James and Andrew, grandchildren and great grandchildren.