Nietzsche said that failure should be embraced. But he was weird

We learn our own resilience by taking a bashing. To fail is to surrender 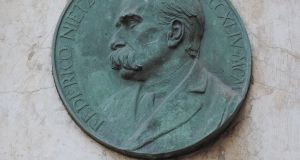 Commemorative plaque for Friedrich Nietzsche at the house where he lived in Turin. Photograph: istock

Nietzsche once famously wrote, in one of his notebooks and published in The Will to Power, that failure and pain are richly to be embraced, and even desired – “To those human beings who are of any concern to me I wish suffering, desolation, sickness, ill-treatment, indignities – I wish that they should not remain unfamiliar with profound self-contempt, the torture of self-mistrust, the wretchedness of the vanquished: I have no pity for them, because I wish them the only thing that can prove today whether one is worth anything or not – that one endures.”

The Will to Power is a little controversial among scholars of Nietzsche because it was compiled in large part from his notes by his sister Elisabeth and published after his death. The two did not have a good relationship and Elisabeth took what might be described as liberties with Nietzsche’s work. However, Nietzsche was undoubtedly one of the greatest philosophers ever to have lived, and far from an intellectual wallflower, he was positively egotistical.

Referring to other philosophers as “cabbage heads” he correctly (and annoyingly to some) predicted his own place in history while he was still busy writing it.

Nietzche was weird. Really weird. In some respects, if we were being unkind, we might even think of him as a failure

Like many of history’s sparkling minds, we have a tendency to think about someone as intellectually accomplished as Nietzsche as a clear success. We consider past figures and events without reference to the human nonsense of the everyday, in which we ourselves have to live. If you were to publicly refer to other people in your industry as “cabbage heads” and express ideologically unacceptable opinions for the time in which you live, you may also find yourself struggling a bit to find work.

Nietzsche was not as successful during his own lifetime as we might now think and, besides, like a lot of philosophers and contrarian thinkers, he was weird. Really weird. In some respects, if we were being unkind, we might even think of him as a failure.

He had little success with women (I blame the enormous moustache and fierce, threatening stare for at least part of that), his health constantly plagued him. He led an unsettled life for many years, travelling and struggling to work through bouts of illness.

He was lonely, personally and intellectually misunderstood; he fell out with his mother and sister, made some bad decisions, and wrote much of his searingly insightful and perspective-changing work in a world where not all that many people yet recognised it for what it was.

In his youth, Nietzsche fell for what he described as the “dismal genius” of Arthur Schopenhauer, one of history’s most pessimistic philosophers, who lived with a series of poodles the neighbourhood children rather ungenerously referred to as Mrs. Schopenhauer.

Schopenhauer counsels us to avoid pain rather than seek pleasure; to step out of the momentum of life, keep to ourselves (and our poodles) and accept the ultimate truth that fulfilment is illusory. There is more to Schopenhauer than that, so don’t allow that to put you off reading him if you haven’t yet, but the point is that Nietzsche later changed his mind. If fulfilment is possible, he argued, it is only reached by accepting pain as a necessary aspect of the route. It is not so much that “what doesn’t kill you makes you stronger”, but that whatever doesn’t kill you doesn’t kill you, so you might as well keep going.

To fail is to stop trying; to cease all momentum and just stay still while the world trundles on past us

Sometimes what we call failure refers not to a condition defined by the absence of success, but a state of mind characterised by a lack of caring. Failure, then, is the condition of permanent surrender to our circumstances – a total cessation of effort or investment. To fail is to stop trying; to cease all momentum and just stay still while the world trundles on past us.

“Failure” is not a label that others can ascribe to us, because only we know when we are finished. It is normal to feel finished from time to time, and to stop for a while, or to lack the energy to start again or to change direction when we still smart from the weeping tenderness from falling on our faces. However, the ability to withstand hardship is a learned skill, and we learn our own resilience by taking a bashing. To fail is to surrender.

Can’t get your beauty sleep? Here’s how to get a good night’s rest
Real news has value SUBSCRIBE