‘Women have freedom here in Ireland. They are not judged by their clothes’

New to the Parish: Suad Aldarra and Housam Ziad arrived from Syria, via Egypt, in 2014 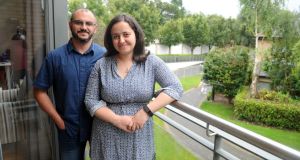 When Suad Aldarra was offered a job in Ireland in 2014 she was suddenly faced with the prospect of having to choose between her relationship and her career. The Syrian data scientist was initially eager to accept the position but then discovered that the modest salary would not allow her to bring her husband to Galway. “It was the hardest decision I ever made. We didn’t want to separate, especially after everything we went through to be together. With the war and his father’s death we’d never had a moment to ourselves. But we knew it was the safest option.”

Aldarra and her husband, Housam Ziad, had been living in Egypt when she secured the job in the west of Ireland. The couple had left their home in Damascus in late 2012, shortly after they got married, when the Syrian conflict began to spread. A month after arriving in Egypt they received word that Ziad’s father had been shot dead. His mother and sister later joined the newlyweds in their Egyptian home.

The couple had hoped to find work in Egypt, but when the country stopped issuing work visas in the wake of the military coup of 2013, they started to farther afield for employment.

I had always been different to the other women in my family. I was stubborn, and life didn’t suit me. Each day in Syria made me realise I didn’t want to go back to Saudi Arabia

“The stories of travelling across the sea were starting to emerge and I was desperate,” recalls Aldarra. “We had his mother and sister living with us in a one-bedroom apartment. It was so small, and everyone was sad after his father died. We couldn’t stay in Egypt so we started talking about going by sea to Europe. ”

Aldarra was born and grew up in Saudi Arabia. She moved to her parents’ native Damascus when she was 17, to go to university. Compared with the deeply religious, conservative Saudi society, where women must cover up and cannot leave home without a male guardian, Syria was an exciting new world. “I kept my headscarf but could wear different clothes and talk to boys in the university. It was more open than what I was used to; they didn’t have the separation of genders.

“I had always been different to the other women in my family. I was stubborn and found that life didn’t suit me. Each day in Syria made me realise I didn’t want to go back. For me, Syria during war was better than Saudi Arabia in peace.”

Aldarra met Ziad, an English-literature student who had grown up in the Yarmouk Palestinian refugee camp in Damascus, in 2006. Even though Ziad was born in Syria, and his mother came from a Syrian background, he was still considered a refugee by the Syrian government because his paternal grandfather had arrived from Palestine in 1948. Ziad had dropped out of school aged 16 because his family could not afford his education, but he had gone on to become a web designer before returning to his studies.

When Aldarra arrived in Ireland in January 2014, she immediately started to gather the paperwork to bring her husband over. The couple were reunited three months later, and Ziad went on to find a job as a computer programmer at NUI Galway. They now live in Dublin with their two-year-old son, Keenan.

Aldarra, who worked with Unicef from 2016, took a break from her job to study for a part-time master’s degree in data analytics while caring for her newborn son. She recently received an international award for her online data project tracking the rise of xenophobia across media coverage of the refugee crisis and is a finalist in the upcoming DataSci awards. Ziad is working as a principal software engineer with a large tech company, and the family recently moved into an apartment not far from the sea in north Dublin.

They are happy in Ireland, and appreciate the welcome they’ve received, but have encountered many barriers in setting up a life here.

We work, we pay taxes, but we get all the negative stereotypes of refugees, with no access to help. We are always treated as a liability because we are Syrians

“I would say being a Syrian but not a refugee is the main bottleneck,” says Aldarra. “We work, we pay taxes but we get all the negative stereotypes of refugees, with no access to help. We are always treated as a liability because we are Syrians. I wish we could have the rights of normal economic migrants and bring our families here to visit.”

As the family came to Ireland as researchers and not refugees they must rely on their Syrian documents for travel outside of Ireland. As a result, they frequently have to apply for visas for work and to travel abroad.

Aldarra applied for Irish citizenship in February of this year, and Ziad followed two months later. Her passport was returned within 10 days, and she has now reached the second stage of the process, but Ziad’s passport was held for 92 days. “We are lucky to live in Ireland but the visa situation is making us feel frustrated, isolated and alone,” she says. “The day we hopefully get Irish passports will literally be life-changing for us.”

Despite these delays and setbacks, the couple describe their lives in Ireland so far as an “amazing journey”.

“The first day here I could feel how peaceful it was, and I think we’ve had a lot of opportunities in Ireland,” says Zaid, who has developed a love of Celtic culture and is learning Irish.

Aldarra, who stopped wearing her headscarf in 2015, says she finally feels comfortable as a woman. “A while after we came here I started having all these questions in my mind. I was convinced the headscarf was important for women but when I came here I noticed the freedom women had and that they were not judged by their clothes. I can enjoy thinking and becoming who I really want here.”

She also believes Irish people have a deeper understanding of the Syrian war given the island’s recent history of the Northern Ireland conflict. “When I hear about the Troubles it gives me hope that Syria might one day be peaceful like it is in Ireland. If Syria could even have a bit of the peace we have here that would be amazing. I haven’t seen any other European country that really understands the war situation.”