‘My son wants to leave Ireland for good. He’s not comfortable with what’s going on here’

Oghenetano John Uwhumiakpor, who arrived from Nigeria, via Finland, in 2006, says Irish-born black teenagers are ‘suffering an identity crisis’ 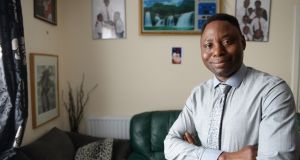 Oghenetano John Uwhumiakpor: “My 16-year-old son is keen to leave this country; not to study but to go and live abroad for good. He’s not really comfortable with what’s going on here.” Photograph: Dara Mac Dónaill

Oghenetano John Uwhumiakpor was in his late teens when his sister underwent female genital mutilation (FGM). He recalls overhearing as a young child that his older sister would have to go through the cutting procedure ahead of her wedding day but was too young to understand the lifelong implications on her health and wellbeing. However, when the time came for his next sister to be cut, he knew exactly how dangerous the procedure could be.

“I was a very inquisitive child when I witnessed it first; I wanted to know what was going on. We were very close in my family so I could hear people talking. I can remember my sister walking out with two women holding her hands and blood coming down her legs.

“I knew it was wrong. I kept asking why is this happening but they told me to go away, said I couldn’t understand. But I could see the pain in her face. This was not something she got an anaesthetic for. This was something I didn’t want to stand of, a cultural belief I couldn’t agree with. I said to myself in that moment I don’t think my wife should ever do this.”

One of 15 children, Uwhumiakpor grew up in the southern Nigeria’s Edo State and moved to Benin in his early 20s to find work. Shortly before leaving, he met and fell in love with Bridget. Unlike in other cultures where FGM is performed on young children, in Uwhumiakpor’s community the ritual was carried out just before a woman was married. Fearing for her safety, Bridget, who was pregnant with the couple’s first child, decided to seek asylum abroad and travelled to Ireland.

Determined to follow her, Uwhumiakpor eventually made arrangements to fly to Europe but mistakenly ended up in Finland. He spent a year in a Finnish asylum centre before finding a way to Ireland in 2006. He spent three months in the Mosney direct provision centre but after explaining his situation to immigration authorities, was allowed to move in with Bridget, who had already secured permission to remain in Ireland through her son’s Irish nationality (he was born before the 2004 citizenship referendum). Two years later, Uwhumiakpor was also given permission to remain in the country.

While he only spent a short period in the direct provision system, Uwhumiakpor still recalls the frustration of waiting for news on his asylum application. “Direct provision is not humane; it’s not good for any human being because it takes your sense of direction and your sense of focus. It has nothing to do with human dignity. If you imagine a scenario when someone is locked up unjustly, you can’t quantify how that person’s mental state will be affected.”

Uwhumiakpor and his wife have now spent more than a decade living in Balbriggan and have six children aged between 18 months and 16 years of age. He works as a home carer but says he would like to move into social care and use his studies in psychology to help people dealing with drug addiction or domestic abuse.

Uwhumiakpor has also acted as general secretary of the Balbriggan Integration Forum for seven years, a group he helped form in 2013 to promote integration in the north Fingal community. “The narrative today in Ireland is that Balbriggan is one of the most diverse communities in the country. And if the issue of integration is not looked into, it’s going to be one of those things that comes back to hurt the community in the future.”

Aside from Balbriggan’s African community – which includes people from Nigeria, Somalia, Angola, Eritrea, the Democratic Republic of Congo, Ethiopia and the Ivory Coast – there is also a large number of eastern Europeans living alongside Irish families who have been in the area for decades.

“If they live in segregation that is not a way to bring social community together. There’s so much to be done in terms of social inclusion in our community. People see it as political but it should not be politicised. You can’t just pay lip service. It has to come from the heart.”

Uwhumiakpor is worried about young black people’s sense of belonging in this country and believes many Irish-born teenagers of colour are “suffering an identity crisis”. “My 16-year-old son is keen to leave this country; not to study but to go and live abroad for good. He’s not really comfortable with what’s going on here but I’m trying to see how we can change that.”

Uwhumiakpor is calling for the establishment of a cultural centre in Balbriggan to help young people find their roots while embracing their family background. “People have told me that when they go back to Nigeria on holidays their children ask their parents ‘when are we going home’ and they mean Ireland. Nigeria is not their home. But when they come back here they are not treated as if this is their home.”

In May 2019, Uwhumiakpor ran as a People Before Profit candidate for Balbriggan in the local elections. While he only secured 263 first-preference votes, he is glad he took part in the campaign.

“And the way people received me was beyond my imagination. They gave me the belief that I live in a very positive community. So it wasn’t a question about winning, it’s about understanding.”

Asked if he would run for the council again, Uwhumiakpor immediately affirms that he would. He also plans to remain a member of People Before Profit, which he describes as a political movement with the “common man at heart”. “Irrespective of your creed or colour, they stand for everyone. That’s my passion, humanity. Standing up for people is what gives me the energy to do what I’m doing.”