‘The wait for papers is stressful. I couldn’t work. My life had to stop’

New to the Parish: Mandla Ncube arrived from Zimbabwe in 2016 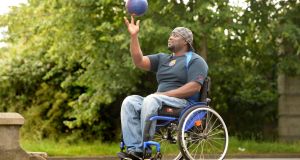 Mandla Ncube never played basketball before he came to Ireland. Before his accident he loved football and often played with friends near his home in the city of Bulawayo in Zimbabwe. But after he fell from a window he presumed he would never play sport again.

A member of the LGBT+ community, Ncube had been taking part in protests for gay rights when the police turned up at his apartment one afternoon in 2014. Ncube, who is bisexual, was tired of hiding his sexuality and wanted to see change in the country.

“It’s not easy to go about with your partner in public. People would see you together and call the police. Even if someone just suspects you, the police can investigate and if they find out you are gay you could go to jail. Being gay in Zimbabwe is an abomination.”

'I was with traditional healers so they had their own training. It was hard for me in my condition because I needed lots of attention but they used leaves of the trees'

It was for this reason that Ncube rushed to the balcony when he realised the authorities were at his door. He was two storeys up but decided to take the risk and jumped.

“The injury is at the tail of my spine,” he says, gesturing towards his lower back as he twists around in his chair. His legs have not moved since he jumped from the balcony and he now uses a wheelchair.

Ncube spent the six months following the accident in hospital where he says he was under police surveillance. “Those first few months it was really stressful. Even my mum was worried about me, I wasn’t smiling and I was always quiet.”

His childhood friend eventually decided to get Ncube away from the authorities. He snuck him out of the hospital and drove him deep into the Zimbabwean countryside to a small community where Ncube’s injuries were treated using local medicine. “I was with traditional healers so they had their own training. It was hard for me in my condition because I needed lots of attention but they used leaves of the trees, it was a natural remedy and it helped with the pain. I was having so much pain along my back. I couldn’t do anything on my own.”

On the advice of his friend, Ncube was put in touch with an agent who arranged for him to get out of Zimbabwe and travel to Europe. It was recommended he should claim asylum in Ireland where he could get treatment for his back.

Ncube arrived in Dublin in April 2016 and was brought to the Balseskin direct-provision centre where he spent the following six months. After meeting the doctor at the centre he was referred on to the Mater Hospital and received treatment for his back and a painful kidney infection. He was then transferred to the Clondalkin Towers direct-provision centre where he shared a room with a man from Zimbabwe. “It was a lot easier for me when I got to Clondalkin because of that guy. We could talk and he had come here for the same issue as me so we could understand each other.”

Two months later he began treatment at the National Rehabilitation Hospital in Dún Laoghaire. Aside from the pain in his back, Ncube was also struggling with continence issues as a result of the injury. “Even my bladder was leaking out, it was all connected. They gave me medication to tighten my bladder and took me to the urologist to check the situation properly.”

'I met guys through basketball with my condition. They are married and happy and I could understand that you can still live your life even if you are in a wheelchair'

Ncube missed using his legs and often attempted to stand and walk with the use of crutches. However, with no power in his legs he ended up injuring his upper arms from the pressure. “When you sit for a long time you get spasms so I wanted to try and stand up. I tried to shuffle with my legs but they were not working. The doctors tell me I mustn’t stand up for a long time, that I must sit down.”

While undergoing his treatment in Dún Laoghaire, Ncube was introduced to a man called Mark Barry, a sports development officer from the Irish Wheelchair Association who suggested he try playing basketball. With no experience of the sport, even with the use of his legs, Ncube struggled to get a hang of the game at first. However, with time he discovered a real passion for the sport.

“It helped because I met guys through basketball with my condition. They are married and happy and I could understand that you can still live your life even if you are in a wheelchair. They are driving cars and I dream one day that I can take lessons and drive and live a life here.”

Ncube went on to participate in the annual National Rehabilitation Hospital spinal sports championships, and joined the Ballybrack Bulls wheelchair basketball club. He also joined the Outhouse LGBT+ community centre where he attends meetings once a month.

In October 2018 he received word that his application for asylum had been accepted, but soon after discovered his papers would be delayed because of a misspelling in his name and a mistake in his nationality. He had to wait another eight months before the final refugee status came through.

'I’ve accepted being in a wheelchair, I know how to live my life now with my condition. I can live on my own now, I can do anything on my own'

“It was frustrating because I’d seen people move out of the centre and into their own homes but I was stuck in there. That wait for your papers is very stressful, I even got a bit depressed. I couldn’t work, my life just had to stop from the day I came here.”

Ncube is looking forward to moving out of the Clondalkin centre and hopes to find a place to live in Dublin. Having recently completed a course in office administration, he’s also hoping to find a job. “I’m feeling relieved and happy even though I’m still searching for a house. The fact that I can finally have my own place makes me feel good. I think Dublin will be easier for me with my mobility. If I move outside the city it will be hard, the buses don’t really have the ramp.”

He feels the rehabilitation and support he’s received since coming to Ireland has given him a new lease of life. “I’ve accepted being in a wheelchair, I know how to live my life now with my condition. I can live on my own now, I can do anything on my own.”

‘Tralee felt friendlier than Killarney. We discovered a different welcome there’
9