‘Racism is real in Ireland. Our history does not make us immune’

New to the Parish: Law lecturer Thamil Ananthavinayagan arrived from Germany in 2013 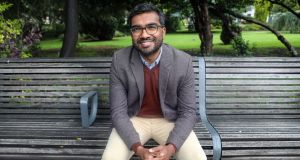 Dr Thamil Ananthavinayagan:‘Everything I am is today is because of my parents’. Photograph: Crispin Rodwell//The Irish Times

Before Thamil Ananthavinayagan was offered a position as a PhD researcher at the Irish Centre for Human Rights in Galway, he had never been to Ireland. Nevertheless, the German student immediately felt drawn to this small island on the fringes of western Europe when he was offered the chance to move here in 2013.

“Everything I am is today is because of my parents but particularly because of my dad. He always spoke highly of Ireland and drew parallels between the Irish struggle against the British and the Tamil struggle (for independence from Sri Lanka’s Sinhalese majority ethnic group). He said our solidarity as oppressed communities united the Irish and the Tamils. I felt drawn to Ireland. It’s also the same size of Sri Lanka with a similar history of British colonialism.”

Ananthavinayagan’s father – a “politician, statesman and revolutionary for the Tamil liberation movement” – spent seven years in prison in his home country before being released with the help of Amnesty International. Fearing his safety, he fled Sri Lanka and travelled to Germany in 1981 seeking political asylum. His wife followed him the following year and in 1983, Ananthavinayagan was born in the former German capital of Bonn.

Ananthavinayagan’s father, who died in 2003, played a central role in his son’s life. He rarely spoke of his past but Ananthavinayagan pieced the details together as he grew older. “I knew that my dad was very important by the level of admiration people showed him. I also learned about the privileges that he and my mum once had. I often asked ‘why did you give that all up? Why did you fight against a caste system that ensured privilege for you?’”

Ananthavinayagan says his father’s response to this question paved the way for his future career in law.

“He told me that there are certain moments in life when you have to do the right thing and if you see oppression, you must stand up. Anything else would be complicity. That will stay with me forever.”

After finishing school in Bonn, Ananthavinayagan moved to the city of Marburg to study law. In 2003, when American forces invaded Iraq, he decided to join Germany’s Social Democratic Party. “I was against the war and the SDP opposed the intervention. I thought that was how I would symbolise my solidarity. But when my father learned that I’d joined the SDP, he wasn’t overjoyed. He said politics had ruined his life. I tried explaining that German politics were not as bad as Sri Lanka but he warned that politics corrupts. He never changed that attitude.”

After completing his studies, Ananthavinayagan worked as a junior lawyer for the tenants’ association before moving to the Netherlands to study for a master’s degree at the University of Maastricht in 2012. It was during this period that he decided to pursue a career in academia and applied for a PhD research position under the prominent human rights lawyer and professor Michael O’Flaherty at the Irish Centre for Human Rights in NUI Galway.

Despite his knowledge of the country’s historical parallels with his parents’ homeland, Ananthavinayagan knew very little about 21st century Ireland. He arrived into Shannon airport in October 2013 with groceries his uncle in London insisted he take while he was transiting through the UK. “He told me everything will be closed in Ireland on a Sunday because it’s a Catholic country, you need to bring food.”

The taxi driver who brought him from Galway bus station to his new apartment quickly clarified the situation and explained that all shops remained open on Sundays. While driving through the city, she stopped the car outside a Centra and re-emerged with a bag filled with flour, eggs, milk and other essentials. When they arrived at Ananthavinayagan’s destination she would not accept payment for the trip and handed him the Centra bag.

“That was my first encounter with Ireland and I was amazed. All I could think about was what my dad said about our common experience of oppression; I immediately felt a connection with the Irish people.”

This sense of belonging continued throughout the four years Ananthavinayagan spent living and working in the west of Ireland. The first blow to this sense of comfort came shortly before he moved to Dublin in 2017. Returning home late one night, he was walking through Galway city centre when three white men shouted from outside a kebab shop “‘hey boy, what have you got in your bag, is it a bomb? Are you from Isis?’”.

“I told myself they were drunk and didn’t engage with them, but I couldn’t sleep when I got home and the following days were ruined. I was very upset and the picture I’d had of Galway was slightly tainted.”

There is a lack of diversity throughout Irish ranks whether it be in politics, academics or the media

Despite only experienced racism this one time in Galway, racial abuse became a weekly occurrence when the academic moved to the capital to work as a lecturer in international law at Griffith College.

Ananthavinayagan recalls how he was called “Paki” and “n****r” by young people on the streets. These experiences “significantly contaminated” his relationship with this country, he admits.

“These incidents have impacted how I see this country. Racism is real here and always invoking Ireland’s history does not make us immune to racism.”

The recent protests in response to the killing of George Floyd, and the emergence of a growing black lives matter movement in this country, is just the first step in the long process of coming to term with racial biases, says Ananthavinayagan

“There is a lack of diversity throughout Irish ranks whether it be in politics, academics or the media. I want to see real representation but I’m concerned there won’t be a meaningful impact. We don’t just need cosmetic changes, we need changes that go down to the roots of society. We’ve had these moments in the past where incidents happen and then we return to the status quo. Just think of the Paris banlieues riots (in 2005); there was so much discussion about inclusion and then nothing really changed. We say these are watershed moments but then nothing really happens.”

Asking a person of colour to write a column in a newspaper about race is not enough, he adds. They should be commenting on their area of expertise whether that be in science, music, business or politics. “My expertise is much larger than race issues and this is something I need to amplify; that BAME (Black, Asian and minority ethnic) people have much more to offer than the racist experience and narrative.”