New to the Parish: Patrycja Jurkowska arrived from Poland in 2004 and again in 2005 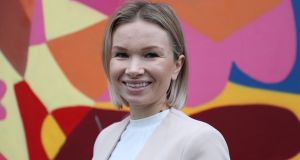 ‘I decided to do as much as I could to help her and secure a better life for my family.’ Photograph Nick Bradshaw/The Irish Times

When Patrycja Jurkowska was eight years old she decided to turn her life around. She had watched her mother working three jobs - as a hairdresser, housekeeper and on a farm - to make ends meet and knew the other parents and children at school looked down on her family.

“When you were the child of a single mother, or you came from working class, you were seen as a lesser person. It felt so unfair; I couldn’t understand as a small child why I had to do so much more than my peers. In Poland the benefits for single mums were limited. We may not have had the same clothes or travels as my classmates but I could see she was really doing her best.

“I decided to do as much as I could to help her and secure a better life for my family. Instead of saying ‘oh my God, we’re so poor and life is unfair’, I realised the only way to become better is to get us out of this. So I worked with her towards the common goal of providing for our family and trying to make a change in our life.”

The eldest of three girls, Jurkowska often cared for her sisters when her mother was working. She studied hard and scored top marks at school. “Even thought I was the best student I was still seen as a worse person because of the background I was coming from. It was that traditional view that you have to behave in a certain way and follow a certain route.”

On her 18th birthday, Jurkowska’s mother surprised her daughter with flight tickets to Ireland for the summer to work as an au pair. “She knew how much I loved languages and asked if I’d like to travel abroad to practice my English. Of course it was the best present ever. I didn’t think she could afford it but somehow she got the money together.”

With the help of a Polish agency, Jurkowksa secured an au pair position with an Irish family living in Westmeath and boarded a flight for the first time in her life in June 2004. She spent the following three months looking after the family’s young son.

“It was in the middle of nowhere so there wasn’t much happening but the family were so lovely to me. Their son had ADHD and couldn’t really speak proper English but neither could I so it was a bit challenging for the first few weeks. But once we spent time together you could see him developing and by the end of the summer he was speaking a lot better.”

For the first time in her life, Jurkowska no longer felt like an outsider. “I had very limited spoken English and when I arrived I was afraid to speak but the family really helped me overcome that. People were so open to me and really made me feel like I belonged, more than back home where I had lived for 18 years. There was a real acceptance and openness. They saw my potential even thought they knew very little about me.”

She returned to Poland determined to find a way back to Ireland. She completed her final year of school before buying a one-way ticket to Dublin with a plan to spend a year in the country before university. “Even if I stayed in Poland I’d still have to provide for myself because my family couldn’t support me. I decided I’d go to Ireland, enjoy the company of the people I met there, practice my English, earn some money and go back to Poland to study.”

'I knew once they landed here and experienced the country they would want to stay. I just had to help them take that first step'

Jurkowska’s Westmeath family helped her settle and find a job as a waitress. Once 12 months had passed Jurkowska decided to stay another year. She also started considering whether she could bring her mother and sisters to join her. “Obviously they had their whole life in Poland and didn’t speak any English but they needed a change. I knew once they landed here and experienced the country they would want to stay. I just had to help them take that first step.”

In 2007 Jurkowska bought tickets for her family to spend two weeks in Ireland. Before the fortnight was up, her mother had decided to stay. She found a job with a housekeeping agency within a week and the two younger sisters started school. “It was a massive undertaking and a huge responsibility, particularly because for quite some time I was the key breadwinner so instead of working 40 hours a week I was working 70. But since I was eight I had wanted to change my family’s life and this was the opportunity to do that.”

For the first few weeks Jurkowska acted as a translator between her mother and the agency boss while each evening she did English language lessons with her sisters. “Definitely the first six months were tough because there was so much change going on. But we got huge support from the community that helped us through.”

I am definitely still Polish, I was born in Poland and I’m proud of it. But I do feel more at home here

Jurkowska spent three years supporting her family before applying to study office management at Athlone Institute of Technology. After two years, following encouragement from her lecturers, she transferred to an accounting course and graduated in 2014 with a master of arts. Soon after, she started working with Deloitte while studying in the evenings and at the weekends for her accountancy exams and in 2017 qualified as a chartered accountant.

She spent a year working in finance at a software company before joining the Goal Global charity as an operations accountant – a job which has brought her to Haiti and Honduras over the past year.

“I’ve always wanted a job where I can wake up in the morning and be really excited about what I do and that’s exactly how I’ve felt over the past year. Definitely there are days when it’s stressful but when you meet the people you impact through your work, it makes a huge difference.”

Jurkowska, who is currently the president of Junior Chamber International charity, now lives in Dún Laoghaire with her boyfriend while her sisters and mother still live in Mullingar.

“Sometimes I look back and I can’t believe how much has changed in my life. I feel I’ve achieved a lot and definitely found a place where I feel I belong. I am definitely still Polish, I was born in Poland and I’m proud of it. But I do feel more at home here.”

Patrycja Jurkowska will travel to London later this month to represent Chartered Accountants Ireland at the One Young World global summit for future young leaders.