‘I was weak and lost all my hair. My one wish was to see my daughter before I died’

New to the Parish: Ghaythaa Abdualdahab arrived in Ireland from Syria, via Greece, in 2018 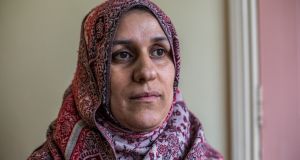 Ghaythaa Abdualdahab in Mosney Provision Centre in Co Louth: “What I want now is for my children to learn the language and integrate into Irish society.” Photograph: James Forde

Ghaythaa Abdualdahab first began feeling physically unwell when she heard her daughter’s husband had been killed. Even before his death she was desperately worried about her daughter’s safety living in Syria’s northern province of Idlib.

“Every time we spoke to each other I felt more and more pain being so far away from her. Then this year there was a big air strike where she lived in June and we lost connection for 24 hours. I thought she was dead and felt so much pressure on my body. I felt faint and weak. Then I discovered the lump near my neck.”

Abdualdahab arrived in Ireland from Greece with her husband and six of her eight children in March 2018. The family had left their home in Idlib in 2015 and travelled to Turkey where, like so many hundreds of thousands before them, they paid to take a boat across the Aegean Sea to European shores.

Abdualdahab felt terrified for her children’s safety as they made the two-hour crossing to the Greek island of Chios but believed Europe was the only safe option. “Every time I felt like going back I’d remind myself of the war, the air strikes and the shelling and tell myself ‘you have to continue, you cannot go back’.”

After a few days on Chios, the family travelled to Athens where they spent two months living in a small tent in the city’s port area, a period Abdualdahab says was “indescribable”. “We were exposed to the rain and the cold and there were snakes and scorpions all around us. When we took the boat across the sea we didn’t have to swim, but in Athens, when we were living in that tent, we nearly drowned. We would wake up with water all around us and have to swim out.”

Abdualdahab urged her children not to lose hope in spite of the horrors they had witnessed in Syria and the dreadful living conditions in Greece. “I reminded them that we Syrians are used to struggles and used to fighting. We are used to a hard life and we can rise up again.”

The family was eventually given a temporary home in Athens where they lived until 2018 when they were relocated to Ireland under the Irish Government’s refugee protection programme (IRPP). Abdualdahab and her husband arrived in Ireland with her six children, including a baby boy who was born in Greece. Their eldest son was already living in Germany. However, their daughter Natalya was still alone in Idlib.

“When we were in Greece it still felt like we were somehow connected to Natalya, Syria wasn’t that far away geographically,” explains Abdualdahab through a translator. “But the big shock came when we were on the plane to Ireland. Suddenly I realised this was the end, that I wouldn’t see my daughter again. We had oceans and seas between us, the distance was too big.”

The family was sent to the Mosney direct provision centre while they awaited longer-term housing. Soon after, Abdualdahab discovered the lump on her body. She contacted the centre’s doctor and was sent to the Our Lady of Lourdes Hospital in Drogheda where she was diagnosed with lung cancer. By September 2018 she was in Dublin’s Beaumont Hospital undergoing chemotherapy.

“I felt like I was going to die. But the hospital was extremely co-operative and played a really positive role in my treatment. And the Department of Justice was very helpful, they provided a car every day to bring me to the hospital for treatment.”

As the treatment progressed, and Abdualdahab grew closer to the Government officials who dropped in to visit, she began speaking about her daughter in Syria. “They realised the core of my problem was being away from daughter so they asked if she could travel to Beirut. They said if she got there, it would be easier to get her to Ireland.”

“I was so weak, I had lost all my hair due to the treatment. I told them I only had one wish: to see my daughter before I died.”

In October 2018, on the advice of her parents and Department of Justice officials, Natalya set off for Lebanon. “It wasn’t easy to get there,” recalls Natalya. “The road was extremely dangerous and I had my two young children with me. Once you reach the border you need money, proof of hotel reservations and all your documentation. My husband had been my only hope left in life and when he died it was the worst thing ever. I wanted to die with him. We were all alone.”

Luckily, Natalya and her two children made it to Beirut and sent their documentation to the Department of Justice who made the arrangements for family reunification. Just 15 days later, the young family boarded a flight to Dublin.

“It was a miracle,” says her mother with tears in her eyes. “I was still in hospital when I got the call that she was coming. They told me they had found a house for her in Mosney next to us. After that the change in my health was radical, I immediately started to improve.”

Three months on, Abdualdahab is making a slow but steady recovery. Five of her children are attending the local school in Drogheda and her husband recently found work at a factory in Balbriggan. Natalya is also settling into her new life in Ireland.

Abdualdahab says no member of her family ever wants to return to Syria. “There is no reason to go back to that death and darkness. There were air strikes on a daily basis and I would collect the children and hide under the stairs. Every day we saw death in front of us.

How do I convince my wife that I’d be a great stay-at-home dad?
10

‘Did I miss anything?’ A modern Rip Van Winkle emerges, blinking, into lockdown
Real news has value SUBSCRIBE