My mum's smoking ban: she could smell cigarettes at 100 paces

Family Fortunes: But what was really surprising was what the nun told us 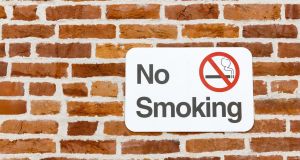 My mother was proud that none of her children ever smoked in her house. Photograph: iStock/Getty

My mother issued a smoking ban in our house when my eldest brother, Liam, was young. When he got off the bus, returning from an under-14 football match, she could smell the smoke from 100 paces. The minute she got him home she turned on him.

“Tell me the truth now, cos I’ll find out. Do you smoke?”

“There’s no need to swear. That’s good to hear. I know you’ll never take them up again so,” she said. And, to the best of my knowledge, he never did.

My older sister, Aileen, was next to try them out. She arranged with two of her friends in sixth class to meet down one of the laneways to have a smoke on their way home from school. They saved until they had enough money to buy a packet of 10. Aileen went into a small newsagent’s in town.

“No problem. Is that all? Any milk or bread?” he said, acting totally normally, according to Aileen’s account afterwards.

As soon as she left the shop he rang our pharmacy. He called, he said, just to check if my mother had taken up the smokes recently. When she answered that she hadn’t, he said: “Well, I’m just letting you know that Aileen bought 10 cigarettes for you a while ago. I’ll be happy to take them back, of course, if they’re still sealed.”

When Aileen arrived home there was a seize-and-search operation on her school bag. The open packet, with seven cigarettes inside, was ceremoniously thrown into the range. It was a long time before she got any more pocket money.

I decided to wait until I got to boarding school to give the fags a twirl. I reckoned the reach of my mother’s law wouldn’t get that far. We were allowed to walk up the village in Rosscarbery at weekends, and an older brother of one of our classmates was persuaded to buy us a packet of Consulate. They were, apparently, as cool as a mountain stream – and we were very cool! He bought a packet of Benson & Hedges.

“There’s no way I was going to make a show of myself by buying Consulate,” he told us.

Later, after study, we climbed out of a window at the end of the boarding corridor, ducked down behind a wall and lit up. I hated the throat-grating effect but, naturally, didn’t let on to the others.

It became a regular event. Four of us went in and out of the window two or three times a week during second and third year. I never smoked at home during the holidays, and never really enjoyed the sensation of smoking, but I loved the adventure and the camaraderie.

Now, girls, I don’t want you climbing in and out of that window any more. One of you will get hurt one of these nights

When we returned to school in September to begin fifth year, the very wise and kindly nun in charge of the boarding school called the four of us together.

“Now, girls, I don’t want you climbing in and out of that window any more. One of you will get hurt one of these nights. Instead, after study, you can go down to the cookery room and smoke down there for 10 minutes before lights out. Just make sure you leave a small window open when you’re leaving.” Then she ushered us out of her office.

My late mother was proud that none of her children ever smoked in her house and was even prouder when the government extended her anti-smoking ban nationwide, in March 2004.