Jennifer O’Connell: We’d the bags packed, fridge emptied, Taytos bought for the brother in the US 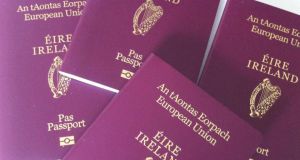 Passport problem: our holiday flight leaving in 27 hours, and I had the broadest rictus grin since Leo met Justin plastered on my face. Photograph: Bryan O’Brien

The absolute nicest, most polite people in Ireland are to be found in the queue at the passport office in Dublin. Everyone who steps inside that building on Mount Street, clutching their sheaf of papers and their freshly printed photos – not more than six months old; full frontal view; no hairbands; a neutral, if somewhat strained, expression – is beaming, bursting with love for their fellow human. Or at least the fellow human on the other side of the glass, in whose hands the fate of their imminent travel plans lies.

I only just noticed it was out of date, they all say incredulously. Only when the woman at the check-in desk pointed it out to me. I’d the bags all packed/the fridge emptied/the Taytos bought for the brother in the US. Can you imagine?

I’d say the person on the other side of the glass can well imagine, as they hear versions of the same thing 20 times a day. Still, I was taking no chances.

So here we were at the passport office: two people trying to simultaneously exude fury to one another and likability to everyone else

The flight due to take us on our belated family summer holiday – which had been postponed repeatedly, due to our being constitutionally unable to do anything so prosaic as actually book one – was leaving in 27 hours, and I had the broadest rictus grin since Leo met Justin plastered on my face.

We didn’t panic when we discovered that the small girl’s passport was out of date. Course we didn’t. We’re Irish. There were two and a bit weeks to go. Loads of time, we decided with our customary laid-back approach to all matters domestic admin related. We duly filled in the forms, got the photos taken and signed by a lovely young guard, and sent the lot off via Passport Express, delighted with ourselves. Unfortunately, it turns out that Passport Express in the run-up to Brexit is actually Passport Roughly Three Weeks.

So here we were: two people trying to simultaneously exude fury to one another and likability to everyone else. And one small, blithely unconcerned girl, eating Silvermints and getting into holiday mode. What do they talk in Dublin, she wanted to know. Can we go to the beach now? How do you say “beach” in Dublin?

The man ahead of us in the queue was giving the woman behind the glass the obligatory I-only-just-noticed spiel. It’s only six days out of date, he was saying incredulously. As he spoke his two little boys ran around the waiting area, shrieking. I never realised, he repeated. Six days. Can you believe it?

I can, she said, with the air of one who long ago suspended her disbelief at our national propensity for cutting things fine. It happens. And sure look, nobody died.

My father, he went on. My father is 75 and very sick. We were going to see him in France. When the woman at the airport said it was out of date I felt like the whole airport was closing in on top of me.

I know, I know, she said. We’ll get you going tomorrow.

Well now, he said, a crack opening in his voice. How kind you are, he said. And Ireland. Ireland is just wonderful. He didn’t think this would be possible in any other country, he really didn’t. A passport on the same day. He blew his nose. When he recovered he admitted that in fact his father was okay. It was just a little accident. Not actually that bad. He’s quite well, all things considered, for 75.

Thank you, he said and, in the ultimate mark of respect, switched to the vernacular. Tankin yew.

By the time we got home the boy was looking like he shouldn’t be going anywhere. A few hours later we woke up to the sound of a child throwing up Silvermints

Then it was our turn. I launched into it, how it was our own fault. I know, I know, she said.

It turned out we were lucky. They had changed the procedure that very week. If you’d come in on Monday she wouldn’t have been able to stop the Passport Express application, and there would have been nothing she could do for us, she said. So against all odds we got the passport, as the husband implied he’d always known we would.

And then our luck ran out. By the time we got home, the boy, who had been battling a suspiciously flu-like illness for days, was looking like he shouldn’t be going anywhere. A few hours later we woke up to the unmistakable sound of a small child throwing up Silvermints. A few hours after that the third child had succumbed.

So we missed the flight after all. We holidayed on the couch. Those of us who were well enough ate spaghetti carbonara and drank Amarone or flat 7Up, and pretended we were in Italy. When the days of frenzied, eviscerating illness abated we left the house that smelled of Dettol and disappointment and walked on the Greenway. We threw stones in the still, grey Suir, and temporarily forgot to blame each other for the lapsed passport. And although there were no jagged mountain ranges, no medieval towns clinging to hillsides, no chaotic markets filled with foreign voices and the smell of fruit and leather, there was sun on our faces, and the children were laughing. And sure look, nobody died.

Coronavirus anxiety keeping you awake? Here’s how to get more sleep
10