Remembering the Duchess of Westminster, my dad and their hunting days in Cork

Family Fortunes: The Duchess graciously presented the cup to us after the race and she was kindness itself 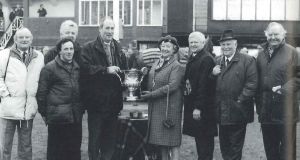 On the 6th of February 1993, our racing syndicate from Cork made the long trip to Fairyhouse racecourse to run a horse we owned, “Inch Lady”, in a steeplechase commemorating the great horse trainer, Tom Dreaper. Tom trained many great racehorses but “Arkle”, winner of the Cheltenham Gold Cup three times, was the most famous. “Arkle’s” owner was The Duchess of Westminster.

The Duchess was present at Fairyhouse that day. She had a horse called Balda Boy in the same race trained by Tom Dreaper’s son, Jim. The plan was that Balda Boy would win the race and Jim would present the cup to her. As it happened “Inch lady” won an exciting race beating “Balda Boy” into second place. The Duchess graciously presented the cup to us after the race and she was kindness itself.

Sometime later I was telling my mum the story of the race and immediately she said to me “did you not tell the Duchess who you were?” My reaction was “who am I?”

She told me that the Duchess, known as Nancy Sullivan before she married the Duke, lived in Glanmire in Cork at one time. She and my dad both used to hunt with the United Hunt in their young days.

My dad had written his hunting memoirs some years earlier. Nancy Sullivan was mentioned a good few times. Maybe there was some truth in what my Mum was saying about the two of them!

Naturally I didn’t have the Duchess’s address but I copied his memoirs and sent them to Jim Dreaper and asked him to forward them to her.

I just cannot thank you enough for sending me those hunting reminiscences of your Father’s, best present I’ve had for years. How I wish I’d known that day at Fairyhouse that it was John’s son that had beaten us, I’d have been almost pleased! I can truthfully say that I remember vividly 90 per cent of the people your father mentions and of course Uncle’s Dick and Fletcher were two of my dearest friends as indeed was your father – even more so! And all the covers he mentions I think I could still find my way to blindfolded.

Please next time we’re on a racecourse together will you make yourself known and we’ll retire to the nearest “watering hole” (underneath the stands) and we’ll reminisce. With renewed thanks,

Sadly, that never happened but I am so glad I made the connection with my dad’s old hunting buddy.

‘There were times I had to step outside to hide my tears, take deep breaths and then carry on’
7