Franz Schwatschke was a prodigious inventor, including of a waterbike 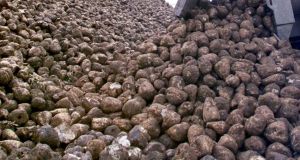 In 1926, my nice father Franz Schwatschke (1895-1987) was headhunted from Moravia in the Czech Republic for his technical knowledge, to work as one of the original engineers of the sugar factory at Carlow. He was already known for his various inventions of electric motors and transformers, and his unpatented waterbike (1927), and for his ability in solving technical problems where others failed. Foreign engineers often came from abroad to consult him, and he was given a company house with red telephone, which he requested, to be on call 24/7.

In 1949 my parents bought what looked like a small continental villa, The Chestnuts, but which extended to being a very large country house with swimming pool at rear. We used this as our summer home. It was here that we first tested the more “wild” inventions, eg perpetual motion and water shoes. The former was a large mechanical wheel which we tested in our fountain, with attached airtight pockets surfacing regularly to make it turn.

Water shoes were steel toe caps over shoes, with a brass propeller which activated by each step made, raising the individual upwards. The propeller ceased on lifting the foot for the next step. A thin undernourished Carlovian might have walked the Barrow, but a stout opera singer would soon gargle. In winter we made our own steel ice skates, attached to ankle-high nuns boots, to skate on a newly frozen lake nearby.

My father also bought a “midnight blue” Triumph car from the Olympia stand at the London motor show. It had a six-cylinder engine and large chrome radiator grill with big headlamps divided in three sections. It also had a snakeskin-covered roof (imitation) and a nice dashboard boiserie, and leather seats with inflatable air cushions, with pale orange blinds on rear windows. After some 20 years of driving in comfort, fatigue set in and the rusting saloon was removed from the chassis and used as a chicken house, where I often held a one-sided conference with a hoarse chicken.

The best was yet to come however, when my father put extra supports on the wheels of the “car”, and a plough at the rear for ploughing potatoes. Also a circular saw for cutting timber and a generator for our electricity. Its greatest power became evident when he moved the rear axle forward to accommodate a second gearbox, then having eight gears, powerful for extracting old tree stumps from the ground. Otherwise all was normal.