A flight from Warsaw to Liverpool, another to Cork diverted to Shannon and then a bus to Galway and another to Athlone . . . 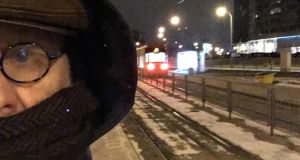 Minus 14 degrees waiting on a tram in Warsaw. 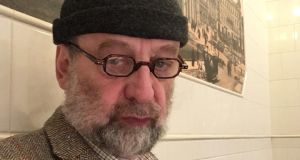 I had been in Warsaw for four weeks, standing around in -14 degrees of icy wind on frozen streets. I needed to get home to Leitrim.

So I went to the airport early on Wednesday, with four bags, and was shocked to hear the Dublin flights were cancelled. No more until Monday someone suggested.

But I needed to see Leitrim, so when I saw a flight to Liverpool I took it.

It was fascinating to arrive in England from Europe. Usually I’d expect to see a few gentle signs for passport control with EU flags. But the signs in Liverpool are stark. In clear blue and white they declare the blunt reality. UK Border. I only hope they don’t intend putting up signs like that in Fermanagh after Brexit.

Maybe I looked suspicious, because I was taken aside as I walked through customs.

“Can you come this way sir?” the lady officer asked. “And do you have any cigarettes today?” pointing at my luggage.

“I don’t smoke,” I confessed, which I thought was funny. She wasn’t amused.

In Liverpool I measured out the day in mugs of coffee. And on one occasion the wireless pay machine wasn’t working at the cash desk and I had no sterling.

“I have only Polish money,” I joked, but the man just stared back at me.

It was a long day in Liverpool, in the desolate arrivals hall, wondering what to do next, until I saw a flight to Cork on the board, and if it did take off I promised myself I’d be on it.

And I was. Except that when we got close to Cork, the pilot announced the airport was closed. So he flew to Shannon. Which didn’t amuse a farmer from Limerick who had phoned the wife to say he was heading for Cork.

“She’s after driving three hours in the snow,” he said, “to pick me up in Cork, and now you want me to phone her and tell her I’m in Shannon, 15 minutes from my front door.”

I had booked a hotel in Cork, and seats on the morning train to Dublin and the afternoon train to Carrick-on-Shannon. But in Shannon I learned those trains were cancelled.

However, there was a bus stop outside Shannon airport where people were gathering for a bus to Galway. So I hopped on that when it came and was in Galway by midnight. It was snowing heavily by now. I found a wonderful night porter in the Meyrick, who sorted me out with a room and said he could personally bring me a pot of coffee in the morning at 5am.

Which he did, and I went off to find the 6am bus for Sligo. Except that no bus came and so I presumed it was cancelled. There was, on the other hand, a train warming up on the platform behind me.

“Where’s that going,” I wondered, and someone said it was heading for Dublin. So I got a ticket from the machine, jumped on and headed for Athlone. Now I was getting really close to Leitrim, although the roads from Athlone to Leitrim would be impossible to negotiate.

Before arriving in Athlone I phoned a friend in Mullingar who was out early delivering the daily vegetables to nursing homes in the county and he said the N4 and the N52 to Tullamore were open.

Stay on the train until Tullamore he suggested. Which I did and had a fine breakfast in the Bridge Hotel as I waited for the beloved who had agreed to risk driving from Leitrim.

The foyer was busy. People with seriously ill relatives in the local hospital were checking into the hotel because they couldn’t go home. Ciaran Mullooley was in his working anorak with headphones on his ears chatting with his camera man in the foyer. And as I looked out across the snow-covered patio seats from the breakfast room, I saw my beloved’s Citroen crawling and crunching through the snow-covered street towards the hotel door.

“I’m safe,” I whispered. And so I was. And grateful that evening for a home, a fire and a glass of whiskey. And grateful too for all the people out there, clearing the snow, driving the ambulances, and fixing the electrical damage. And grateful to the Ryanair staff, the Galway bus driver, the night porter in the Meyrick, and the multitude of others who had made my journey from Poland to Leitrim possible. I had been stuck at a tram stop in Poland on Wednesday morning. I was back in the hills above Lough Allen 36 hours later.