Laura Kennedy: MMA is the most egalitarian sport we have, but it is just a little hard to see that, past the ring card girls 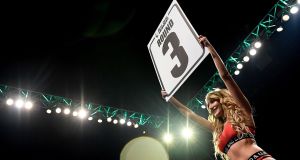 A ring card girl carries a round-number card in between rounds at a boxing title contest in Louisville, Kentucky. Photograph: Bobby Ellis/Getty Images

Days after the Professional Darts Corporation announced that it would no longer use so called walk-on girls to accompany players on stage, Formula One  announced that it was following suit, and would no longer use grid girls. The announcement declared that displaying revealingly dressed women standing in front of cars before grands prix “does not resonate with our brand values and clearly is at odds with modern day societal norms”. The public reception was varied.

I am not a big sports fan in general, but I am a devoted fan of mixed martial arts, and have been for years. I consider it to be the most egalitarian sport there is. Male and female athletes train together, learn from one another, and possess on average – of course there is always vast diversity within groups – different sorts of skills.

Unfortunately, enjoying combat sports as a spectator is not always straightforward if you are a woman. When women go to watch MMA or boxing, for example, there can be some optical signals suggesting that they are not experiencing a product which values them as fans and consumers, and send a powerful visual message that this sport is not “for” them.

Ring card girls – the underwear-clad young women who hold numbered cards between rounds and stand passively in the background at pre-fight weigh-ins – exist within MMA because they are a traditional feature within boxing, or rather, that is why they first became a feature of MMA. Some critics of ring card girls in combat sports protest that they are exploited victims of patriarchy, or that their presence is redundant; that they are archaic features of a time past. Neither of these assessments is accurate.

Ring card girls in more successful promotions are well paid, and do the job by choice. Most of them pursue modelling careers outside their work with promotions like the UFC; a job which brings them many perks and benefits. Some of the more successful UFC girls, like Arianny Celeste, possess social media followings that far outstrip those of most fighters within the company.

The independent following possessed by some of the more popular ring card girls gives the UFC the opportunity to advertise (for the ring card girls are embodied advertisements for the company) to pockets of their targeted 18-39-year-old male demographic which they might not otherwise reach. These young women publish photo shoots in men’s magazines, and many have annual calendars. Their Instagram and twitter posts garner huge interest.

The female form sells things – this is incontrovertibly proven. The ring card girls make money for, in this case, the UFC. Far from redundant, they are a good business strategy on the part of the company that pays them.

However, there is a legitimate argument to be made against the use of ring card girls. MMA promotions may come to realise that as more women compete in MMA, more women are beginning to watch it. Advertising around these events, in the form of beer and tyre adverts, and the ring card girls, is targeted entirely toward men within the UFC’s specified demographic. This is evidently lucrative, but potentially less lucrative than a diversification that signals to female fans that their money – and their presence – is welcome. Appealing to the base you already have isn’t the best policy for growth or engagement.

Realistically, it is obvious that far more men watch MMA promotions than women, and this is also true of the UFC. The ratio, while it will change with time, will likely maintain a male majority in viewership. However, there are many women who are put off developing an interest by the optics of the ring card girls.

As an established fan, I find myself put off by them – their presence certainly serves to obfuscate the seriousness of the sport. Though the use of the archetypal beautiful woman in advertising is sure to make money, there are far more potential female fans outside in the world, with money in their pockets that they would happily hand over if they knew that MMA is – and it is – the most egalitarian sport we have. It is just a little hard to see that, past the ring card girls. They are, after all, there to draw our attention.