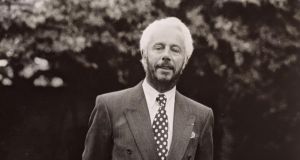 Michael Cronin: erudite, with a fund of stories and anecdotes, laced with a fine line in self-deprecation, you departed Michael’s company enriched by the conversation.

Michael Cronin died in his 91st year recently on January 5th. He had many facets to a long and productive life, not least part of that group of us, organised by Morgan Sheehan, who met for an early breakfast and sometimes dinner over many years.

The pandemic ended that and prevented us from attending his funeral at Mount Jerome Crematorium in Dublin. In time, we will honour the memory, and celebrate the life, of a dear friend.

Michael Cronin, born on December 20th, 1929, was the last surviving son of Kitty Kiernan, who was engaged to Michael Collins before his assassination during the Civil War.

She went on to marry Army officer Felix Cronin and the couple had two sons, Felix jnr, who died in 2000, and Michael.

The Kiernan-Cronin marriage was not a happy union. She was obsessed with Collins’s memory. A portrait of Collins on an easel dominated the hallway of their home, and she chose a grave near his while still a young woman.

Kitty Kiernan was only 52 when she died in 1945, a disappointed and embittered woman, born before the era of women’s liberation and ill-suited to the role of suburban housewife.

Michael spoke glowingly of his father, less so of his mother, although he understood her frustrations.

Felix Cronin snr quit alcohol and was appointed to a State job by Sean Lemass when he left the Army, despite the strong Civil War bitterness that still existed.

Michael spoke glowingly of Lemass and his generosity in providing badly needed employment for an old foe.

Felix snr made a deal with Michael. He would pay is way through UCD if he passed all his exams and did not drink alcohol until he graduated with an agricultural degree. On the evening of his graduation, his father handed him five pounds to celebrate.

Michael won a British colonial service scholarship to Cambridge University and went to Imperial College in Trinidad to study tropical agriculture. After graduating, he spent two years working in Nigeria as an agricultural adviser. Returning to Ireland, he was managing director of a company named Potash and Continental.

A keen sportsman, he played rugby for Newbridge College, Cambridge University and St Mary’s RFC in Dublin. A contemporary on the playing fields was Ulick O’Connor.

Michael lived in an apartment in Merrion Street, in central Dublin, in retirement, frequently setting off in the early morning to meet friends for breakfast, including close friend Derry Hussey, who died shortly before him.

I recall him now, arriving at 8am, at Bewleys in Grafton Street, and later other venues, dapper as always, with his daily copy of The Irish Times.

Erudite, with a fund of stories and anecdotes, laced with a fine line in self-deprecation, you departed Michael’s company enriched by the conversation.

I last spoke to him on the telephone before Christmas, when we talked of having a post-pandemic coffee. Sadly, it is not to be.

Michael is survived by his wife Noelle, children April, Tim, Emma and Juliet, grandchildren and a great-grandchild.