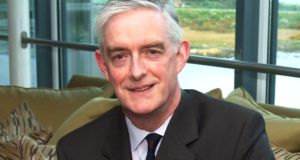 Born: October 1st, 1948
Died: March 25th, 2020
Michael Boland, who has died from Alzheimer’s disease aged 71, was a prominent general practitioner of his generation who made a significant contribution to Irish medicine. He saw the potential for general practice to develop into a speciality providing diverse community care. The former Skibbereen GP went on to play a critical role in the evolution of contemporary general practice and was a tireless ambassador for Irish medicine throughout his career.

As president of the World Organisation of Family Doctors (Wonca) from 2001 to 2004, he travelled extensively, promoting the organisation’s work in helping colleagues in the developing world meet their many health challenges. In a prelude to hosting the organisation’s world conference in Dublin in 1998, which attracted more than 5,000 visitors, Boland brought fellow members to Killarney. During a boat trip across the lakes, a huge storm blew up and nearly capsized the boat. The incident did not, however, stop the organisation from appointing Boland president some three years later.

Boland spent his early years in Skibbereen, Co Cork, where his father was a solicitor and his mother a schoolteacher. Following secondary education in Clongowes Wood College, in 1966 he entered UCD as a medical student. Qualifying in 1972, he worked the usual rotation of hospital jobs before becoming a trainee GP in the Skibbereen practice of Dr Micheal O’Sullivan. He was asked to stay on as partner and practised there for 32 years. A medical student recalls seeing an impressively broad variety of skills during his elective attachment in the 1980s: from Boland successfully talking down an acutely psychotic man from the roof of his farmhouse to carrying out a difficult forceps delivery on a pregnant woman in the local district hospital.

He married Susan O’ Rourke in 1972. They met in UCD, where O’Rourke was a social science student.

While a trainee representative on the Institute of General Practice, he first floated the idea of an Irish College of General Practitioners (ICGP) to a mixed response from older colleagues. In 1979 he persuaded the Postgraduate Medical and Dental Board to support the piloting of small group continuing medical education for GPs, providing trained leadership and peer reviewed group education.

An immediate success, continuing medical education expanded nationally and internationally and was a key building block in the establishment of an Irish College of General Practitioners in 1984. Boland had drafted the constitution of the new college and became its first chairman of council from 1984 to 1987, a period when 95 per cent of GPs took up membership. Former chief executive Fionán Ó Cuinneagáin recalls that Boland “was the key driver in the establishment of the ICGP and in many achievements in the healthcare system, both at home and abroad. His contribution was enormous.”

As a member of the Medical Council, he led a drive towards the recognition of general practice as a specially under EU Directive. Ireland became the first EU member state to do so, in 1989. He was the founding Irish member of the European Academy of Teachers in General Practice and a contributor to many other European initiatives.

During his time as the liaison between Wonca and the World Health Organisation, Boland organised a Strategic Action Forum in Canada, Making Medical Practice and Education More Relevant to People’s Needs: The Contribution of the Family Doctor. Thanks to this initiative, general practice has strongly influenced the development of WHO policy for primary health care.

Appointed director of the ICGP Postgraduate Resource Centre in 1998, he continued to establish long-term objectives and coalesce national and international strategies. Staff at ICGP recall looking forward to his arrival into the office on a Tuesday morning, full of enthusiasm and energy, smartly dressed with an infectious smile, yet quite shy.

As chairman of the Office of Tobacco Control, he oversaw the introduction of the smoking ban, another Irish first. He was a lifelong supporter, council member and fellow of the Royal College of General Practitioners, and was awarded its highest honour, the Foundation Medal, in 2011. UCC conferred an honorary degree of doctor of medicine on him two years earlier.

Steering a small boat among the islands between Baltimore and Schull was his favourite way of relaxing. That and singing Dear Old Skibbereen as his party piece.

Asked to describe himself in 12 words by The Irish Times for a feature in 2004, he said: “Failed obsessional; relaxed Catholic; unelected politician; international Irishman, specialised generalist; ageing juvenile.”

He is survived by his wife, Susan; daughters, Eve and Mary Jane; and son, Mike.

Róisín Ingle: Even Matt Damon has fecked off back home
4

We must consider the negative health consequences of the lockdown
5