Meghan Trainor: ‘Now I see the world as one big germ-pit’

Despite Covid-19, the pop princess is looking forward to the festive season and her Christmas album 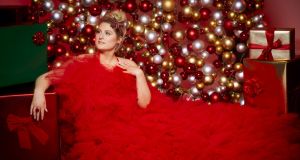 Meghan Trainor: “I feel everyone will be ready for Christmas this year. Especially because we’ve all had such a horrific year, we need something to look forward to.”

In a year crammed with an unrelenting run of unexpected events, may we add another to the list: a collaboration between pop princess Meghan Trainor and soul legends Earth Wind and Fire. For a song about Christmas, no less.

The 1970s group can be heard on Holidays, a big and bold funky tune of a track that was sparked after Trainor was invited to see the group through industry connections. “I was even in their power circle before the show, I didn’t even know how I got there,” she says, speaking on the phone about their first encounter. “At that point I was thinking about doing a Christmas album, so I asked them if they would feature in a song. We wrote a song from scratch that sounds exactly like what Earth Wind and Fire would do, and sent it to them. Literally the next day they told us they loved it and wanted to be a part of it, and we’ve been crying ever since.”

Recorded using a mobile studio that visited each of the members’ homes, and employing their musicians too, the novel song features in Trainor’s Christmas album, the interestingly titled A Very Trainor Christmas. The rest of the album was created at her home studio, given Covid-19 restrictions in California, where she lives with her husband Daryl Sabara as well as her two brothers (now there’s a reality series in the making).

It says plenty about the state of affairs that Trainor – best known for the feminist anthem of sorts All About That Bass – has swapped her bubbly, positive energy for a more cautious tone when discussing the pandemic. “I’m terrified,” she says. “My aunt’s a nurse, so she tells me all the horrific stories of like her co-workers dying, and people coming in that she can’t help. It’s been crazy. So we’ve been very strict, especially because my dad is on the older side.”

That’s understandable: California has the highest number of cases in the States. It’s meant that she’s spent the last few months almost housebound, aside from occasional visits to her grocery store and her parents’ house down the road, where she’s speaking from now. And being pregnant with their first child, she’s taking extra caution to keeping safe.

“Now I see the world as one big germ-pit,” the 26-year-old says. “But here in LA, but I’ve never seen anyone like in those videos where people make a scene and refuse to wear a mask – and I’d be the first to video them if I did. Instead, I’ve noticed that people are understanding. When I’ve gone to the doctors, we know to go in the elevator one group at a time. It’s awesome to see the good side of it, instead of just the scary videos online.”

Like many of the music industry, the year began promisingly for the Grammy-winning artist: she began her first stint as a coach on The Voice UK, and released her third album Treat Myself at the same time. But coronavirus halted everything; the show paused before the live rounds could take place, and tours were cancelled without a clear resumption date in sight.

“At first, the whole music industry was rocked,” she says. “I’d been working three years on that album and had to stop just after it was released. And even Billie Eilish finally got to go on the tour everybody’s been waiting for and it had to stop. I was heartbroken for her. But I feel the world is telling us that we need to stop and take care of ourselves. And because technology is so good now, it’s a cool way for creative people to get more creative and figure it out.”

I really miss snowy Christmases now and I still do. But it’s awesome when you can swim in your pool outside all day, and then go inside and do Christmas.

During her time at home, she made a song to encourage people to vote in the recent American elections, played a concert in aid of Feeding America, a nationwide network of foodbanks, as well as crafting her Christmas album that had been threatening to come for all of Meghan’s life: it’s her favourite time of year as her birthday is on December 22nd, and that’s when she got engaged in 2017.

“Darryl took me to an animal rescue centre, and they lit it up all Christmassy with snow on the ground,” she says, explaining how he popped the question. “We went through a tunnel of lights, and I grabbed my phone to Snapchat it and show my family that I was in my dream tunnel for my birthday. He asked me to put my phone away, and then got on his knee and then proposed to me. Then I saw all my family come out of the woods, literally from hiding. It’s just the best time of year for me, so that’s why I stacked my wedding on it too. We got married the same day the following year.”

Growing up in Massachusetts, she was used to white Christmases rather than the sunny ones of California. “At first it was weird,” she says of the change. “I really miss snowy Christmases now and I still do. But it’s awesome when you can swim in your pool outside all day, and then go inside and do Christmas.

This year will be a little different, with just the close family rather than the big celebration that usually takes place chez Trainor. “I feel everyone will be ready for Christmas this year,” she says. “Especially because we’ve all had such a horrific year, we need something to look forward to.”

A Very Trainor Christmas is out now.