Royal Baby: Childbirth is a great leveller but not if you're Kate Middleton

How much lovelier would it have been if she had betrayed even the smallest hint of the brutality of the experience she had just endured? 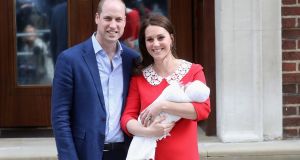 The joyous ending to Kate Middleton’s third pregnancy materialised exactly according to the script.

We are all well familiar with the drill by now: mere hours pass after the royal announcement, before Middleton emerges through the doors of the Lindo Wing in a flattering shift dress by Jenny Packham to present to the anxiously waiting public her bouncing hair and flawless skin – sorry, her beautiful new baby.

Nonetheless the world – at least, the corner of it not preoccupied with actual news – watched, as the tabloids put it, in breathless anticipation. And sure enough, there she was, just seven hours after the birth, stepping out of the Lindo Wing in a Jenny Packham shift dress (Red! How unexpected!) and nude heels, smiling and waving alongside Prince William, as she held her newborn son.

How to describe the vision that is a mere-seconds postpartum Kate Middleton? Surprisingly clean, was the first thing that came to my mind. Well rested and perfectly groomed, with freshly tonged hair, neat earrings, a hint of eyeliner and a judicious dusting of blush. She looked ethereally beautiful, and utterly unrealistic - as accurate a representation of new motherhood as a renaissance painting of Madonna and child.

How lovely for Kate that – yet again - she manages to look so well just hours after giving birth, we cooed, on script. How wonderful that she is not just upright, but floating about on blissfully unswollen ankles offset by tasteful heels. “She looks absolutely gorgeous, doesn’t she. As always. Taking it easy in those heels, she’s done it again. How impressive is that,” said the Sky News anchor, just a tad bitterly.

How much lovelier would it have been if she had betrayed even the smallest hint of the brutality of the experience she had just endured? I didn’t actually want to see traces of blood, or witness a wince of pain as she was hit by post-birth cramps, or spot the telltale bulge that betrayed the industrial strength sanitary pads she’ll no doubt have been wearing. But a bit of puffiness under the eyes would have been nice. A few broken blood vessels around the lips. A stray hair or two, even.

In the photos of my first few hours post-partum with each of my three children, I look sweaty, moon-faced and dazed, like someone whose insides have just been squeezed through a garlic crusher. I couldn’t sit without the help of an inflatable swimming pool ring. I wore pyjamas and nursing bras on my aching breasts and my matted hair was held back with a scrunchie. By any contemporary standard of beauty, I looked hideous. But I have also never looked better.

Because new mothers are always beautiful. But it’s not the kind of beauty that comes from a Bobbi Brown shimmer block or gallons of Moroccan hair oil. Theirs is a much more profound beauty, born of a combination of their amazement at the sheer fact that they managed to survive the previous hours; their newfound knowledge of their own strength; and the primal, fierce protectiveness they feel towards this small, squirming human.

Childbirth is a great leveller. But not if you’re Kate Middleton. Not if you’re a royal. At least, that’s what they’d like us to believe. The truth, of course, is that the royal method of giving birth is not that different to the way the rest of us do it. Sure, she probably wasn’t left waiting on a crowded ward, gasping for an epidural. She won’t have been howling in agony only to be met with the four most devastating words in the English language: “just three centimetres dilated.” And of course she had a stylist, hairdresser, and make-up artist on hand to assist with the clean-up.

But, when push comes to shove, there’s no easy way to get an entire human out of your uterus. Whether we give birth by c-section or vaginally, in a birthing pool or a luxury suite with the help of a royal obstetrician, most of us are lucky if we can stand upright afterwards, let alone navigate steps on heels holding that small human in one arm, while managing to look like we’ve just survived nothing more traumatic than a shortage of cucumber sandwiches at the Ritz.

There’s something unsettling, and even a little bit sinister, about how sanitised the official royal approach to pregnancy and birth is; how determinedly they cling to the pretence that the whole thing is no more exerting than a marathon Netflix session in front of Call The Midwives.

It is hard to imagine that this was Kate’s own idea – that, the very second they’d finished stitching her up, she sat upright and yelled, “Hold off on the tea and toast, and fetch me someone to thread my eyebrows!” No, this whole charade will of course have been engineered by the palace. Every detail, right down to the twee announcement on Twitter that she was “safely delivered of a boy,” is designed to make the experience as unrelatable and inauthentic as possible.

It is a throwback to Victorian times when women were confined during the later stages of pregnancy, mostly for fear of upsetting onlookers, and when experts like Elizabeth Scovil in 1896 advised women on the “proper hairstyle” to be worn in the delivery room. (“The hair should be parted in the middle at the back, firmly braided in two tails and tied so it will not come unloosed,” in case you’re currently in the throes of labour and wondering.)

But even the Victorians didn’t haul new mothers out of bed and into a nice pair of nude heels hours afterwards. They tended to leave women alone after giving birth, not expecting them to get out of bed until after the ninth day.

None of this would matter if it was just about the royals and their strange, anachronistic ways. But the reality is that the expectations placed on Middleton’s shoulders aren’t all that different to the pressures on the rest of us. There might not be banks of cameras waiting outside the hospital to capture the precious moment when we limp out to the car and lower ourselves onto our trusty inflatable ring, but there is still a ridiculous cultural expectation that we’ll not hang around too long in the dreaded bouncing back stakes - that before you can say “pass me the Lansinoh cream”, we’ll have shed the tracksuits in favour of a pencil skirt and be busily breastfeeding, peeling butternut squash and answering emails from work, all at the same time.

When Kate Middleton emerges looking more rested seven hours after labour than most of us manage after seven hours of sleep, it does nothing to dispel those expectations.