Mary McAleese: a thorn in the church’s side?

In describing Pope Francis’s plans for a synod on the family as ‘bonkers’, Mary McAleese was being a consistent advocate of a more active, engaged Catholic Church 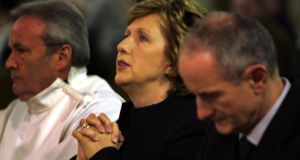 Praying for change: Mary McAleese at Mass with her husband, Martin, in 2008. Photograph: Eric Luke 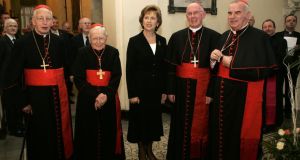 Praying for change: McAleese with Pope Benedict XVI at the Vatican in 2007. Photograph: Christophe Simon/AFP/Getty Images 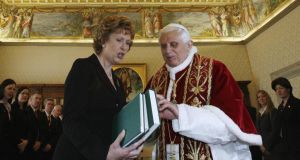 Some people have taken offence on behalf of Pope Francis because Mary McAleese, the former president, threw the word “bonkers” in his direction. One figure in the Catholic Church said it was unbecoming of a former head of state to speak this way. A letter writer to this paper described her remarks as terribly unfair.

Speaking at University College Dublin last Monday, to mark her receipt of the university’s Ulysses medal, McAleese criticised the pope’s plan to ask a synod of bishops next October to advise him about church teaching on the family.

Last year the Vatican circulated a questionnaire to Catholics worldwide seeking feedback on pastoral issues of marriage and family. In her interview last Monday McAleese said: “I wrote back and said I’ve got a much simpler questionnaire, and it’s only got one question, and here it is: ‘How many of the men who will gather to advise you as pope on the family have ever changed a baby’s nappy?’ I regard that as a very, very serious question.”

It’s doubtful whether the plain-speaking Pope Francis would take offence at any of this. He may disagree with the substance of what McAleese said, but its manner of expression would hardly faze him. After all, this is the pope who advised his clergy to get down and dirty among the people so they smell of them and who has spoken about the narcissism of popes and theologians.

As for McAleese, she is just being consistent.

She continued: “It was said with the kind of dismissive authority which is intended to silence protest or debate. The owner of superior knowledge, of real certitude, had spoken, and that was that.

“The same priest, incidentally, kept a double-entry score book of the indignities heaped upon Catholics by the Protestant government at Stormont, many of which, ironically, involved keeping Catholics out of jobs for no reason other than the fact that they were Catholics.

“The irony of the similar group exclusion of women was, unfortunately, lost on him.”

But it was not lost on her mother, who “had inculcated into us a respect for the priesthood bordering on awe. I watched, therefore, in amazement as the chair was pulled from under the cleric and he was propelled to the front door before the bottle of baby Powers had been uncorked.

“ ‘You – out’, she roared at him. ‘And you,’ she said to me, ‘ignore him.’ That was the only advice I ever received from either parent on the subject of career choice.”

Ignoring that priest, and following her mother’s advice, McAleese went on to be among the first few women to study law at Queen’s University Belfast. She became the first Catholic and first woman director of its Institute of Professional Legal Studies and, in 1993, its professor of law. In 1994 she became the university’s first woman pro-vice chancellor.

Clearly, following her mother’s advice, and ignoring that of a male celibate cleric, was the way to go.

In March 1997, before she was nominated for the Irish presidency, she wrote in the UK Catholic weekly the Tablet that “most intelligent men and women can recognise sexist cant, no matter how nobly dressed up, no matter how elevated the speaker, from miles away”.

She continued: “When the Holy Father admits that the Church just might have been a teensie-weenie bit sexist at times, we wait for the next obvious statement, that the Church is going to take a long, hard scholarly look at itself.

“It is going to try to understand how its own thinking, its own understanding of God, has been skewed and damaged by 2,000 years of shameful codology dressed up as theology and, worse still, God’s will. But the statement does not come. Instead the big gun, the howitzer of Infallibility, is armed and aimed.”

In a 2012 interview with Gay Byrne on RTÉ television she disclosed that, where the ban on women priests in the Catholic Church was concerned, she had written to John Paul II wondering whether, with her views, she was really a member of the church any more.

She got “a lovely letter back on his behalf”, assuring her she was indeed a member of the church but asking that she try her best to accept church teaching. She wrote to the then archbishop of Dublin, Desmond Connell, seeking literature on the issue. What she received back was “wickedly poor scholarship”, she said.

That same month, October 2012, McAleese made clear the mission of her post-presidential life at the launch in Dublin of Quo Vadis?, her book on canon law: she is intent on being a thorn in the side of Rome for the rest of her days. “I’m here for the long term,” she, shall we say, advised the church authorities. “Get used to it.”

For the rest of her life, she said,“this is where I place myself; at the heart of my church’s struggle to be part of a world where love will prevail”.

She continued: “For the first time in the 2,000-year history of the Catholic Church, we have the phenomenon of an educated laity. The church isn’t sure how to handle us yet, because for most of those 2,000 years they hadn’t to deal with an educated laity.”

The great change in the future was that lay people would stop being passive. “They will do what canon 212.3 says: ‘Tell your sacred pastors what you think.’ Let them know your opinion.”

Also at the launch were most of those Irish priests silenced by the Vatican. She has championed those priests but as a lawyer would, on the grounds that none has been allowed due process. All were “tried and convicted” without their knowledge and became aware they were under investigation only once sentence had been passed.

For now she resides in Rome as she studies for her doctorate on children’s rights in canon law. It should be finished towards the end of next year. Her intention, even ambition, is to continue to aggravate Rome over its attitude to women, gay people, governance, mandatory celibacy and more for the remainder of her days. At 63 years old, she has lots of those left.

She will do this through occasional articles, addresses and interviews such as that at UCD this week. Personally, sources say, she has no ambition to be directly involved in heading any Vatican congregation or body. She, apparently, is intent on remaining “unbecoming” where her church is concerned.

Those who may be upset at this should just, well, get used to it.

I would say to anyone thinking of returning to Ireland: look beyond Dublin
Real news has value SUBSCRIBE