Martin Gale and the hidden beauty of Turlough Hill 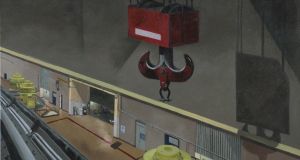 Detail from Martin Gale’s painting, ‘Inside Turlough Hill 2014’, one of a series of works commissioned by the ESB 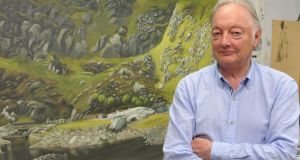 Martin Gale on painting Turlough Hill: “what appealed to me most is how invisible it is. You’re right on it before you see it.”

There’s a curve in the road as you drive towards Dublin from Ballymore Eustace, the Co Kildare village where Martin Gale, one of Ireland’s leading artists, lives and works. On a winter evening, the rolling fields fade into black as the lush landscape disappears. Then, as the road turns, the land falls away and the lights of Dublin are laid out like a carpet ahead. It’s a strange sensation, as if you’re on the hinterland between two worlds and for a moment neither fully in one place nor the other.

This atmosphere of strangeness, of being slightly out of step, permeates Gale’s paintings. He’s interested in what he describes as “that slight tear in the fabric of reality”, and it makes him a particularly apt choice for the most recent ESB commission – to paint a series marking the 40th anniversary of the commissioning of Turlough Hill, which surely has to be one of the most wonderfully strange places in Ireland.

The company that makes and manages our electricity has a rich history of working with artists, beginning with Sean Keating’s iconic series of paintings of the Ardnacrusha hydroelectric scheme on the River Shannon in the 1920s. This was one of the first major projects of the new Irish Free State, and Keating’s paintings celebrate the heroism of the Irish worker, and mark the project as a symbol of a new beginning in modern Ireland.

Ardnacrusha is huge, a vast engineering works, visible from a considerable distance; but Turlough Hill, up in the Wicklow Mountains, in the area where the TV series The Vikings is filmed, is something else entirely. For a start, it’s almost impossible to spot: “look for a part of the mountain that’s flatter than it ought to be,” suggests Gale when I ask for directions, although the day I drive up there’s a thick mist and I almost miss the turn.

Gale’s large-scale oil painting, the centrepiece of the new series of oil and watercolour paintings, shows the rocky hillside falling towards a slate-grey lake. But there’s something else: just at the right edge of the canvas are four metal spires, thinly visible against the grassy slopes. Look closer still and you can make out some small low buildings, and the black square of a tunnel entrance. These are the lightning conductors, the administration buildings, and the way in to Turlough Hill.

Station Manager Dave Sexton is keen to point out the care with which Turlough Hill was designed in order to have the minimum possible environmental impact. What strikes me, however, is how James Bond the whole thing looks.

Turlough Hill is Ireland’s only pumped storage station. This means that water in the lower lake, the one depicted in Gale’s painting, is pumped uphill, to an artificial upper reservoir, at night, when the demand for electricity is low. Then in the daytime, the water runs down, powering turbines and creating countless megawatts of energy for the National Grid.

The thing is, to make this work, the pumping station has to be lower than the lower lake itself, so we walk down a long tunnel, blasted into the hill, curving round through solid rock to open up into a control centre in the bowels of the earth. A low rumbling, growing steadily louder, warns of a coming car and, further in, I notice that other parked cars are all facing out, with keys left in the ignition. Quick getaways must be part of the protocol round here.

“Sean Keating was in the back of my mind, he had to be,” says Gale. “And I was excited, I knew about Turlough Hill because I live very close to it, but I’d never been. I wanted to see it and make sense of it. There are deer all over the hills there, and in winter, I’m told, they come right down and stand at the tunnel entrance for the warm air. And what appealed to me most is how invisible it is. You’re right on it before you see it.”

Simultaneously working on a series of other paintings for an exhibition, currently at Dublin’s Taylor Galleries, Gale also enjoyed the experience of being given a subject to paint, rather his more usual process of developing his own, “to relinquish a bit of control” as he says. In the studio attached to his home, there are large canvases on easels, waiting to be declared finished, before being taken to Dublin for the show. Then there are pots of paint brushes, lots and lots of them, and sketches, watercolour drawings, visual notes and references. It’s a well ordered profusion, a kind of creative chaos that has an underlying system to it. Two dogs snooze on a large couch, occasionally opening an eye to cast suspicious glances at the cat.

There are also one or two small paintings of horses, although these won’t feature in the Taylor exhibition.

Born in England in 1949, Gale moved with his family to Ireland when he was very young. They were steeped in horses; his father was a jockey, and later chief handicapper for the Turf Club, while his mother rode in point-to-points.

“My mother always kept a mare,” remembers Gale, “which she bred from every year and that put me and my brother through boarding school.”

He then went to Dublin’s National Collge of Art and Design. “ I was in a great year: Mick Mulcahy, Charlie Tyrrell, Mary Farl Powers, Joe Comerford, Michael Cullen, Brian Maguire, Gene Lambert. We all batted around and learned from each other.” But he deliberately avoided equines for a long time. “It was the milieu we were brought up in, there were horses everywhere. Every house we went into had snaffles and horse paintings. Sometimes you have to get away from something to get back to it, I didn’t want to get sucked in, but now when I pass a field, I’m looking and thinking of how I’d paint them.”

This exhibition focuses on what the artist describes as “territory”. That sudden view of Dublin from the edge of Kildare appears in daylight in Down to the City, where the two worlds that Gale inhabits clearly abut. “Yes, it’s autobiographical in one sense or another,” he agrees, though is quick to add that the paintings “aren’t about anything. There’s an atmosphere, a sense that something’s happened, but there’s no beginning, middle or end.” I love the enigma of them.

In Guest, a woman, dressed as if for a wedding, is standing in a field in front of a huge chestnut tree. Aeroplanes swoop by in the upper left hand corner. There’s no clue as to what she’s doing, what she’s contemplating. Is there a crowd just out of view? Or is she entirely alone? We’re back to that idea of the slight tear in reality, where your own imagination can really take off and fly.

“It’s the something that just interrupts your stride, in a way,” says Gale, his thoughts returning to Turlough Hill. “It’s something that place has.” Gale joins a distinguished alumni of artists commissioned by the ESB, including, as well as Keating, Maurice MacGonigal, Robert Ballagh and Donald Teskey. ESB group property manager Malcolm Alexander is keen to continue the support. He describes the process of selecting the artists for commissions as about feel, touch, “a process of osmosis. It’s not like ordering widgets,” he says.

Back at Turlough Hill, the mist is lifting, and the landscape is starting to look uncannily like Gale’s paintings of it. Given the current hectic debates about wind farms, it’s hard to imagine somewhere like this ever being built again, although the simple fact is that we all need electricity, and it has to be generated somehow.

Turlough Hill captures the imagination quite profoundly. When the ESB ran public tours earlier this year to celebrate the 40th anniversary, 4,500 people came over just two weekends. Apart from the brilliance of the engineering feat, the most wonderful thing about Turlough Hill is that evocative strangeness, two worlds colliding, the natural and the artificial – one overlaying the other. And that, when you think about it, is symbolic of how we live.