Cork singer on pivoting plans, living away from home, missing performing and recording an album remotely 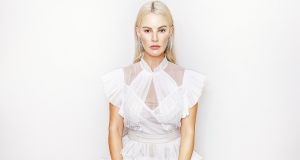 Lyra: “I’ve definitely lost some momentum by not being able to be on the road. I think that’s where I come alive most.”

This has been a tricky year for most, but spare a thought for Lyra, the much-touted singer from Cork whose promise of greatness was due to come good in 2020, four years after her first EP was released. Except the obvious happened.

The year began as intended. Lyra had flown to the music capital of Los Angeles to begin recording her debut album with Lady Gaga’s producers, among others. Then came her first proper tour. “And I had my very first tour manager, rather than my dad bringing me,” she explains. “He literally upgraded his car so we could fit the drums in, so he was gutted. But it was a sign of progression.”

Her summer diary was filling fast, with slots at Reading, Leeds, Electric Picnic and Wilderness festivals. Her reputation was growing with brooding tracks such as Falling and Mother which earned her comparisons to the ethereal artistes of our time like Kate Bush and Florence Welch, though the endearing transition from otherworldly vocals to the accent that grounds her to her location is more akin to Adele.

“I did feel like this was going to be my year to show people what I’m about and spread my music,” she says. “I’ve definitely lost some momentum by not being able to be on the road. I think that’s where I come alive most. You can’t get your personality across really any other way, bar when people are with you face to face.”

As far as “pivots” go, hers hasn’t been too shabby. While there is no replacing live shows, she did a virtual tour of the US with Live Nation and made her debut Late Late Show performance which helped her achieve her first top-five- hit with New Day. She also contributed a track to the film Riverdance: the Animated Adventure which features the voice of Pierce Brosnan and Brendan Gleeson. The album has progressed too, via email rather than in person.

“Obviously [it] takes a bit longer, but at least it’s getting done,” Lyra says. “But it would be great to have been able to go back to LA and experience being in their presence and soaking up all the information I can. I’ve missed that opportunity to meet them and learn.”

Living in the UK

Lyra speaks from her home in the coastal town of Hove in the UK, where she moved to concentrate on music. The pandemic hit while she was away from her family, which became extra-difficult when her mother was struck with the virus early on, from which she has since recovered. And on a practical note, it meant she fell through the gaps of the UK’s financial recovery package and wasn’t able to claim grants.

“That’s been sad because I pay taxes, and in abundance,” she says. “It’s soul-destroying when you sit down and think about it. I have friends over here who were in part-time jobs who wouldn’t pay as much taxes as me, but are getting financial help. But I’ve tried to switch off from that concern because if you start thinking financially, your creative side is going to go.

“For me, I don’t do music for money. I’ve been fine being a broke musician, so I’m pretty sure for another year I can hold out and work my ass off so that one day I will be in a position where I make money from my talent.”

Although no one knows when the live industry can return next year, Lyra promises to deliver the anticipated album as soon as it’s ready. In the meantime, she’s toying with the idea of starting a podcast – “a light-hearted one, because I love talking to people”.

She is looking forward to Christmas, which she will spend in Cork even if she has to quarantine again.

“I love Christmas. I put up my Christmas tree last year in November because I put such an effort into it, I wanted to show everyone,” she says. “The week before Christmas is my favourite time ever. That’s when I drown myself in mulled wine and eat myself to death with Quality Street.”

If those aren’t some fine plans before what will hopefully – and finally – be her year, I don’t know what are.